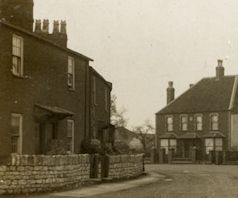 The photograph on the left shows part of Pullins Green in Thornbury.  There is a terrace of six small cottages on the left of the photo each with one window upstairs and one downstairs.  They each have a front door under a porch shared by the neighbouring cottage.  It is difficult to see number 6 Pullins Green in this photograph but its two windows (one upstairs and one down) are second from the left on this photograph and the second gateway leads to the front door under the shared porch.

We had heard that the six cottages were built in the early 19th century for quarry workers, but we have not yet found any evidence to support this theory.  They were built by Daniel Burchell on land he had bought in 1823.  The land was part of a burgage plot bordered by St Mary Street, Horseshoe Lane and Pullins Green.  Click here to read about the early history of that land

The Burchells – the cottages were listed in the 1840 Tithe Survey when they were owned by Daniel Burchell, a carpenter who was then living in St Mary Street.  The cottages were owned by the Burchell family for a long time.  Daniel Burchell died on 16th September 1866 and after a period when they were administered by his Trustees, Jane Burchell, one of Daniel’s children, exercised her right given to the children in his will and bought the six houses from the Trustees for £565.  Jane died on 9th January 1903 aged 78 and her will directed that the properties be passed to her brother, Frederick Burchell.  Frederick died in 1905 and the houses were put up for auction in 1907.  On 9th January 1908 Frederick’s son, Frederick Henry Burchell, bought the six properties, paying £730 for the six properties.  We know that in 1909/10 rents of about three shillings per week (£8 per year) were being paid to Frederick Henry Burchell.  In 1918 the houses were put up for sale at auction as three separate lots of two houses.  Click here to read more

Although the Tithe Survey lists the occupiers of the six houses in 1840, it does not make it clear who is living in each house.  The six people were: John Screen, Charles Owen Pearce (a cordwainer), Mary Jackson, Mary Langobeare, Mary Olive and John Birt.  In many cases like this, we can link people to houses by using the 1841 census.  However in this case it is difficult to link the names in the census to any of these houses and none of the people listed in this census (or the 1851 census) are the same as those listed in the Tithe Survey.

We have gathered some information about the other families who lived in this house.

In 1851 the house was occupied by James Hodges, a master wheelwright aged 39 born in Olveston, his wife, Charlotte, aged 40 from Thornbury and daughter, Martha aged 8.

James was born ‘in Olveston parish’ on 6th July 1811, the son of John Hodges, a wheelwright, and his wife, Sarah (nee Limbrick).  He was baptised in Oldbury on 8th December 1811.  We suspect that they were living in Tockington, where they were living when their net three children were born.

James’s father, John was a carpenter and built the row of houses in Gloucester Road in Thornbury, then called Laburnum Terrace, but now called numbers 6 to 22 Gloucester Road.  We know a great deal about John and his family – click here to read more

On 29th October 1839 John married Charlotte Cullimore at St Pauls Church, Bristol.  John was described as a wheelwright living in Old King Street, Bristol.  Charlotte was living in Charles Street, St James, Bristol and she was the daughter of Joseph Cullimore, a yeoman.

The 1841 census shows James and Charlotte living in Colwell Street Lane, Thornbury, in the row of houses being built by his father.  It is not possible to say precisely which house they were living in, but we believe that it was likely to have been the house now known as 16 Gloucester Road.  The census shows that James and Charlotte had one son at the time, John who was baptised at Thornbury St Mary’s on 28th February 1841. They had a second child, Martha baptised on 5th February 1843 and another, Mary Anne, baptised on 2nd March 1845.  Their son John died when aged only 2 years 7 months and he was buried on 13th August 1843 and Mary Anne died aged 5 and was buried on 24th February 1850.

It is interesting to note that in three Thornbury Trade Directories between 1842 and 1852 James is described as a beer retailer.  We are not sure whether this refers to the period he was living in Gloucester Road or in 6 Pullins Green.  Charlotte died on May 27th 1856 aged 46.  In 1861 James had moved back to Colwell Street Lane, living next door to his father at what we believe to be the house now known as 16 Gloucester Road.  He was a carpenter, a widower aged 48.  Living with him was his daughter, Martha, aged 17 and described as ‘formerly a dressmaker’.

James died on February 15th 1866 aged 55 years.  He and Charlotte are buried in Thornbury St Mary’s in the same grave as his parents.  Their surviving daughter, Martha, married James Noble Greenham on 24th February 1867.  They married in St Pauls Church, Portland Square, Bristol, the same church that her father and grandfather had married in.  James was a photographic artist.

The deeds of 5 St John Street show that when Martha’s grandfather, John Hodges, conveyed number 5 to his son, George Hodges in 1873, he arranged for Martha to receive £8.00 in annual rent.

William Symes – in 1861 and 1871 the house was occupied by William Symes, a journeyman tailor aged 43 born in Shepton Mallett and his family.  The 1880 Rate Book shows that William had moved to 2 Pullins Green.  We know quite a lot about this family.  Click here to read more

John Smith – in the 1880 Rate Book and the 1881 census the house was occupied by John Smith, a carpenter aged aged 68 years.  His wife, Eliza, seems to be working as a monthly nurse in Marylebone, London.  There were 2 grandchildren living with him: George and Ellen Keniston, aged 9 and 8 respectively.

Elizabeth was born in Alveston about 1835, the daughter of Thomas Smith, an agricultural labourer and his wife, Martha.  The 1851 Census shows Elizabeth living at home with her parents – she was a dressmaker.  By 1861 she had moved into Thornbury where she was now working as a housemaid in the Vicarage.k

Mary Knight – in 1901 the house was occupied by Mary Knight, a widow aged 68.  Living with her was a lodger, George Emery, a general farm labourer aged 40 from Dunball in Somerset.

Mary had been born about 1832 in Olveston.  She was the daughter of Thomas Millard, a labourer.  On 16th October 1859 Mary married James Knight at Berkeley.  James was a widower aged 31, a labourer, the son of Thomas Knight, a carpenter.  They were both living in Bevington, near Berkeley at the time.  The 1861 census shows the couple still living in Bevington where James was employed as a slaughterman.  By 1871 James had become the innkeeper at the Crown Inn, Bevington and they were still living there in 1881.  James died and was buried at Berkeley on 21 October 1889 aged 61 years.

We have very little knowledge of more recent occupants of number 6.  The electoral register shows that Hector and Alice M Gill were shown as living there in 1965, although the baptism records show that Terence and Marion Ann Davies were living there in 1962 and 1967 when their son, Stephen and daughter Sarah Jane were born.

Adrian Green – the 1970 electoral register shows the house was occupied by Adrian and Jean Green.  They lived there for a short time following their marriage.  Adrian was the son of Tom and Joan Green who lived for a long time at 5 St John Street which is where Adrian was born.

By the 1960s, the six houses had fallen into disrepair and lacked modern amenities.  They were at one stage condemned by the Council.  They were however saved when the Council chose to renovate and modernise them as part of the town centre development which took place in the 70’s.  On 4th January 1974 Charley Davis sold the four properties he owned to Thornbury Rural District Council for £6500.