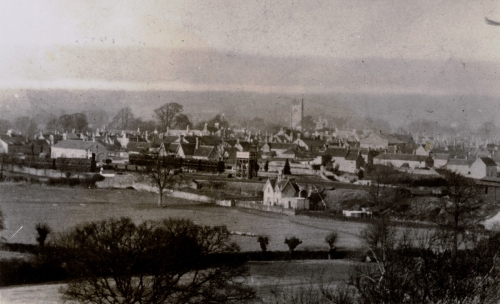 Looking down on the railway station from Vilner

The photograph here shows  a view from Vilner looking over the station and railway line.  It is also possible to see the water tower and station master’s house. Please click on it to see it more clearly.  The building of the Yate to Thornbury line was no easy matter.

A newspaper report of 8th October 1864 reported that Mr Rendall CE (this may indicate that he was County Engineer) was “taking levels” in the Thornbury area.  Presumably this was the beginning of actually surveying the ground for what was an ambitious project.  At this stage the railway was being planned “from the mouth of the Wye, crossing the Severn at Old Passage, from thence by Cote Farm through Elberton to Thornbury on to Wickwar, and to London via Swindon.” This scheme was being proposed by “influential gentlemen” of Newport connected with the coal and iron works of South Wales.  Thornbury’s history from this point could have been very different.

On the 26th November 1864 the proposed methods for crossing the Severn were outlined in some detail in the Bristol Times.  The favoured method appeared to be branching from the South Wales Railway and crossing the Severn by a bridge which finished two miles above Aust (presumably somewhere near Oldbury) and which passed through Thornbury, Cromhall, Wickwar and Malmesbury to Wootton Bassett on the Great Western Railway.

We understand from Ted Oakley’s talk to the Tytherington Local History Group in 1987 that in April 1867 the Committee instructed its solicitors to obtain the necessary land by compulsory purchase and that within a month three cuttings had been commenced.  The section between Yate and Frampton Cotterell was undertaken first.  Ted Oakley also says that “the branch line together with the section of the Thornbury line east to Iron Acton approximately 1 mile and 7 chains was actually brought into operation in May 1868.”

According to another Society of Thornbury Folk newsletter (1966), the “Thornbury Journal” of 1869 reported on the progress of the rest of the line, which sounds very slow.  The tunnel at Grovesend was finally under construction.  The scheme of a bridge over the Severn, which had been authorised by Parliament in 1865, had been abandoned and the suggestion of a tunnel under the river was now being canvassed.  A newspaper report of 20th May 1869 explains that a subway was to be built between the dock at Lydney and the intended basin of the Gloucester Canal at Berkeley.  An “iron tube” was to be sunk in the bed of the river so that the line could be connected to the Midland Railway at Thornbury, the South Wales Union Railway at Pilning and the Bristol Port and Pier of Avonmouth.

The bridge project would have been for its time a sensational piece of engineering and the cost would have been quite enormous.  It would have been over a mile long and the central arch would have had to be high enough for a ship of a thousand tons to bring corn and timber to Gloucester.  A newspaper report of 22nd May 1869 gives more background on why the plan for the bridge was abandoned.  The plan had been passed although the authorities at Gloucester felt the bridge would have been ruinous for the port.  However “Black Friday” and the subsequent monetary depression followed and the plan was shelved.

When the railway began to be built at long last there were different problems.  A newspaper report of 1st December 1869 was headlined “Serious Devastation of Game Preserves at Thornbury.”  The report states that poaching (“with the exception of one or two poachers”) was not a problem in Thornbury, which is surprising in view of the frequency of newspaper reports of poaching and the trials of poachers.  The newspaper refers rather sneeringly to railway workers as the “gentlemen of the line” and said that there had been wholesale destruction of game with landowners afraid or unable to make arrests.  Not one navvy had been apprehended but seventeen of them had been discharged from work on suspicion of poaching.

“Navvies” as they were called caused many other concerns amongst a population used to a quiet rural existence, which is not surprising as one newspaper report of 1869 says that there were 800 of them working on the line and this must have made quite an impact on the small communities in the area of the railway.  On 11th December 1869 there was a rather scandalised report of a navvy causing a minor disturbance in Tytherington Parish Church by walking up to the pulpit during the sermon, taking hold of the clergyman’s surplice and telling him to read louder!  There are many accounts of the hard lives of these railway workers that are more detailed than we can give here.  We can suggest one website Navvyman by Dick Sullivan for further information.

A report of 13th November 1869 gives a rather flowery and long winded description of the railway network but also has some rather interesting information about the progress of the line towards Thornbury. It says that

“The intended South Wales line which is now in rapid progression, leaves the main (line) at Yate, a distance of a little over five miles from Mangotsfield, and passing through some heavy cuttings, alights on a large village of some antiquity, named Iron Acton. …From this village a short branch is made to Frampton Iron Works, from which, when in full working, a good mineral traffic will emanate.  The line on leaving Acton passes over several bridges…. and arrives at Tytherington.  Mineral traffic can now be carried on from this village to Bristol, London and the Midland counties.”

This description sounds very like the idea put forward by Mr Owen, the manager of the Frampton Iron Mines six years earlier in the meeting of November 1863.  Mr Owen said then that the Midland Railway would find it profitable because of the mineral trade but failed to explain why the railway should then be extended to Thornbury.  It is not surprising then to read that the work had been discontinued because of the “immense costs” of cuttings and tunnels to take the line further.  “Two months ago” (presumably in September 1869) work had been resumed and on leaving Tytherington the line now crossed an iron bridge and passed into a deep cutting.  Half a mile on from Tytherington the first tunnel had been commenced at the brow of Castle Hill and when completed it would reach over a mile and then pass along an embankment ranging in height from ten to twenty feet high to reach Thornbury. 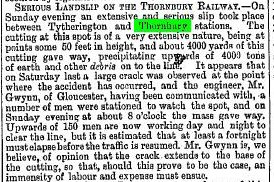 All this work to make the tunnel and to build up the embankment would of course be done by men rather than machines and the work must have been incredibly hard and dangerous.  The mortality rate amongst navvies generally was high, for example in 1841 one hundred men were killed while constructing Brunel’s famous Box Hill tunnel which linked Bath and Chippenham.  In Thornbury the fatality rate seem to have been mercifully fairly low and so far we have found only one inquest on an excavator whose foot was crushed by a stone and who died from blood poisoning after an operation to amputate it.  The man was called William Jervis.

In November 1871 the cutting at Grovesend was completed and the contractor’s wagons could pass between Thornbury station yard and Tytherington to convey the building materials for the new station.  A newspaper article published during that month confidently said that that the station would soon be finished.

The last stretch into the town would be problematic because of the raised embankment necessary to reduce the incline.  There were many landslips during the building work and these continued after the line’s opening as can be seen in the newspaper article above from November 1872.

Ted Oakley says that tenders for building work including Thornbury station were submitted in July 1871 and that of Edwin Niblet of Gloucester accepted.  By March 1872 much of Mr Niblet’s wotk was done and Thornbury station was completed – except for its roof.  Again according to Mr Oakley it was agreed in April 1872 that Thornbury station should have gas lighting at a cost of £70 13s.

The railway was eventually built with the station to the north of what was then Richard Scarlett’s house (Thornbury Villa) at the top of the town near where the Midland Way is now.   The picture above is from a photograph of Thornbury railway station by Mike Edwards. Please click on it to see a larger image.  The water tower in the centre distance of the photograph played a surprising role in supplying Thornbury with water.  Click here to read more.