We are grateful to Gill Watts for the photograph we have above.  It appears to show the railway platform at its hey day.  The flower bed is well tended and the gas lamps are still in place. 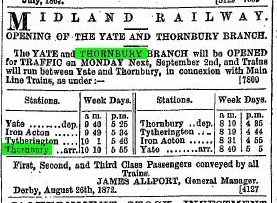 Newspaper reports soon showed that there were problems with the railway line from its earliest days. On 2nd November 1872 there was an article about a land slip in the cutting betweenThornbury and Tytherington stations.  The land slip was said to be very extensive and so although upwards of a 150 men were allegedly working day and night it was likely to be at least a fortnight before the service could resume.  Another, smaller, land slip was reported on 7th December 1872.

The railway however play a role in the commercial life of Thornbury.  A newspaper report of 12th June 1874 for example refers to the cheese market held at the railway station “as usual” which had a large supply of cheese which sold well and was said to be a decided success.

In 1884 on 28th November there was the report of a minor accident to the train which had left Thornbury for Yate the morning before.  Part of the train was derailed but no one was hurt.  The report mentions that there were 20 passengers on the train in two carriages and several goods trucks that were empty at the time.  It does not sound as though the line was very busy.

The railway was able to take advantage of the excitement caused by the Littleton Whale.  On 26th January 1885 an advertisement appeared for a cheap excursion train for Thornbury (the nearest station to Littleton) to go and see the whale which was washed up on the pill there.  The train would leave Bristol at 1.30pm and Fishponds at 1.35 returning at 6.20pm.  The fare there and back was 1s 3d third class.  Read more about the Littleton Whale

The train service was always problematic.  The service never seemed adequate.  There are many reports in the newspaper of dissatisfaction, including that of 15th November 1899 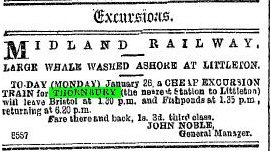 in which the Council voted to ask the Midland Railway Company to run an extra train from Thornbury between 1 and 2pm.  This request seems to have gone unheeded.  It was never very convenient to travel from Thornbury to Bristol via Yate.  The railway did not serve the wider area around Thornbury as well as a bus service could.

The beginning of the end for the trains came with the motor buses.  In 1904 Alveston Parish Council asked the Great Western Railway Company to provide a motor car service between Thornbury and Patchway.  The first motor bus service from Thornbury, provided by the Bristol Tramways and Carriage Company, began in February 1906.  It ran to Horfield, where the Bristol trams ended.  A year later the bus service terminated at Filton, for the trams had been extended to that growing suburb.  Some buses ran through Thornbury to Berkeley.  The buses ran approximately every hour and the fare from Filton to Thornbury was 6d.

As late as 1918 the Gazette of the 9th March was still suggesting that there could be a bright future for the railway line.  The article said that Railway Staff and others

“a large staff of engineers are at present at Thornbury planning out a light railway in continuation of the Midland Railway from Yate to the River Severn for the purpose of conveying stone from the huge quarries at Tytherington …… to the banks of the River Severn at Littleton.”

Despite the problems the railway survived to celebrate its jubilee.  On the right we have a photograph taken in September 1922 of the staff of the railway celebrating fifty years of running the railway line to Thornbury.  It shows the retired station master Mr Charles Cooper amongst others, including John Taylor Chambers who was one of the subscribers to the celebrations of the opening day.  The newspaper article which accompanied this photograph mentions several of the well known employees of the railway, including the guard Mr John Bowker who had retired after 53 years in the service of Midland Railway and George Nichols who having worked for the company for 33 years was well known to the travellers on this line.