The Occupants of 11 Rock Street 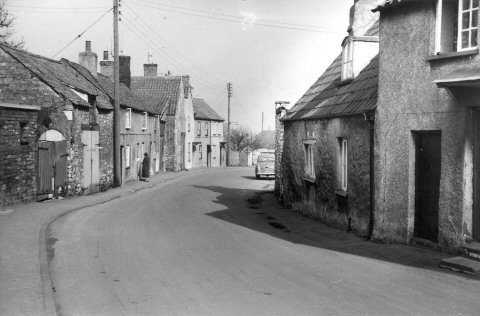 Number 11 Rock Street is the smaller of the two houses shown on the right of the photo above.

An indenture dated 1822 relating to the four houses built by William Cowley on the adjoining land refers to this property as being on the north and east sides ‘late of Richard Collins and Ann his wife, but now of a person called Allen (whose forename was omitted from the indenture), late in the occupation of James Saunders, but now of Charles Cossham’.

Richard Collins – the land tax records of 1780 to 1784 show Richard Collins owning and occupying an unidentified property in Thornbury.  We don’t know anything about Richard or his wife, Ann.

We have had great difficulty in identifying the occupants of each house in the 1841 and 1851 census records so we have not attempted to do so until we get some other supporting sources.  In this case, we know from local knowledge and from the rating books, censuses and electoral registers that the house was occupied by:

Sarah Bendall – in 1861 Sarah was a widow of an agricultural labourer living with her son, George, a mason’s labourer aged 40, both from Cam and a grandson, also named George aged 8 from Thornbury.  Sarah had been the wife of Meshach Bendall.  Click here to read about the Bendalls

Thomas Millard – in the 1885 rate book, the name of the occupant is ‘Millard’.  The 1887 ratebBook shows that Thomas Millard had recently vacated the property.  Click here to read more

John Rugman – according to the 1890 rate book the house was occupied by John Rugman.  We are not sure which John Rugman this refers to, but we suspect it was the John Rugman who married Ellen Hunt in 1886.  Click here to read more

In the 1891 census, the house appears vacant again and was vacant in the 1894 ratebBook.

William Webb – the 1910 rate book shows that the house was occupied by William Webb.  We suspect that he was William Thomas Webb – click here to read more

Luke Higgs – the 1911 census shows that Luke was living in the house.  Luke was described as a pauper aged 74 from Tytherington.  He was living with his wife, Ellen , aged 64 from Berkeley.  Click here to read more

Goliath and Julia Cole– from the early 1900’s the house was occupied by Goliath and Julia Cole.  We know from locals that they were living in 11 Rock Street in living memory.  The earliest record of them living there is the 1914 Prewett’s Directory and when their son, Sidney started at the Council Upper School in 1915.  Click here to read more

Jeffrey and Anita Wilcox  – moved there in August 1960 and stayed for about two years before being re-housed by the Council.  The house was then vacant for two or three more years until it was finally demolished.