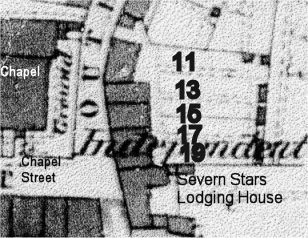 We are disappointed not to have any photos of this house.  It was one of five houses located between the Seven Stars and the Oxhouses.  The house was one of a row of 5 houses owned by the same owners.  Click here to read about the OWNERS

We have had great difficulty in identifying the occupants of each house in the 19th century census records so we have not attempted to do so unless we have some other supporting sources.  The history of occupants is therefore based on what people have been able to tell us, backed up by church records, electoral registers, rating books, school records etc.

William Rugman –  we know from the rating books and censuses that William and his family occupied the house for more than 30 years.  William Rugman was baptised on 9th February 1836, the son of James Rugman, a labourer of Morton and his wife, Elizabeth.  On 13th October 1855 William married Jane Greenman, the daughter of David Greenman.  By 1861 William and Jane were living in the house which later became 17 Rock Street.  William was an agricultural labourer aged 25 and Jane was a milliner aged 24.  They had two children: Mathilda and Samuel John.

In the 1891 census shows that William was still living in the house with his children: Mark a sawyer aged 26, Alice aged 15 and Mary aged 13.  In 1901 William was living with his daughter, Harriet and her husband, William Charles Bryant, a gas fitter and manager at the Gas House.  William died in 1919 aged 84.

William Bendall Jnr – in the 1901 census the house appears occupied by William Bendall, a general labourer aged 29 from Gloucester, his wife, Emily from Olveston and children: Annie Elizabeth born on 8th October 1894 and Elsie Gladys born on 13th January 1897, and William’s father William Bendall, a widower aged 50 from Thornbury.

William was baptised in Thornbury on 5th November 1871, the son of William Bendall haulier and his wife, Angelina (nee Hillier).  By 1891 William had left home and he was a general labourer boarding in Chapel Street.  On 15th May 1893 William had married Emily Millard, the daughter of Thomas Millard, labourer and in the 1896 Voters List William is living in Crossways.  The family were still living in ‘Upper Bath Road’ when the girls started at the Council Upper School in 1902 and 1904 respectively. The house appears vacant in the 1910 rate book.

Theophilus and Sarah Elizabeth Caise – during most of the 1900’s the house was occupied by the Caise family.   Theophilus Gem Talbot Caise was born in Olveston in 1863, the son of George Caise, a stone mason and his wife, Susanna.  In 1881 they were living with his parents in a cottage in Old Down and Theophilus was working as a lime burner.  By 1901 George had died and Theophilus was living in Alveston with his mother, Elizabeth May, a cook aged 26 from Amberley and her child Winifred May aged 2 months.

On 3rd September 1906 Theophilus married Sarah Elizabeth May who was the cook who had been living in his mother’s house in 1900.  Sarah Elizabeth was born in Amberley on 23rd January 1875 and baptised at Amberley Church on 11th April 1875.  She was the daughter of Rameliah May, a gardener and his wife, Amelia.  They were living at Gyddynap, Amberley at the time of the baptism.  In 1881 the family were living at 6 Dyehouse Cottage in Minchinhampton where Rameliah worked as a groom.

The Council School records show that Theophilus and ‘Elizabeth’, as she became known, had several children before they were married.  Amelia was born on 16th February 1900, Winifred born on 21st January 1901 and Albert Edward born on 5th April 1904.

The Voters List of 1907 through to 1913 show Theophilus was living in Horseshoe Lane and this is confirmed by the school records which add that the children left school in 1913 when the family left town.  The 1911 census shows that it was the house later known as 15 Horseshoe Lane where the Caises lived.  They were living there with Winifred Lilian aged 10, Albert Ernest aged 7, William Wintle aged 4 and Edward Jack aged 1.

After their marriage, Theophilus and Elizabeth had several more children: William Wintle Caise baptised on 6th February 1907 at the same time as Albert Ernest, Edward Jack baptised on 1st September 1909, Bessie Matilda born on 29th September 1912 and Stanley Mervyn who was baptised on 7th August 1915 and who died and was buried on 10th May 1918 when the family were shown to be living at ‘Bath Road’.

In 1915 the Gazette reported that Theophilus was failing to maintain his wife and four children who had become chargeable on the rates.  The whole family had been admitted to the Workhouse in December 1914, but Theophilus had left and obtained work at Tytherington Stone Quarries.  Although he was earning about £1 per week and could earn up to 30 shillings if he put the effort in, he had failed to contribute even a small amount towards the maintenance of his family and he had failed to remove them from the Workhouse.  Theophilus pleaded guilty and was sentenced to ’14 days work for the Government in gaol’.

When Bessie started school in 1919, the family were shown as living in ‘Bath Road’.  From 1921 they are listed in the electoral registers as living in Outer Back Street, we assume in the house later known as 17 Rock Street which is where Theophilus was listed as living in the 1926 rate book and where we were told that Elizabeth was living in the 40’s and 50’s.

The marriage records of his children show Theophilus to be a quarryman.  He died on 1st May 1928 aged 65.  His obituary mentioned that he was an old employee of Thornbury Rural District Council.  By 1931 Sarah Elizabeth is listed in the electoral registers as living with William Wintle and Albert Ernest.  The register compiled in 1939 in preparation for the war shows Sarah Elizabeth living there with William Wintle.  She carried on living in that house until at least 1954, after which her daughter, Winifred continued to live there until the house was demolished.

Albert Ernest Caise – was a labourer.  On 2nd February 1932 he married a widow, Sarah Jane Messenger, who lived next door at number 19 Rock Street.  Click here to read about Sarah Jane and Albert Ernest

William Wintle Caise – ‘Bill’ is shown in the photo on the right.  He became a general road worker.  The register compiled in 1939 in preparation for the war  describes Bill as a road labourer in a tar spraying group.  He was living with his mother in 17 Rock Street.

Bill married Vera Grace Ginn on 28th September 1946.  Vera was aged 26, the daughter of John Ginn, deceased labourer and his wife, Sarah.  She had been working as a nurse at the Thornbury Hospital for four years prior to the marriage.  William and Vera settled in 21 North Road where they had Colin Stanley born in 1947, Judith Anne born in 1949 and Lawrence John in 1951.  Bill died in 1964 aged 57.

Edward Jack Caise – he died on 28th March 1929 in the Military Hospital, Carisbrooke, Newport, Isle of Wight.  He was serving as a Lance Corporal in the Oxfordshire and Buckinghamshire Light Infantry.  He was aged 19.  He was brought back for burial in Thornbury Cemetery on 2nd April 1929.

Bessie Matilda Caise – was admitted to the Thornbury Grammar School on 15th September 1924.  She became a post office assistant.  In 1932 the Western Daily Press reported that Bessie had been a pillion passenger on a motor-cycle driven by Cyril Martin Bailey of Eastland Road in Thornbury when it collided with a motor coach near Berkeley Road station.  Bessie was thrown off the bike and not seriously hurt although she was unconscious when she was taken to Berkeley Hospital.  The driver was killed almost instantly.  The inquest decided that the motor-cyclist had been travelling rather fast but that the coach driver was driving without due care.  On 18th June 1936 she married Raymond Thomas Baker, a police constable of Gloucester.  He was the son of Mr & Mrs G. Baker of The Close, Alderton and Raymond had been stationed in Thornbury until just before the wedding.