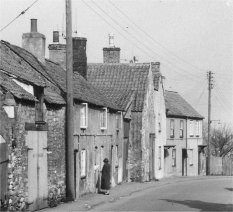 We are disappointed not to have any clear photos of the property.  The one on the left was taken from a street photo.  Numbers 16 – 20 Rock Street were the three houses where the lady is standing on the pavement.  Number 20 was the house just past the first telegraph pole on the left.

We are fortunate that South Gloucestershire Council have allowed us to see the deeds of this and several other adjoining houses.  They show that the three houses (later known as 16, 18 and 20 Rock Street) were built at the eastward end of a garden of a property in St Mary Street.  The house on St Mary Street had been a single building, but later converted into three houses which became known as 47, 49 and 51 St Mary Street.

The deeds show that the house in St Mary Street and one of the houses in Rock Street (believed to be the one later known as 20 Rock Street) were built by Thomas Hulbert on an area of orchard.  Thomas was a carpenter of Thornbury when he bought the orchard from Andrew Buck on 21st July 1716.   Later two more houses were built adjoining this house and these became known as 16 and 18 Rock Street.   Click here to read about the OWNERS

We have had great difficulty in identifying the occupants of the house in the census records so we have not attempted to do so unless we have some other supporting sources.  The history of occupants is therefore based on what people have been able to tell us, backed up by census, rate books, church records, electoral registers, school records etc.

George was born in Codrington in Gloucestershire about 1811.  Of their children, Aaron, Elizabeth and Emma were baptised in Thornbury, but there is no sign of George’s marriage and the baptism of James in Thornbury’s records.  It would appear that Mary Ann died aged 35 and was buried on 24th June 1846.

On 9th April 1850, George was charged at Gloucester Quarter Sessions with ‘feloniously stealing at Thornbury on the 3rd April 250lb weight of flour and two sack bags the property of George Cossham’.  George Bennett was described as being ‘ a Thornbury labourer, height 5ft 8.25 inches with brown hair, dark grey eyes, long visage and fresh complexion and a quantity of moles on chest right side and back and scar on left hip.  He was a native of Thornbury, a widower, who worked last for Robert Screen at Kington near Thornbury for 9 months.  His religion was described as ‘Meeting’.  On 2nd July 1850 he was found guilty and sentenced to 6 calendar months hard labour in the Penitentiary.  His conduct was noted as being ‘orderly’.  He was released when the term expired on 1st January 1851.

In the 1851 census, George was a widower living at Kington with his daughter, Emma aged 10, and son Edwin aged 6 and a lodger, Charlotte Moxham a widowed seamstress aged 42 from Tytherington, and her daughters Jane aged 5 and Equilla, a dairy maid aged 19, and Equilla’s son, Frederick aged 1.  We can find no sign of George in later censuses, but there is a record in FreeBMDs of George Bennett who died in 1871 aged 60.

Thomas Maslin – the 1880 rate book and 1881 census show that the Maslin family was occupying the house.  The rate book shows that Thomas Maslin was there, but by the 1881 census Thomas is a baker aged 42 lodging in Chippenham.  Only Martha is listed as living in the house with her children.  Martha was aged 48 born in All Cannings in Wiltshire.  She had three children living with her: William Thomas a tailor aged 18, Henry a groom aged 16 and John aged 14, all born in All Cannings.  Martha’s mother, Jane Fisher, a widow aged 77 from Stanton in Wiltshire is also living with the family.

In 1871 all the family had been living in Nettleton where Thomas was employed as a baker.  The 1891 census shows that Martha, now a widow had returned to live alone in All Canning where she was ‘living on her own means’.

George Martin – the 1885 rate book shows the house was occupied by George Martin.  We don’t know anything about George.

Walter Tanner – we believe that the name of the tenant in the 1887 rate book is ‘Walter Tanner’, but the surname is difficult to read so it could be something similar.

George Cornock – the 1891 census shows that the house was occupied by George Cornock.  George was an agricultural labourer aged 53 born in Alveston, living with his wife, Jane, a nurse aged 53 born in Elberton and their children Ellen, a cook aged 24 from Iron Acton, Jane a domestic servant aged 15 and John aged 12, both born in Thornbury.

George was the son of James and Hester Cornock of Alveston Down.  On Christmas Day 1867 he married Jane Williams, the daughter of Absalom Williams, a labourer.  In the 1861 census Jane had been living in an unidentified house in Rock Street with her three illegitimate children, William Thomas aged 5, Sarah Ann aged 2 and Henry Edward aged 1.  The 1871 census shows a puzzling scenario – he is living with Jane in Acton Lane, Iron Acton.  We are pretty sure that it is the right family as Jane was aged 36 and was born in Elberton.  They are listed as living there with 3 children: Sarah Ann aged 13, Laura? aged 8 and William George aged 3.  It turns out that Sarah Ann and Laura were Jane’s illegitimate children (at least we have found the baptism of Sarah Ann whose mother was Jane).

In 1881 George and Jane had come to Thornbury and were living in Chapel Street.  George was an agricultural labourer aged 45 living with Jane aged 45 and their children: William G aged 13, Eleanor M aged 9, Charles aged 7, Sarah Jane aged 5 and John aged 3.  The 1887 and 1890 rate books show George was living at the house which became known as 3 Bath Road.

Having moved to 20 Rock Street by 1891, George and Jane were still living there in the 1901 census.  Their son, John, was also there although he was employed as a stoker on the HMS Antelope.  Jane died aged 69 and was buried in Thornbury Cemetery on 27th December 1906.  Their address at that time was John Street.  The 1911 census shows George was lodging with William Sims in 16 Chapel Street.  George died aged 77 and he was buried in Thornbury Cemetery on 11th March 1918.  Click here to read more about their son, William George

Fanny Cann – the 1905 and 1910 rate books show that the house was occupied by Fanny Cann.  In 1901 census Fanny was living in the High Street, at the house which later became number 61 High Street.  Fanny was a widow aged 74 born in Exeter.  She was noted as being ‘in receipt of parish relief’.

In this case, we are told that the house changed occupancy many times during the 1900’s until it was demolished in the early 60’s.  The following families are the only ones so far identified:

Mary Gough – the 1925 Valuation list and 1926 rate book show that the house was occupied by Mary Gough.  We suspect that Mary was the Mary Jane Gough who had earlier been living in Horseshoe Lane.  Click here to read more

Walter Mervyn Ford – we understand that Walter Mervyn and Winifred Kate Ford were living in the house in the late 1920’s and early 1930’s.  Walter was born in Thornbury in 1897, the son of Thomas Ford, a market gardener and his wife, Sarah (nee Stagg) who lived in Morton.  The 1921 electoral register shows Walter was living in Morton.

In 1923 Walter married Winifred Kate Reeves.  They appeared to settle in 20 Rock Street.  The 1927 electoral register lists just Walter, but the Council Infants School records show that when their first child, Walter James (born on 12th September 1924) started at the school they were living at Rock Street.  They had several other children: Edna Joyce was born on 6th May 1927, Mervyn John born on 26th February 1931 and Kathleen Joan born on 25th June 1932.  They are listed as living in Rock Street in the electoral registers of 1931 and 1935, but about 1935 they moved to the new council houses in Bath Road.  Walter died aged 43 and was buried in Thornbury Cemetery on 14th August 1940.  The burial record describes him as a labourer living at Market Site Council Houses.  ‘Kate’ carried on living in Bath Road until in the mid 1950’s she moved to 34 Eastbury Close.  In 1948 Walter James (Jim) married Doris Kate Smith from Tytherington and they were to settle in Park View Avenue.

Reginald Legge – we have been told that Reg lived here for a short time.  The 1938 electoral register shows Reginald and Elizabeth Legge living at ‘1 Bath Road’ which we assume is the same house which later became known as 20 Rock Street.  Reginald Ernest Lewis Legge was born on 19th July 1916, the son of William George Legge, a market gardener and his wife, Matilda (nee Lewis).  Reg married Elizabeth Josephine Kelley in the Aylesbury area in 1937.  They had a son, Christopher Neale Legge born on 21st February 1937.  Reg and Elizabeth divorced in 1946 when Reg was living at Gillingstool.  We understand that although Reg was given custody of his son, he was later abducted, presumably by his ex-wife, and never seen by Reg again.  The Cradle Book of the Congregational Church shows that Christopher left the district in 1939.

It appears that Reg married again in 1946.  His second wife was Evelyn M. Pedder.  Again the marriage took place in the Aylesbury area.  There is no record of Reg living in Thornbury after this time.  He died in Luton in 2004 aged 88.

The Dickersons – on 4th October 1950 Ernest Frank Dickerson bought 20 Rock Street from William Thomas Lambert and his wife, Florence Beatrice.  They had bought the house for £450 on 20th February 1946 from Sarah Jane Ball of Alveston.

Ernest paid £420 for the property.  In 1954 Ernest F & Rosa L Dickerson were shown as living in 20 Rock Street.  We were told that they had a son called George Dickerson, and that they moved to Thornbury from elsewhere and that they moved to live in Alveston after living for a short time in Rock Street.  On 29th August 1963 Ernest Frank Dickerson sold the property to Thornbury Rural District Council for £50.  At the time of the sale Ernest was living at 9 Quarry Mead, Alveston.

Olive C. Golding – the 1961 electoral register shows that Olive was living in the house.  We don’t know anything about her.

On 29th August 1963 the property was sold by Ernest Frank Dickerson to Thornbury Rural District Council for £50. The house was demolished and the land incorporated into the St Mary Street Car Park.