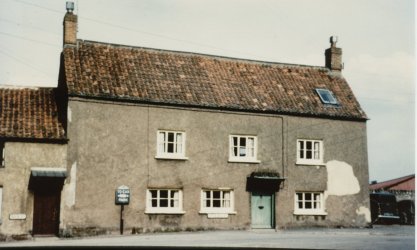 The 1840 Tithe Survey shows this property as Plot 118, a house and garden owned and occupied by Thomas Rutler.  We believe that his correct name was Thomas Butler.

The earliest record we have seen of this place being called ‘The Seven Stars’ is an indenture dated 1821 which refers to a ‘messuage late of William Reed deceased but now of Daniel Reed formerly called the Seven Stars’.  Another indenture of 1839 repeats that description.  Click here to read about the Butlers and Reeds

We know from earlier land tax records dating from 1780 that both William Reed and his son Daniel Reed lived in this area of the town, presumably in this house.  We don’t know when the house became used as a beerhouse – William was a cordwainer (shoemaker) in 1770’s when two of his children were baptised.

In the 1841 census they refer to the ‘Seven Stars’ in the enumeration route description.  The census listing doesn’t mention the place by name although because of the Tithe Survey findings we suspect it was the one occupied by Thomas Butler, a carpenter.

The 1851 census shows the building was once again being used as a beerhouse.  The beerhouse keeper was Thomas Bevan.  Thomas is listed in the trade directories as beer retailer in 1849.  The 1851 census names the house as The Seven Stars and shows that Thomas also worked as a pig dealer to supplement his income.

It carried on trading as a beer house until the late 1880’s.  The 1861 census shows it was run by Henry Keel and his wife, Elizabeth.  After Henry died in 1865, Elizabeth carried on and she is listed in the 1871 and 1881 censuses as Elizabeth Craddock after marrying again in 1870.

We know that Elizabeth Craddock was the licensee of the Seven Stars in 1884 because on 17th April of that year she was fined 10s and 14s and 6d costs for permitting drunkenness of her premises.  Her licence was endorsed.  The drunk in question was Thomas Wilson who was fined 10s.

After Elizabeth, the 1891 census shows that the Seven Stars had become a lodging house run by William and Sarah Ann Hicks.  They carried on until the late 1890’s.

We know from the rate books from 1876 to 1910 that the property was owned by Abraham Cole or his Trustees.  In 1910 an auction was held to sell off the property belonging to the late Abraham Cole.  Abraham had died in 1883 aged 73, but his property had been managed by Trustees since that time. Lot 14 of this auction was ‘The Seven Stars, a freehold dwelling house and garden now in the occupation of Mr Leonard Smith’.  The house contained six bedrooms, two front sitting rooms, kitchen, pantry, and wash and coal house.  There was a capital garden and a well-built pig-sty.  The property was then being used as a lodging house.  There was a small borough rate of 6d per annum.  It was noted that the wooden pig-sties, hut, tool house, fowl house and fowl runs were the property of the tenant and not included in the sale.  We don’t know who bought the property then it was put up for sale again in 1919 and 1921 when it was still a lodging house with five bedrooms occupied by Len Smith.  The 1926 Rate Book shows the owner as H. L. Hardwell.

Leonard Smith – acquired the property at some stage after 1926.  The 1901 census shows that the lodging house had been taken over by Leonard and Elizabeth Ann Smith.  The 1911 census shows that there were 19 lodgers in the house, in addition to the 6 members of the Smith family, al living in what is described as a house with nine rooms. The Smiths continued to run it until the mid 1930’s.

Following Leonard’s death in 1937, Elizabeth carried on living there and we believe she carried on with her lodgers.  She died in 1950 aged 75 years and she was buried in Thornbury Cemetery on 29th March 1950.  Click here to read about Leonard Smith

The property was advertised for sale at auction on 18th April 1950 as the ‘Estate of Leonard Smith deceased’, presumably following the death of Elizabeth Smith.  It was described as ‘a valuable semi-detached house with large garden situate at Upper Bath Road and adjoining the Cattle Market, formerly known as ‘The Severn Stars’.  The house is stone-built roughcast over and has a tiled roof.  It comprises on ground floor: large front living room with oven grate and good cupboards, front sitting room, back kitchen with sink and larder.  On the first floor are three bedrooms with two staircases and there are three attic bedrooms on the second floor.  Company’s water and electricity and all main services.  There is a large garden at the rear having wash-house with boiler, store and coal sheds and pigsties thereon.’

The house then became just a private house. It was advertised for sale again 1958.

Mrs Marion H. Hill was the last owner of the property and she was living there at the time the property was acquired by the Council in the 1960’s.  Marion moved to 44 Castle Street in 1967.  Click here to read more

We understand that the large garden at the rear of the property was used as a piggery, possibly owned by Thompsons of the High Street.  People still remember the pigs being driven in and out of the garden through the only access way – the front door!

The buildings were demolished in the late 1960’s.