The Occupants of 6 Rock Street The photograph above shows the row of four houses, numbered 2 to 8 Rock Street.  Number 6 was the house where the man is standing outside.

We have had great difficulty in identifying the occupants of the house in the 19th century census records so we have not attempted to do so until we get some other supporting sources.  The history of the occupants shown is therefore based largely on what people have been able to tell us, backed up by church records, electoral registers, school records etc.

Oliver Screen – in the 1871 we believe that Oliver and Lucy Screen may have been living in this house.  They now had 4 children living with them: John aged 9, Albert 3, Edward 2 and Eliza aged 1 week.  Click here to read more about Oliver & Lucy

Luke Higgs – the 1881 census shows that the house was then occupied by Luke Higgs, a widower aged 45 working as a labourer.  Click here to read more

Luke Dixon – the 1887 rate book shows Luke as the tenant of this house.  Click here to read more

Jonathan W Hewer – the 1891 census shows the house was occupied by Jonathan W Hewer, a horse carter aged 25 from Collen in Wiltshire, his wife, Sarah A aged 35 from Rudgeway and their daughter, Louisa J aged 5 who was born in Littleton on Severn.

Jonathan William Moses Hewer was the son of George and Ann F.M. Hewer and in 1871 they were living in Rhymes Cottages, Shrivenham.  Jonathan came to Thornbury and married Sarah Ann Williams at Thornbury St Marys Church on 5th October 1885.  George was a labourer and the son of George Hewer a labourer.  Sarah Ann was the daughter of James Williams, labourer.

By 1901 Sarah Ann was a servant in Almondsbury and her daughter, Louisa, was a servant in Bristol.  Jonathan was nowhere to be seen and we don’t know what happened to him until he died in Cardiff in 1916 aged 50.

James Collings – the 1901 census appears to show the house was occupied by James Collings, a general labourer aged 52.  James was born in 1848, the son of James Collings, a labourer and his wife, Ruth.  In 1851 the family had lived in ‘Mumblies’.  The 1861 and 1871 censuses show James away from home working ‘in service’.

In 1873 James married Sarah Ann Burford, the daughter of William Burford, a labourer. By the 1881 census, James had become a haulier and he and Sarah Ann were living in Morton with six children: William aged 9, Annie Mary aged 7, Ellen aged 5, Matilda aged 3, Susan aged 2 and James aged 4 months.  In 1891 James was a general labourer living in Hackett Lane.  The census shows that he and Sarah Ann had had a further three children: Mary Ann aged 8, Ada Harriet aged 3 and Eva aged 1.  They had another daughter, Sarah Ann born in 1887 who died in 1889. 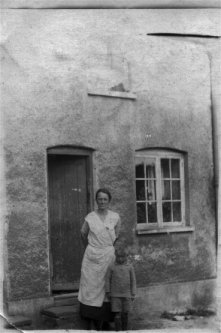 In 1901, when James was living in 6 Rock Street, Sarah Ann was shown as a baker aged 48 and living in Chapel Street with five of their kids.  They had had a further 2 children since the last census: Clara aged 7 and Siscelia aged 6.  It would appear that James and Sarah Ann had twelve children.

Charles Smart – the 1911 census shows Charles was living in the house.  He was described as a builder’s labourer aged 24 and born in Thornbury.  He was living with his wife, Maud aged 21 and daughter, Dorothy.

Charles was baptised on 7th December 1884, the son of Henry Smart, a labourer and his wife, Mary Ann.  In 1891 the Smarts were living at 7 Rock Street.  Charles married Maud King in Thornbury in 1908.

Frederick Wilcox – notes in the Wilmott documents indicate that Frederick had lived in the house at some time before Victor Neal.

Victor Neal – in the rest of the 1900’s, we only know of one family, that of Victor Neal, who occupied 6 Rock Street from about 1920 until it was demolished in 1958.  The photo on the right shows Daisy Neal with her son, Arthur, outside 6 Rock Street.  Click here to read more