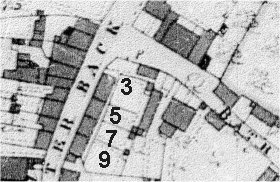 Hannah Hopton – the 1876 rate book and the 1881 census show that the house was occupied by Hannah Hopton.  In the census Hannah was a widowed charwoman aged 85 and noted as being deaf.  Hannah carried on living here until her death on 19th October 1883.  Click here to read more about Hannah

Henry Smart – the 1885, 1887 and 1890 rate books show the house was occupied by Henry Smart.  There is nothing more to identify Henry, but we suspect he was the Henry, baptised on 3rd September 1865, the son of William Smart, a labourer and his wife, Hannah.  In 1881 Henry was a labourer living at 47 St Mary Street with his widowed mother.

The 1891 census shows the family living in Crossways with their children: Charles aged 6, Jane aged 5 and Albert aged 2.

In 1900 Henry Smart was shown in advertisements for the sale of The Dingle in Gillingstool as a tenant of that property .  We do not know how long he lived there.

The 1901 census shows that Henry and his family were again living in Crossways with two extra sons: William aged 10 and Thomas G aged 2.  It appears that Henry and Mary Ann separated at some time after 1901.

By 1911 Henry was a boarder living at the Seven Stars, Len Smith’s lodging house.  He was employed as a carter.  Mary Ann was a charwoman living alone a few doors away at 13 Rock Street.  Click here to read more about Mary and their children

Mark and Florence Dixon – the 1899 rate book shows the house was occupied by Mark Dixon.  Mark had actually died in August 1898 and the 1901 census shows that his widow, Florence was living in the house.  The rate books show that Florence continued to live in the house until at least 1910.  Click here to read more

In this case, we know of four families who occupied the house in the 1900’s:

Giles Reed – on 11th August 1913 when the cottages were bought by James Bevan this cottages was occupied by Giles Reed.  Giles was born in Tetbury about 1836, the son of Charles Reed, a baker and his wife, Mary.  Charles died in 1849.  Giles became an agricultural labourer and he moved to the area around Almonsdbury and Patchway.  In 1857 Giles married Anna Maria Hunt who was born at Durdham Down, Clifton.

The 1871 census shows them living near Hempton, Patchway where Giles was working as a mason’s labourer.  They had three children: James aged 12, Stanley aged 5 and Charles aged 3 months.  The 1881 census shows Giles as a cowman and they were now living at Highwood, Patchway.  Living with them were Stanley aged 15, William aged 10, Josiah aged 6 and Ada M aged 9.  The 1891 and 1901 censuses show Giles as a brickyard labourer living on Patchway Common at a house called ‘Mapling’.  Giles died in Thornbury in 1915 aged 79.  Anna also died that year aged 77.

Thomas Lanfear – an indenture dated 1931 at the time the cottages were sold to Frederick Bishop shows that the cottage was then occupied by Thomas Lanfear.  In 1925 and 1926 Thomas had been listed in the valuation list and rate book.  We don’t know any more about Thomas to enable us to identify him although we note that a Thomas Lanfear was buried in Thornbury Cemetery on 20th June 1938.  He was a labourer aged 78 and died in ‘Thornbury Institution’.

We know that their son, William (or Bill as he became known) moved to Thornbury where he married Winifred Eliza Bennett in 1932.  Charles was described as a collier at the time of his son’s marriage.  There was no sign that Charles or Florence Stewart moved to Thornbury to join their son until 1938.  At that time Charles is shown in the electoral register as living in Outer Back Street.  As only Charles is listed it is presumed that Florence must have died and Charles moved to Thornbury to live close to his son and his wife who at that time were living in 1 Sawmill Lane.  Click here to read more

The 1939 register compiled in preparation for the war shows Charles was living on his own in 7 Rock Street.  It gives his date of birth as 16th February 1885 and confirms he is a widower working as a road labourer.  Even with his date of birth we have been unable to trace Charles’s earlier history.

We have been told that Charlie ‘took in bets’.  We don’t fully understand what this meant but it was well before the time when betting shops became became legal.  Charlie died in November 1945 aged 60.  He was buried in Thornbury Cemetery on 15th November 1945.  The burial register shows he died in Bath Road, but his obituary shows he was living in St Mary Street, presumably with his son.

The Smiths
The 1946 electoral register shows the house was occupied by John E Smith and Irene F Smith.  John (known locally as ‘Jack’) was born in 1902 and baptised ‘John Elias Smith’ on 2nd November 1902 at Thornbury St Mary’s Church.  He was the son of Elias Smith, a groom and his wife, Alice Maud Haines who had married in Devonport in 1901 when Elias was stationed there as a soldier.

The electoral registers show Jack lived at home with his parents in 12 Upper Bath Road until at least 1938.  In 1938 Jack married Irene Frances Woodward in Tytherington.  Irene was born and educated in Tytherington, the youngest of ten children of quarryman,  William Thomas Woodward and his wife, Frances.  In 1911 the Woodwards were living in Station Road, Tytherington.  Irene went into service on leaving school.   The 1946 electoral register shows Jack and Irene were living at 7 Rock Street.  They lived there until the house was earmarked for demolition in the early 60’s when the Council re-housed them in 5 Buckingham Parade.  They were living there in the 1961 electoral register.    They carried on living at Buckingham Parade until they had to move into a nursing home at Frenchay.

Jack’s obituary says that he started work in the butchery trade and was then employed in Tytherington Quarry.  We have been told that Jack worked for the Council and that following his ‘official’ retirement he used to clean the bus shelters in the town.  Irene died on the 26th December 1993 aged 90 and Jack died on 24th December 1995 aged 93.