We don’t know when the house that later became 1 Saw Mill Lane in Thornbury was built.  We know it was there at the time of the 1840 Tithe Survey which shows the house was owned by George Taylor and occupied by Jane Hopkins.

It seems possible that the Indenture of 24th March 1812 between James Withers and John Nibblett which describes 21 St John Street also gives a clue to the origins of this house.  The ground on which this house was built was described in the document as “a small piece of inclosed copyhold garden ground late of William Taylor deceased” on the Eastward side of 21 St John Street.

This would imply that there was no house at that time and that the land was owned by William Taylor before George Taylor.

We have traced a William Taylor, a “gardiner” who married Sarah Bayley in 1782.  William and Sarah’s children included George born in July 1805, Mary born 1783, Flower born 1801.  The 1841 census shows a George and William Taylor who were farming in Sibland on the outskirts of Thornbury.  The 1851 census shows that they still farming and that were brothers and unmarried.  The 1859 Rate Books shows that George still owned this property and the 1862 shows it was owned by the ‘late George Taylor’. 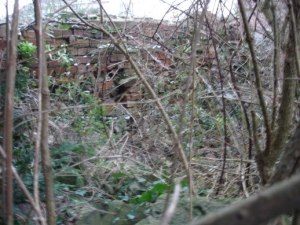 We have not found anything about this family yet and cannot prove whether or not they were the owners of this property in Thornbury.

We do not have any decent photos of the house.  The one of the right above shows what is left of the house.  We were delighted when we were given the aerial view of the area shown on the left.

The little house is the one directly below the text.

We are grateful to Ron Holpin who spent his childhood in the house for his recollections of it.  He told us that the front door opened directly into the living room.  There was a back kitchen under a lean-to corrugated iron roof.  The rear wall of the house was also the garden of number 21 St John Street, and there was a window in this wall through which Ron remembers his mother chatting a lot to Mrs Staite who lived there.  Attached to the lean-to was a toilet which in Ron’s time, had a flush toilet.

There was a closed-off staircase in the living room which led upstairs.  Under the staircase, the family kept their coal and sat during the Wartime air-raids.  Upstairs, there was a double bedroom and a bedroom over the lean-to.

Apparently the house was very damp and in a very poor condition.  Ron says it was condemned all the time the family were there, but people continued living there for several years after the Holpins moved out in 1952.

John Grove – the rate books of 1876 to 1885 show that the owner of this property was John Grove.  The deeds of number 5 St John Street refer to the fact that ground attached to number 5 was bounded on the East side by a road leading to property owned by George Taylor and and now of John Grove.  It is likely that this was John Wetmore Grove who in the 1881 Census was living on The Plain with his son-in-law, James Bevan who was the next owner of the property.  John was a carpenter born about 1816 in Hill.  In the 1851 census he was living in Rockhampton with his wife, Hannah and their children, Anna Maria aged 5 and Decimus aged 3. Hannah died aged 66 and was buried in Hill on 7th March 1879.  John Wetmore Grove died aged 69 and was buried in Hill on 21st December 1885.  On his death the property seems to have passed to his daughter, Anna Maria and her husband, James Bevan.

James Bevan – the rate books between 1890 and 1910 show that the house and garden land between the house and St John Street was owned by James Bevan. James was the son of  Thomas Bevan the beerhouse keeper and his wife Anne.   The 1891 census shows that he was 36 and born in Thornbury.  His wife Anna was 41 and from Berkeley.  They had a 12 year old son Albert E Bevan who was a scholar.  They had his 80 year old aunt Elizabeth Smith living with them.  She was a retired grocer.  Click here to read more about James Bevan

By 1901 Albert E was a musical student. In this census Anna was from Peddington.  Read more about Albert E Bevan

Edmund Cullimore – later acquired the house and in 1958 it was put up for sale by his estate.  It was described then as a storeroom which was being let to W.D. Woodman at a rental of 7/6d per week inclusive.  Its rateable value was £8. It had three rooms on the ground floor with offices over.  It was connected to mains electricity and water was provided from the pipe leading from the railway station.  Click here to read more about the provision of water in Thornbury