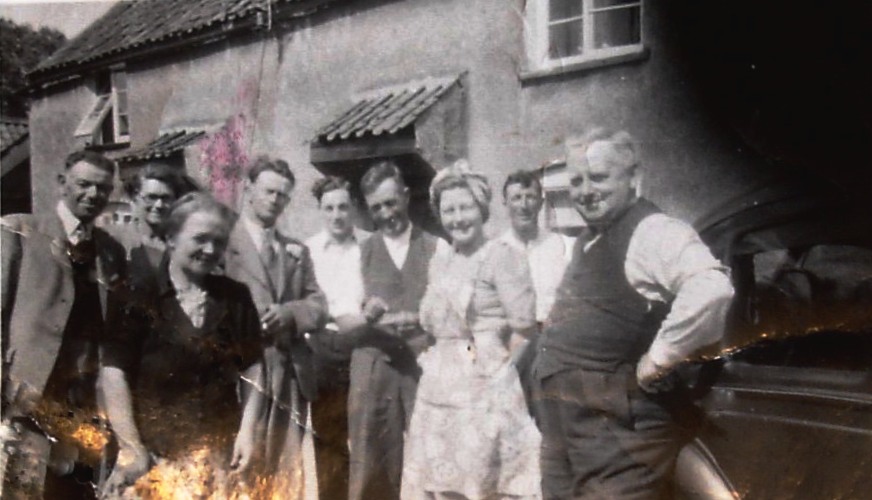 Number 2 Saw Mill Lane has long since disappeared.  The photograph above is the best we have found so far which gives an impression of what the pair of houses, known as numbers 2 and 4 Saw Mill Lane, were like.   The photo shows various members of Bill and Doris Holpin’s family who lived at number 4, together with a few friends.

We have no knowledge when the house was built, but it was there at the time of the 1840 Tithe Survey when it was owned by George Taylor.  There were two houses in the same plot and we can’t really be positive who occupied each house.  We have assumed that number 4 was occupied by Aaron Newman, the other occupied by Thomas Barge.  The two properties were still being owned by George Taylor in the 1859 rate book and the 1862 rate book shows it was owned by the ‘late George Taylor’.  The books from 1876 to 1885 show John Grove listed as the owner.  In the 1890 rate book Edmund Cullimore had become the owner.

With the opening of the Saw Mill about 1889, the house was generally used by workers at the Saw Mill and their families.  When the estate of the Mill’s owner, Edmund Cullimore, was being sold in 1958, numbers 2 and 4 were described as a pair of stone built and tiled cottages with a large shed at the side.  Mrs S. Taylor was occupying number 2 at a rental of 5 shillings per week inclusive.  It was advertised ‘as comprising a front sitting room with tiled grate, kitchen and scullery with 3 bedrooms over’.  The rateable value was £11. Gas and electricity were laid on and water provided from the Railway Station.  We were curious to know what the term ‘Railway Water’ meant and looked around for the answer.  Click here if you would like to know more

The shed referred to in the joint lot had previously been the cart house for the Saw Mill.  This was advertised as being 25ft x 25ft 6 inches (maximum) and has a long and deep inspection pit and is constructed of timber and cast iron sheets.

The properties were bought by J. F. Voisey and son, local builders.  They went on to build houses on other land purchased from the Cullimore, but they did not use the land in Saw Mill Lane.  We are not sure when the houses were demolished.  They are shown on a 1966 plan drawn up by the Council when re-developing the shopping centre, although there is no-one listed as living in the houses in the 1965 electoral register.  By 1969 the land had been incorporated into what became the works depot for the Thornbury Rural District Council.

see the occupants of this house
Toggle Sliding Bar Area