How it was introduced into Thornbury 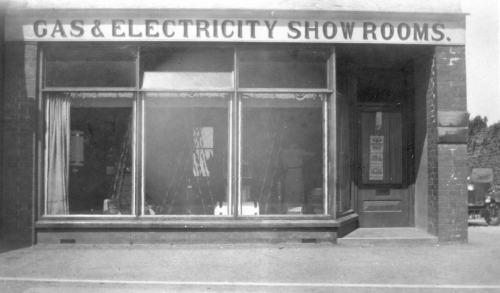 Thornbury Rural District Council announced that from 21st December 1903 it would apply to the Board of Trade for the necessary powers to generate and supply electricity to Thornbury.  These powers would enable the Council to acquire the necessary land and to take up roads and pavements in order to lay electric cables.   The plan produced at the time indicated the firm intention to supply electricity to all of central Thornbury.  The area to be covered is marked in blue on the map below.  The plan seemed very ambitious but we have not yet traced what actually happened as a result of this decision.  It does not seem to have brought about any immediate action. It seems that large private houses had their own electricity supplies long before the town had a public supply.  We know from looking at the applications for exemption from the First World War that are held in Gloucestershire Archives that George Cook of John Street was not only gardener for Captain Bennet at the Parks but that he was also employed to work the electric light plant there and had been doing so for five years before 1916 when he completed the application.  The same applications show that George Taylor of Castle Street was employed on similar terms by Lady Jenkinson (he had previously been employed at her Eastwood Park home to run the gas plant there).

It appears to have been left to private enterprise to take practical steps to bring electricity to the town as a whole.  The trigger seems to have been the marriage of Helen Garfield Cullimore, the daughter of Edmund Cullimore the owner of the Saw Mill to Francis Grace an electrical engineer in the September quarter of 1907.  This seems to have combined the electrical “know how” with the necessary financial backing and entrepreneurial spirit.

Two letters to Francis Grace from his father Edward Mills Grace, both dated 21st February 1906, show that even before his marriage Francis was giving some thought to becoming involved in Mr Cullimore’s scheme of bringing electricity to Thornbury.  Edward was against the scheme for two main reasons reasons.  The first was that

“The people in Thornbury are not go ahead enough to take the electric light and I should think they would want a guarantee not only that it was to be kept going but also that the price should not go up.”  The second reason seemed to be based in a more practical aspect of the matter.  “I think you will find any scheme of lighting Thornbury is impossible.  Some other company have the right by Act of Parliament and most likely the Gas Company could prevent anyone else doing it.  So no canvassing at all until you find out this.”

We believe that Francis must have enquired further and found that there was no competition as he went ahead with the scheme.  Thornbury Gazette credits Francis Grace with the introduction of electricity to Thornbury as early as 1906, which suggests that he wasted no time.  However we still have no record of when any property that was not directly owned by the Grace and Cullimore families was actually connected to this electricity supply.  Read about Francis Grace

We have learned from Professor Jack Pridham, the son of Bert Pridham, who did a great deal of the work involved in installing the electricity supply in Thornbury, that the earliest electricity in Thornbury was produced at the Saw Mill to provide power to drive the sawing equipment there.  For those of our readers with an interest in the technical matters, Professor Pridham told us that he believed that the whole system was powered by a ‘producer gas engine’.  He said that “its operation was highly sustainable using burning Saw Mills’ waste as a source of inflammable gases.  The engine which had sparked ignition, had two horizontal cylinders from which came connecting rods which powered a very large flywheel; this was ridged around its circumference.  Near the flywheel was a centrally-mounted dynamo which, in the 1920s, via a bank of electric storage accumulators, supplied the Mills and a few houses in the town with DC electricity. …………A large belt transferred the power directly from the flywheel to the saws in the Mills via a network of smaller belts and pulleys.  The ‘gas engine’ was started every morning by using compressed air.  Initially it laboured with a rather irregular ‘chuff’, chuff’ which then stabilised to its normal running signature with about a one second interval between the ‘chuffs’. ……….. A particularly big ‘chuff’ was heard one lunch time when the compressed air tank exploded as we sat eating and through the window we saw it soar many feet into the air. ”

Francis Grace gradually expanded a supply of electricity in the town. He met with many problems with its installation – not least from the Thornbury Parish Council. The Gazette of 4th December 1915 reports that Mr Grace asked the Council for permission to carry “electric wires” over part of the Council’s highway in Thornbury.  The Council’s response must have exasperated Francis.

Apparently “the clerk thought that the council had no authority over the application.  They could not give permission, neither could they refuse.  He suggested that the council say nothing.  This course was pursued.”

Despite this unhelpful attitude Francis must have persevered with installing cables.  Certainly electrical power was used by him when he built the Thornbury Picture House which was opened in 1919.

At some point in the late 1920s the Grace family formed the Thornbury Electric Company and Edmund Cullimore and his daughter Helen Garfield Grace were directors and Francis Grace was Secretary.  An indenture of 1934 shows that the head office of the company continued to be the Saw Mills.

Records in Gloucester Archives show that in 1929 Francis Grace applied for planning permission to build a substation in St Mary Street and another substation in Alveston.

By 1933 the Company claimed to have 303 consumers in its area and by 1935 this had increased to 347.  The work involved in this expansion was done by a surprisingly few people and unhindered by today’s regulations they turned their hands to every aspect of the job.  Bert Pridham’s role in this included installing cables, wiring up houses and collecting money from meters.  It was delightfully detailed in an article in the MEB Bulletin (the magazine of the Midlands Electricity Board).  We have an image of this which we can send to anyone with a particular interest.  Bert’s assistant in this was George Excell who was similarly energetic and versatile.

The installation of electricity seem to have created a demand for appliances as in 1932 the builders W.W. Pitcher and Sons applied for planning permission on behalf of the Thornbury Gas Light and Coke Company and Thornbury and District Electric Company to build the Gas and Electricity Showrooms in St John Street (seen here above left).  Click here to read about this building.

We have a copy of an indenture dated 29th of October 1934 that tells us that the company was contracted to supply electricity to Thornbury District Council “to light such streets and roads in the district of the council as the parish meetings may from time to time vote.” The lamps were only to be lit one hour after sunset to 10.30pm and we understand that this applied only to the winter time as light was considered unnecessary in the summer.  Forty-three lamps were to be lit in the winter of 1933-34.

On the 1st September 1939 two days before war broke out the blackout regulations meant that all streets lights were turned off.  No lights were to be visible at all, even the glow of a cigarette light was frowned upon.  In Thornbury many people were summonsed for a breech of these regulations.  Because Thornbury had only limited access to electricity the offences usually involved bicycle lights.  For example Irene Staite was caught riding a bicycle with an unauthorised light in 1942 and fined five shillings.

Car accidents throughout the country increased because of the lighting restrictions and the number of people killed on the roads almost doubled.  The King’s surgeon, Wilfed Trotter, apparently wrote an article for the British Medical Journal where he pointed out that by “frightening the nation into blackout regulations, the Luftwaffe was able to kill 600 British citizens a month without ever taking to the air, at a cost to itself of exactly nothing.”  We know of at least two such deaths in Thornbury.  In September 1940 Frederick Robert Wilcox was knocked down by a motorcycle whilst walking in St John Street.  A young child Sidney Coles was also believed to be a victim of an accident in the blackout.

In 1944 the regulations were relaxed and what was known as the “Dim Out” was enforced. In Thornbury it was decided to light the 86 street lights then in the parish and to increase them to 110.  The increase must have been very gradual as by 1950 there were still only 103 lamps. We know that the Thornbury Electricity Company continued to supply power until after World War II, although dissatisfaction with the service provided was quite evident.  A newspaper article of January 22nd 1944 expresses the feeling of Thornbury Parish Council that the lighting was inadequate, although it was admitted that the lights might make a difference on a very dark night, they were said to be rather dim, not all lit and very far apart.  The cost was also a problem.  We have another newspaper article dated February 1945 in which Thornbury Parish Council complains of the fact that Thornbury Electricity Company was charging rather more than the Bristol Corporation Electricity Department or the West Gloucestershire Power Company.  The Clerk of the Council had written to Francis Grace who was still secretary of the company on this subject. Mr Grace had replied that he was arranging a meeting with West Gloucestershire Power Company to consider new charges.

In 1947 the Western Daily Press reported that during the winter the wattage of street lamps was to be reduced by half with the exception of 10 lamps in the High Street.  The Electricity Act of 1947 the Midlands Electricity Board was formed as part of the nationalisation of the electricity industry and a new show room was built at the top of the High Street (at the house later known as 56 High Street).

By 1950 the Gazette was able to report a considerable improvement in the street lighting in Thornbury, bulbs were to be 100 watt rather than 60 watt, the number of street lights was increased from 103 to 110 – the period of lighting was to be extended by two months from 30th September to 1st April to September 1st to April 31st.  The cost of lighting the streets was increased from £337 to £444 per year.