The Gas Works in Thornbury

And some of the Managers who worked and lived there 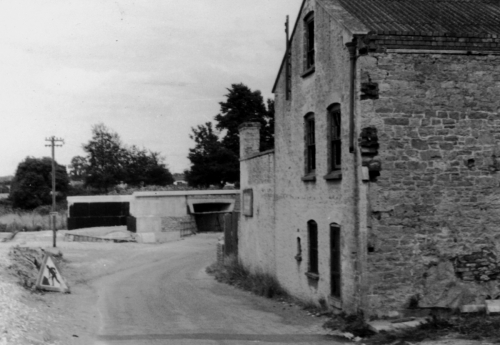 The site of the Gas Works now (as can be seen here on the left near the bottom of the page) is an unprepossessing car park on Park Road next to Streamside Walk.  We have very few images of the Gas Works and none taken when it was actually being used.  The photograph above shows Park Road, as we know it now, being built.  The bridge near Manorbrook School is in the photograph so it is likely that this was shortly before the gas works was demolished.  We also have a description of the gas works from a former resident, Jack Pridham.

“The gasworks was in a depression in a field right next to the road on the right hand side looking north.  It had two gasometers (one down and the other up) which could hardly be seen in the depression.  The gashouse itself was right on the road and of red brick.  There was a double gate leading to a yard where the coal was brought in and the heart of the operation, the ovens, were on the right of the yard.”

What is now Park Road was then called by the less attractive name of Gasworks Lane or Gashouse Lane.

In the 1861 census, George Harward aged 45 and from Salford in Worcestershire and his wife Mary aged 50 and from Winchcombe in Gloucestershire lived in the Gas House in what was at that time Back Church Lane and is now Park Road.  The account book of the Gas Company says that the family had moved to Thornbury by Feb 1857.  George must have been working here without his family at first as the accounts for June 1856 show that he has been paid wages.

In the census of 1841 George was living in Kidderminster with Mary and their children Ann and Thomas.  The 1851 census shows that George then aged 35 had been a gas manager living at Upton on Severn with his wife Mary and their son Thomas aged 12 before moving to Thornbury.  In 1857 and 1858 Harward continued to be paid a regular wage but after that he was no longer paid a set amount.

Instead he had a contract for the supply and manufacture of gas at “4s per m.”  In the contract there was a deduction for lamps which were not lighted.  On January 29th 1862 his contract was terminated.

We know some more of the occupants of the gas house after George Harward:

We believe that one of these may have been Alfred Kitt.  In the first quarter of 1862 the account books of Thornbury Gas Company show Alfred Kitt had taken over the contract to supply gas for the rest of the year.  His name also appears in connection with putting in new meters.  Alfred was born in Shoreditch about 1837 and his father James was also a gas engineer.  However we do not know how long he stayed in Thornbury because the 1871 census shows that he had returned to the London area and was lodging in Westminster.

The 1871 census shows that Alfred Head managed the gas works and lived in the Gas House with his wife, Martha and their three young children, Emma Alfred and Florence.  Young Alfred aged only five was born in Thornbury and baptised in October 1866, so it would appear likely that his father could have worked and lived at the Gas works for five or six years.  Their oldest child Emma was seven, and born, like her parents, in Weston super Mare.

The Heads had three children baptised in Thornbury; Florence in 1869 and Annie in 1871 as well as Alfred.  This implies that Alfred Kitt had left his post by 1868 or 1869 and that Alfred Head took over at about that time.

By the 1881 Census William Bryant and his family were living at the Gas House.  This was still their address in 1896 when the children of William Bryant started at the British School.  However this is unlikely to be the one that Jack Pridham remembers as in 1907 the records in Gloucester Record office show that a new house at the gas works was proposed for Back Church Lane by Thornbury Gaslight and Coke Co (see GRO DA 38/710/7).  William Bryant was listed in trade directories at this address until 1910.

William Bryant appears to be the son of Daniel Bryant a labourer and his wife Mary.  William was born in Tunbridge wells in Kent but the family moved to Middlesex.  The 1851 Census shows that they lived in Westminster.

William’s first wife was Jane Minton whom he married in 1869.   The 1871 Census shows that they lived in Willesden in Middlesex.  At the time of the Census Jane was 27 years old and William was 25.  He was already a gasman.  We believe Jane may have died in Wandsworth in 1876.

William Charles Bryant’s second wife was Alice Dillon, whom he married in the June quarter of 1877.  The 1881 census shows that she was from Bath and that they had a daughter Evelyn who was born in Kilburn Middlesex and who was presumably the child of his first marriage.  Alice died in Thornbury in 1886 aged only 32.

William Charles Bryant was a widower for the second time, although he was only aged 39, when he married Florence Rugman aged 27 from Thornbury.  Florence was the daughter of William Rugman.

The 1891 Census shows that the family were living at the Gas House.  William Bryant senior was then aged 43 was said to be from Tunbridge wells in Kent and his wife Harriet was from Thornbury.  Llynrosette was one year old and William Harold was three moths. Mary Ann Rugman aged 24 was living with the family. She was a general domestic servant. 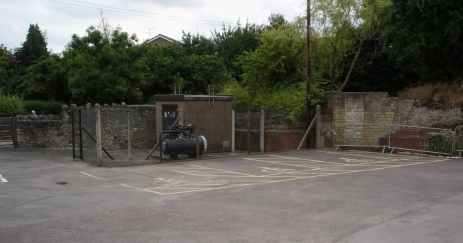 By 1901 the family had four children living with them at the Gas House.  William aged 10, Llynrosette aged 12, Jenet aged 8 and Gwendoline aged 5.  They also had Hariett’s father William Rugman living with them.  He was a widower aged 64.

Interestingly the application makes it clear that the gasworks was under orders of the government to produce and sell  to the distillers for the extraction of the toluene for high explosives.

William Charles Bryant died aged 77 and was buried in Thornbury Cemetery on 24th May 1924.  He was described as a ‘retired gasman’.  The Western Daily Press of Monday May 26th 1924 described the circumstances of his death, which were the subject of a coroner’s inquiry.  It referred to the fact that William  had been totally blind for four years before his death and that he died suddenly one morning whilst sitting in his chair.

In September 1922, when Phyllis May Buckingham was enrolled in St Mary’s School, her father Mr Charles Buckingham was manager at the Gas Works and they lived at Gas Works Cottage.  Phyllis’ school before this was in Berkeley which suggests that the family had moved from there.  The Electoral Roll of 1927 shows that Charles Buckingham and his wife Elsie were still living at the Gas House.  However they had left by 1931.

The special register compiled in 1939 in preparation for the war shows that George William Buckell was the working manager at the Gas Works.  He was born on 14th December 1906.  He was living in the house with his wife, Victoria Maud born on 17th February 1907 and their son, Kenneth G. born on 2nd May 1930.  Another person was listed as living there, but the details are blacked out.  George had married Victoria M. Merryweather in the Lymington area in 1926.  They are listed in the 1938 electoral register but had moved away by 1946.

We do not know at this stage when the Gas Works finally closed but the Thornbury Grammar School visited the Gas Works to see its workings as late as 1953.