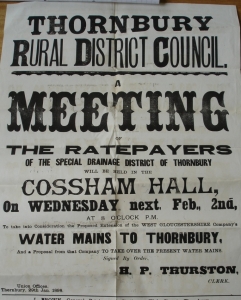 In an interview given to the Thornbury Oral History Society, George Excell recalled moving into a house on The Plain in the 1920s.

“It had no tap water, no proper sewerage, a man used to come round with a horse and cart and empty the bucket toilet, and gas was used for lighting and cooking.  Water was obtained from a hand pump from a tank under the scullery and drinking water was obtained in buckets from the mains water tap across the road which had replaced the old hand pump.”

Thornbury appeared to be having some difficulty in entering the Twentieth Century.

The story behind the introduction of piped water to the homes in Thornbury is a very long one indeed, although the first step, that of having water from the railway, has been described on another page.  Click here to read about railway water.

Water was always a matter for concern in nineteenth Century Thornbury, and probably for a very long time before that.  A newspaper report of 27th February 1858 seems to rejoice about even the possibility of an improvement;

“We are informed that a company is about being formed to introduce the blessing of pure water to this town, and that a spring and site for the works are all but if not quite chosen.”

So it would seem that there was not actually a company that would bring clean water to Thornbury and there was no definite source that could be used!

Not everyone seemed to be rejoicing at the prospect of clean water.  Nineteen years later, in February 1877 the Bristol Mercury reported that Frank Sturge a solicitor in Thornbury acting on behalf of the ratepayers was objecting to the fact that the Sanitary Authority was attempting to execute works to supply Thornbury with water taps and to contract with the Midland Railway Company to supply mains water to Thornbury.  This would cost more money and ” as the town was now supplied by four public pumps it was sufficient for the wants of the inhabitants and the expenditure was not warranted.”

In November 1883 the Rural District Sanitary Authority were advertising for bids from contractors for supplying 500 yards of water mains and fixing hydrants.  Obviously the authority was planning to provide a better supply than the existing one.

“The prospectus of the West Gloucestershire Water Company appears this morning.  The company obtained in 1884 a special Act of Parliament enabling them to utilise very large springs of water at Frampton Cotterell near Bristol and to supply a considerable district on the Eastern borders of Bristol, including the large and growing population in Kingswood, Hanham, Mangotsfield, Staple Hill, Bitton, Frenchay and neighbourhood.  There is undoubtedly a great need of a water supply in these districts ”

At this point Thornbury seems to be being left behind the rest of the area in the search for a good supply of clean water.  It seemed at first that Thornbury may have been content with railway water and cisterns.  However a newspaper article twelve years later makes it clear that money is at the heart of the issue.

The Bristol Mercury of 4th February 1898 reported on the meeting which was convened by the Thornbury Rural District Council to consider the proposed extension of the West Gloucestershire’s mains to Thornbury, which they had previously proposed TWO years earlier to bring water and supply the present hydrants.  The District Council was at that time “not satisfied with the company’s terms” and so the idea had fallen into abeyance.  The new proposal was to extend the water mains into Thornbury and Alveston, whether the Council took the public supply or not.  If the Council did take it, the Company offered to pay £150 for the present water mains.

After some discussion the Company modified its terms and agreed to continue the existing supply on condition that the Council hand over the water mains and paid the West Gloucestershire Water Company the same sum as they paid Midland Railway.  The Clerk to the Council, Mr Thurston, seemed inclined to drive an even better bargain because he said that he had spoken to the Company and mentioned that the Council would want the company to supply fire plugs.  He was told that there would be sufficient water “to send a flow over the Church Tower“.

The minute book records that the meeting, which was held in the Cossham Hall on February 2nd 1898, resolved

“That in the opinion of this meeting it is desirable that the District Council contract with the West Gloucestershire Water Company for an unlimited supply of water to the present standpipes in the Town of Thornbury for a term of 21 years providing such a supply can be obtained at a sum not exceeding , £30 per annum and that the present mains be leased to the Company for that period at a nominal rent and to keep the mains and standpipes in repair.”

It is interesting to note the changes in the agreed amount.  Never bargain with a true Thornburian!

It does seem that there were vested interests in opposing the water.  Mr Cullimore had very strong feelings about monopolies and did not want a monopoly like the West Gloucestershire Water Company to take over the town.  This is interesting from a man who owned so many other monopolies in the town.  Mr Cullimore also said that the people of Thornbury were not concerned about fire as their property was insured so it did not matter if it burned down.  It is to be hoped that Mr Cullimore took his own advice as his sawmill burned down in October the following year.   Click on the article on the right to get a larger version of the article reporting this discussion.

On July 16th 1898 Mr J. C James was elected as a member of a committee to arrange terms with the West Gloucestershire Water Company for a supply of water to Thornbury.

The work to install the new mains was not done overnight.  The supply to the town seemed to get perilously low.  There is a newspaper cutting in Gloucester Records Office dated 15th October 1898 which reported that

“the West Gloucestershire Company had offered to supply the Council’s mains and keep the hydrants in repair till Christmas for the sum of £5.00.  The present supply of water was very short………and that the clerk (should ) be empowered to order fire hydrants not exceeding the number of six in addition to the six which the Company agreed to provide”.
On November 26th 1898, the Bristol Mercury stated that the surveyor Mr F Williams had reported to the Thornbury Guardians meeting that “the West Gloucestershire Water Company had commenced to lay the water to the workhouse entrance and asked the Board for instructions for getting the mains brought up the private road to the buildings”.

The new water came at a cost.  The Bristol Mercury of March 11th 1899 reported that drinking water could be supplied to the Board Schools by West Gloucester Water Company for £3 per annum.

This does not seem a vast amount by modern standards but the School Board felt it was too expensive “as several houses in Thornbury were supplied at 30s per annum that would use more water than the schoolchildren.”

The Gazette of July 29th 1916 shed light on some of the problems that had continued to plague the people of Thornbury for decades. I n the article Mr Symes was complaining that “this week, on several days no water was obtainable at the public hydrants or by the inhabitants who had it laid on, after mid-day.” Mr Thurston, the clerk to the Council, said that he had seen Mr Andrews the Secretary of West Gloucestershire Water Supply and the reply had been “there was so much extra water being used at Filton that the smallness of the main prevented it on several occasions from reaching Thornbury”.

This same article also refers to an interesting point.   The original agreement for the West Gloucestershire Water Company to use the mains of Thornbury Council in 1898 “till Christmas” was still in operation in 1916.  It was going to remain the situation for some time – because the article said in September 1898

“it was agreed to let the Company have the use of the Council’s mains for a nominal yearly rent providing the company provided a supply of pure and wholesome water to the public hydrants for domestic use and for washing carts for the sum of £30 per annum for THIRTY YEARS“.

The Company had also agreed that the water should not be cut off without 24 hours notice so when the bill came in the Council would not pay it!

It seems as though this long effort to get a reliable supply of clean water water was nowhere near its end.  It remained a contentious issue in the town for many years to come.  On 6th May 1944 at the Rural District Council the clerk said that Gloucester Corporation had agreed to supply water in the Thornbury Rural District “provided that such parishes can be brought within the Corporation’s limits of supply.”

Gloucester Corporation’s Town Clerk was asked to write to the Minister of Health asking how the powers could be transferred from West Gloucestershire Water Company to the Gloucester Corporation. “Negotiations seemed to be going on week after week. The need in this area had got very acute. Water was needed not only for the population but for the farming industry as well. Many cattle had to drink out of stagnant ponds.”

We have no evidence that Gloucester ever supplied water to Thornbury.

Despite the evident discontent, the West Gloucestershire Water Company supplied Thornbury with water until the Company held a meeting on March 28th 1959 and agreed to be amalgamated with Bristol Waterworks Company.

Although the water companies were supplying water, in places the old ways prevailed.  Some parts of Thornbury continued to have “railway water” up to living memory and the catalogue for the sale of Edmund Cullimore’s estate dated 1958 described the cottages in Sawmill Lane and specifically said that the “water (is) from the railway station“.  Other parts of Thornbury never had piped water inside the house.  Houses that were demolished in the redevelopment of the 1960s and 70s included some houses that only ever had a cold tap in the yard or scullery and never had flushing toilets.  They also lacked gas and electricity supplies.