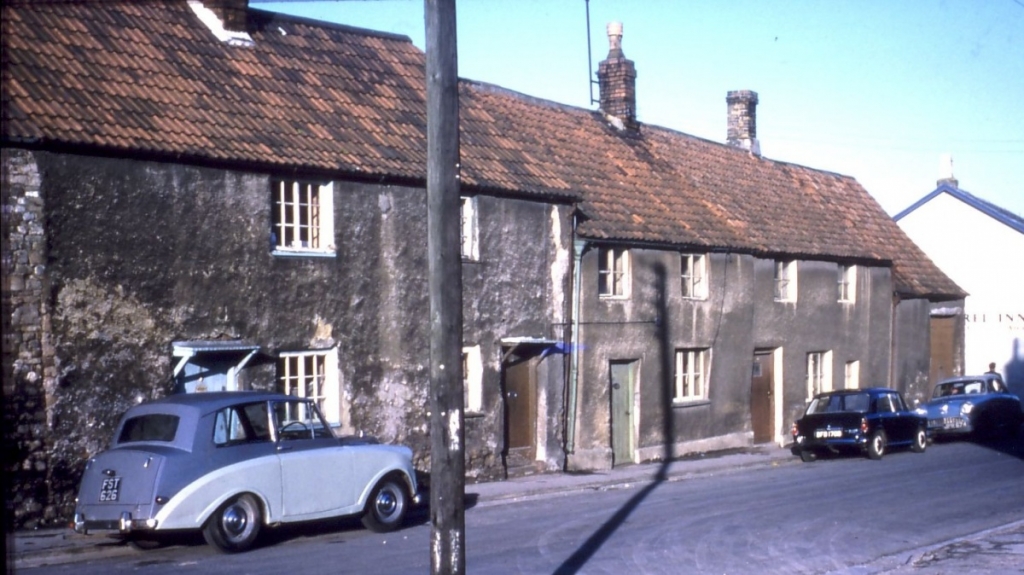 The photo above was taken in the late 1960’s just before the row of cottages was pulled down.  There were four cottages just up the street from the Barrell which can be seen on the far right in the photo.  There were two groups of two cottages, the lower two cottages and the adjoining coach-house were owned by the Corporation of Thornbury and from the 1890’s by the Thornbury Town Trust, the other two cottages were privately owned.

The two houses on the left in the above photo were privately owned.  When house numbering was introduced in the 1950’s, they became 12 and 14 St Mary Street.  Number 14 was the one of the left in the photo above, with the blue door and the blue car parked outside.  Number 12 was the house next door with the brown door.

William Taylor – according to his last will and testament dated 16th September 1798 William had built the two houses.  William was the owner of the property on the High Street (later known as 43 High Street) and the houses were built at the bottom of his orchard facing St Mary Street.  The houses had been occupied by John Cossham and John Tilly, but at the time of the will in 1798 they were let to John Tilly and a person called Seager?  We assume that John Cossham was John Goodenough Cossham who died in 1776, or possibly his son born in 1771.  We are unable to identify the person called Seager.

In the will he left 43 High Street and 12 and 14 St Mary Street to his son, James Taylor who let all three houses out to tenants.  In his will dated 1808 James left the three houses to trustees with instructions to sell the properties and share the profits between his sisters, Hester the wife of Edward Munday, Mary the wife of John Alpass and Betty (alias Elizabeth) the wife of Richard Putley.  At that time George Isles and James Saunders were occupying the two houses in St Mary Street.  Click here to read about William and James Taylor

We are not sure what happened to the properties until 1840.  In the 1840 Tithe Survey the two houses were in Plot 164, two houses and garden owned by James Martin Baxter.  According to the trade directories of 1835 and 1842 James Martin Baxter was an attorney and he lived at Alveston.  He owned other property in Thornbury including the old Cock Inn in the High Street and the houses in Rock Street which eventually became numbered 11 – 19.

We haven’t seen a complete set of deeds for the houses so we don’t know when James Martin Baxter sold them and to whom.  The next owner we know of is Richard Ellis.

Richard Ellis – we are not sure when or how Richard acquired these properties.  An indenture dated 3rd May 1845 shows Richard bought the property previously owned by Thomas Mowatt for £500.  This included the house and shop at 43 High Street, but may have included other properties.  Richard traded in the shop on the High Street as a chemist and druggist, but he is also listed in the trade directories as a grocer, tea dealer, stationer, book-binder and stamp distributor.

His last will and testament dated 30th January 1873 shows that Richard owned the house and shop in which they lived at 43 High Street, a house in Soapers Lane and the two houses in the Back Street (12 and 14 St Mary Street).  The documents associated with the will are a bit confusing.  It appears that after allowing his wife, Jane, to use the properties during her lifetime, he left his business and property on the High Street and the cottage in Soapers Lane to his son, Charles Edward, and the two houses in the Back Street to his son, Walter.

Various transactions took place during 1874 and 1879 which seem to result in Walter gaining ownership of the various properties, although we are not sure about the exact details.  Jane Ellis is shown as the owner of the property in the Rate Books up to and including 1890.  We know that the two houses were put up for sale on 26th October 1892 along with Richard Ellis’s shop and dwelling house on the High Street.  Click here to read about the Ellis family

‘Messrs Ogborn’ – when the houses were put up for sale at auction on 26th October 1892 they were bought by Mr Ogborn for £109.  The actual conveyance mentions it was William, Joseph and Matilda Ogborn who bought the property on 22nd December 1892.  The 1894 and 1899 rate books show that ‘Messrs Ogborn’ had taken over ownership of the two houses.  This must refer to the members of the Ogborn family running the butchering business in the High Street.  The 1891 census shows that William, Matilda and Joseph were involved with the business.  They were children of John and Eliza Ogborn who had been running the business in the 1881 census.  William died on 31st March 1900 and on 4th September 1900 Joseph and Matilda Ogborn sold the two properties to Thomas Excell for £96.

Thomas Exell – the 1905, 1910 and 1926 Rate Books show that Thomas Exell was the owner.  Thomas was the son of George Henry Exell and his wife, Eliza.  He married Maria Vickerstaff in London in 1883, but settled in Thornbury where Thomas ran a grocer and corn dealer shop in the High Street and he acquired several other properties in the Town, including 10 Upper Bath Road.  Click here to read more about Thomas Exell

He died on 14th January 1930.  In his Will his estate was left to his two daughters, Lilian Mary, the wife of Reginald David Edwards, a brewer’s surveyor living in Mangotsfield and Bertha Annie, the wife of Wilfred Percy Winter, a bank clerk living in Tyndalls Park, Bristol.  An auction of Thomas’s property was held in 1930 and the two houses in St Mary Street were included.  They were described as ‘Two four bedroomed cottages occupied by Mr M. J. Poulton and Mrs Clarke at rentals of 2s 6d and 3s 6d per week respectively’.

The houses were not sold at the auction and they continued to be owned by Exell’s daughters, or at least Bertha Annie until 22nd February 1960.  Then Bertha Annie Winter (then living at Overdale, Tytherleigh near Axminster) sold them to Leslie James Hawkins for £350.  He owned them until they were acquired by Thornbury Rural District Council under a compulsory purchase order in 1969.  The houses had already demolished when the land was finally conveyed to the Council on 29th October 1971 for £1900.  The land was used to provide an access road for vehicles to the service area at the rear of the Barrel, the Town Hall and shops.