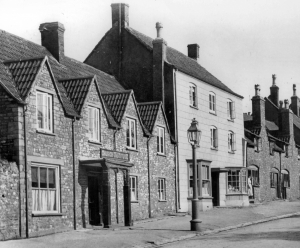 This house is the distinctive 3-story building in the centre of the photograph.

We are grateful to South Gloucestershire Council who allowed us to copy the deeds of this properties.  These documents, together with ones relating to 11 St Mary Street copied at Gloucester Archives, enabled us to learn a lot about the early history of the house.

This webpage summaries the main changes affecting the property:

The earliest record which we can definitely link to the property is a document relating to 11 St Mary Street dated 8th May 1679.  This describes the property on the south side as ‘lands and messuage of Joane Patch late deceased and now of Mary Penduck’.

‘all that messuage or tenement situate and being in Thornbury in a street there called St Marys Street als the Back Street wherein the said Mary Penduck and one Elizabeth Search widow now inhabit and adjoining to a messuage of one Edmond Hughes on the northward side thereof and to a house belonging to the poor of Thornbury now in the occupation of on William Russell on the southward side thereof and one other dwelling house called the Backhouse to the first mentioned messuage adjoining wherein one John Smith now inhabiteth with the garden orchard backside and outlet to the said messuage and dwelling house hereby conveyed adjoining and belonging and extending from the said messuage forwards to the one backstreet there leading from Collins Street Lane towards a place there called Gillingstool backwards‘.

Another document dated 1737 refers to the property as:

‘And also of all that formerly messuage or tenement now run into decay and converted to a garden situate and being in Thornbury in a street there called St Mary Street otherwise the Back Street wherein one William Hobbs formerly dwelt and adjoining to a messuage late of one Edmund Hughes and afterwards of one Edward Hill since that of one ….. Hill his son and now of William West on the northwards side thereof and to an house belonging to the poor of Thornbury on the southward part thereof and one dwelling house called the Backhouse to the said first above mentioned messuage adjoining wherein one John Smith formerly dwelt with the garden orchard backside and outlet to the said messuage or tenement and dwelling house adjoining and belonging and extending from the said messuage towards the Back Street there leading from Collins Street Lane towards a place there called Gillingstool backwards‘.

So, by 1737 the main house had been replaced by a garden.  We are not sure if “The Backhouse” was still standing as there is no mention of an occupant, or whether it had also been demolished.  Certainly by 1776 there was an habitable building on the site occupied by a butcher, Joseph Walker, but even this building was taken down at some time after 1780 when Thomas Hendy, a butcher bought the property and re-developed it.  We assume the new house he had built was the one shown in the photo above.  Thomas also built another house at the bottom of the attached orchard, on the land fronting St John Street.

When the property was put up for auction on 27th January 1883, it was described then as:

‘A large and convenient house and garden situated on the east side of St Mary Street in the town of Thornbury containing two front rooms, a passage, kitchen, back kitchen, two pantries, underground cellar, five bedrooms and two attics. There is a large rainwater tank on the premises which are well adapted for a laundry business or other business requiring space.  This lot adjoins the Castle Coffee Tavern and property of the corporation of Thornbury and is in the occupation of George Mills and Mrs Sims as weekly tenants at an aggregate rent of 6s 6d a week‘.

On 8th September 1942 the property was put up for auction by the Clutterbucks.  It was described as:

‘a dwelling house with garden occupied by the owner, Mrs Clutterbuck.  The house which is double-fronted is stone-built and comprises three stories with underground cellar, and provides the following accommodation: Ground floor – two front sitting rooms with bay windows and cupboards, kitchen with range, dresser cupboard and sink, and scullery, outside W. C. and wash-house. First floor – three bedrooms and storerooms. Second floor – landing and three attic bedrooms. Company’s water, gas and electricity and main drainage. At the rear is a good garden well stocked with choice apple trees. There are two pigstyes, fowl house and large timber-built shed with cement floor‘.

Roman Catholic Church – on 1st October 1942 Mary Clutterbuck sold the property to the Roman Catholic Church for £925.  They converted one of the front rooms into a small chapel which they used for daily services and the rest of the house was used to provide accommodation for members of the church.  On Sundays when they had a larger congregation they held the service in the Church Institute next door.  This arrangement continued until 1952 when a new larger chapel was built onto the back of the house.  As the congregation grew over the years even this new chapel proved too small and sometimes some of the congregation had to stand in the garden.  Eventually the Church was able to buy Porch House in Castle Street and to build a new church in the garden there.  This opened in 1964.  Click here to read  more and see a photo of the inside of the old church

On 18th November 1964 the Salvatorian Trustees sold The Presbytery to Thornbury Rural District Council for £2500.  The building was demolished and the site re-developed as part of the St Marys Shopping Centre.  The thumbnails below shows the site in the process of the demolition.  Click on each thumbnail to see the full picture.

A new shop was built to replace the old building.  It was originally used as Lennards shoe shop but since that time it has a number of tenants including Mark Two selling second-hand clothes, Cotswold Pine selling furniture and Julian Graves selling dried fruit and nuts etc.