We don’t know when the house was built.  It was there at the time of the 1840 Tithe Survey when it was Plot 196 owned and occupied by Joseph Laver.

We don’t think Joseph was actually living in this house – his home in the 1841 census appears to be on the High Street.  Joseph was banker associated with the Thornbury Banking Company. He owned quite a bit of property in Thornbury at that time.  He died on October 12th 1857 aged 84.

It is very difficult to identify the house in the early census records.

The Lovegroves – in the 1841 census we think that the house is occupied Samuel Witchell Lovegrove who was Joseph Laver’s son-in-law.  The census shows Samuel was a wine and spirit merchant aged 30 living with his wife, Sophia aged 30 and their children, Frederick aged 5, William aged 3 and Louisa aged 2.  They had a 14 year old servant girl called Ellen Pritchard to help with the growing family.

In the 1850’s Sophia wrote a poem about the coming of gas to Thornbury.  By 1861 the family had moved again.  This time they were living in Paddington and Samuel had become a railway clerk.  Louisa aged 20 was a dressmaker and 22 year old William was a clerk.  By 1871 there was yet another change.  Sophia Lovegrove was a housekeeper in an asylum for gentlemen in Brislington in Bristol.  Samuel Witchell Lovegrove died in Bristol in the December quarter of 1876 aged 69.  In 1885 the rate book shows that Sophia Lovegrove was living at 61 High Street in Thornbury.  In the 1891 census Sophia then a widow aged 81 was living in the public house in Swindon that her son William (now aged 52) and his 50 year old wife Martha managed.  In the 1899 rate book she was living in Fern Cottage at 20 Castle Street.  Sophia died in Kensington in the December quarter of 1920 aged 89.

Thomas Morgan – in 1851 we think the house might have been occupied by Thomas Morgan a plasterer and painter aged 58 from Berkeley, his wife, Sarah aged 66 from Stinchcombe and their unmarried daughter Charlotte aged 22 born in Thornbury and grandson, Edwin M Tanner aged 6 born in London.  Thomas Morgan and his daughters owned property in Thornbury for many years.  Click here to read more

George and Samuel Hughes – the 1861 census shows George occupying the house with his family.  George was a blacksmith.  By 1871 the family had moved to 8 St John Street.  The 1871 census and the 1876 rate book show that George’s father, Samuel Hughes, was occupying the house at 2 St Mary Street.  Samuel was also a blacksmith.  Click here to read more

Gilbert Symes – the 1880 rate book and the 1881 census show Gilbert and Eliza Symes were living in the house at 2 St Mary Street.  They were living with their two children: William George born in 1879 and Edith Annie born in 1881.  Gilbert was a blacksmith.  In 1891 the family was still living at 2 St Mary Street.  They now had three other children in addition to William and Edith: Amy Ethel born in 1883, Maurice Gilbert born in 1886 and Randolph Hector born in 1888.  The 1894 rate book shows that Gilbert is also renting the ‘Malthouse’ adjoining the house where he was living.  By 1899, Gilbert had moved his business to The Plain, next to The Royal George.  Click here to read more

The house was empty in 1905 and again in 1910 when the information for the rate books was compiled.

William Henry Luker – the 1911 census shows that the house was occupied by William Henry Luker, a baker aged 57 from Cheltenham.  In 1905 and 1910 rate books he is shown as living at 5 St John Street.  In 1911 he was living at 2 St Mary Street with his wife, Jane aged 33 born in Caudle Green, Gloucestershire and their two children:

‘J. Harris’ – the 1925 Valuation List and 1926 rate book show the name of ‘J. Harris’ as the occupant of the house.  We are not sure but we suspect that this would be James Alfred Harris (who was known by the names of James or Alfred at various stages of his life).  Alfred James and his wife, Mary Elizabeth, were listed as living in St Mary Street in the 1927 electoral register.  Click here to read more 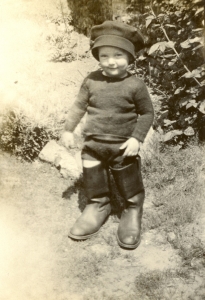 Albert James and Marjorie Pridham – Albert and Marjorie lived here following their marriage in 1927 and their son, John Brian (known as Jack) was born here in 1929.  Albert was an electrician and worked closely with Francis Grace to provide Thornbury with an electricity service.  He was also a volunteer fireman and he was ideally located in this house which was next door to the Fire Station which at that time was located in the Old Malthouse next door.  There was even an entrance to the Fire Station from Albert’s back yard.  The photo on the right shows Albert’s son, Jack, dressed as a fireman.  In 1933, the family moved to house on the junction of The Plain, St John Street and Gloucester Road which has become known as The Georgian House.  Click here to read about the Pridham family

We are very grateful to Jack Pridham for letting us see a book he had written about his memories of Thornbury and this includes a few colourful thoughts about the house at 2 St Mary Street.  Click here to read what Jack wrote

Albert and Ruby continued to live here for a long time with their son, Jeffrey, and their nephew Jack White.

In the late 1940s Albert and Ruby Screen took in some of the family of George Frederick Albert Williams.  George had married Ruby’s daughter, Phyllis in the Birmingham area in 1935 and they appear to have moved to Thornbury where their children were born, Barbara in 1936, Maureen in 1937, Terence in 1939, Georgina in 1941, Wendy in 1943 and George in 1947.  We understand that the Williams moved to live at 2 St Mary Street as they were shown as living in ‘St Mary Street’ when their daughter Barbara was baptised on 2nd February 1936.  The baptism record shows George was working as a gardener.  The family then moved away and lived in Berkeley, Falfield and then Stroud Road, Patchway.  Phyllis died in Bristol Royal Infirmary aged 31 and she was buried in Thornbury Cemetery on 6th March 1948.  We understand that George and four of his children (Barbara, Maureen, Terence and George) moved in with Albert and Ruby at 2 St Mary Street and the rest of the children (Georgina and Wendy) went to live with George’s parents in Oldbury. 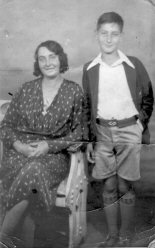 Albert died in Bristol Royal Infirmary aged 60.  He was buried in Thornbury Cemetery on 16th February 1952.  The burial record describes Albert as a fitter.  Ruby carried on living there.  The photo on the left shows Ruby and Jeff Screen.

The 1954 electoral register shows George was then living at 1 Eastland Avenue.  In 1956 at the time of the marriage of George’s daughter, Barbara Lois Olive, to Reginald Thomas Lansdown who came from Tockington she was still living at 2 St Mary Street.  The marriage record shows that George was a railway worker and that Barbara was an invoice clerk.

We have an indenture dated 1961 which shows that 2 St Mary Street was part of the estate of Henry Williams Williams who had died in 1960.  It refers to the property as being a cottage which has been demolished and the site was then now occupied by Thornbury Motors Limited.  As the photo on the left above shows taken in 1964 they used as a off-street car park.

In more recent times it was used as a car park for the business run by Green and Burton in the adjoining Malt House but is now void.