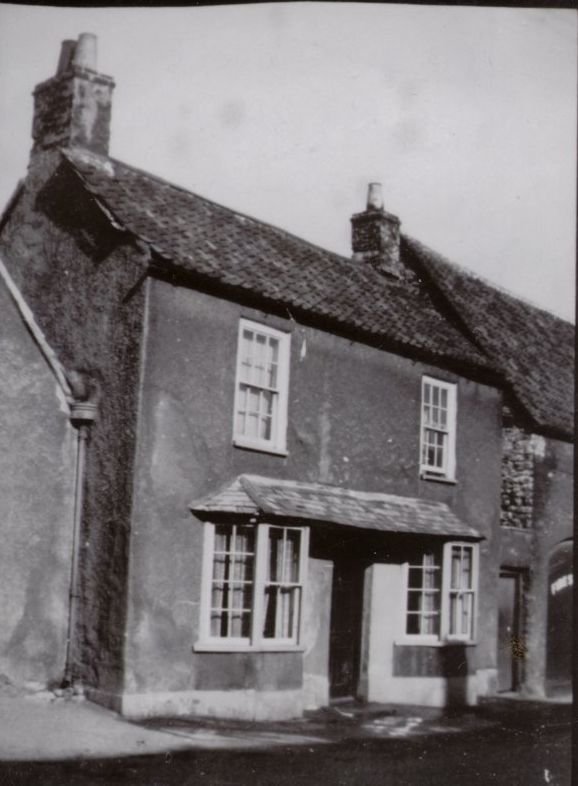 This house was located opposite the Plough on St Mary Street.  The house had already been demolished by 1960 and the ground has never been developed although occasionally used as a car park.  The photo on the left below shows what the site looked like in 2012.

We don’t know when the house was built.

An indenture dated 20th December 1837 shows that ownership of the property was then being transferred from William Grove, a cheese factor of Thornbury to John Lamb, late a manager of the National Provincial Bank in Bristol and John Grove of Elberton, wool stapler who were appointed as trustees in respect of this and other properties owned by William Grove under separate mortgages.  This property was mortgaged to John Thurston and Edmund Lloyd.  John Lamb and John Grove were to sell all the properties either by auction or private arrangement and repay the mortgages and deduct their expenses, which in this case included investigating the ownership of the property.  Any remainder was to be paid to William Grove.

At this time the property was described as ‘a messuage or dwelling house, brew house and blacksmith’s shop now in the occupation of William Knapp blacksmith, bounded on the east by the Back Street, or the west by a garden belonging to Joseph Laver, on the north to a malthouse and on the south by a stable respectively belonging to William Greenwood’.

We know that William Knapp moved in 1839 to the Georgian House on the junction of The Plain, Gloucester Road and St John Street.

At the time of the 1840 Tithe Survey, this property was described as Plot 196 owned and occupied by Joseph Laver.  Joseph was banker associated with the Thornbury Banking Company.  He owned quite a bit of property in Thornbury at that time.  He died on October 12th 1857 aged 84.

Hannah Jenkins – the next reference we have of an owner of the property is the 1876 rate book which shows it was owned by Hannah Jenkins.  She was still the owner in 1885.  We know from the 1871 census that Hannah was living near Hackett Farm.  She was a widow aged 69 born in Sibland, living with her grandson, John Ford who was a farmer and maltster aged 19 and his sister, Hannah Ford aged 12, both born in Rockhampton.  By 1876, John had taken over the use of the Malthouse next door which was also owned by Hannah Jenkins.  Hannah died in The Hackett aged 84 years and was buried on 15th February 1886.

Ann Ford – the 1887, 1890 and 1894 rate books show that owner as Ann Ford.  Ann was also shown as the owner of the Malthouse next door.  Ann died at Crossways House aged 75 and she was buried on 1st May 1897.  In her last will dated 13th January 1892 she put her property into trust for the benefit of her nephews and nieces.  She didn’t list all her property, except for the Black Horse, her freehold beerhouse and garden in Gillingstool then occupied by John Harvey.  Following her death, her property was put up for sale at auction on 7th July 1897.  There were three lots, a shop on the High Street occupied by Charles Symes, the house and shop which later became 2 St Mary Street and the adjoining Malthouse.  Lot 2 was described as ‘a freehold dwelling house and shop with yard and smithy in St Mary Street in the occupation of Mr Gilbert Symes at the yearly rent of £15.  The house contains shop, sitting room, kitchen, back kitchen and 3 bedrooms.  The outbuildings contain smithy and stable’.

John Hodges Williams – the 1899 rate book shows that John H. Williams had taken over as owner.  John Hodges Williams was a very successful businessman in Thornbury running various shops and owning a considerable number of other properties and land in the Thornbury area.  This property continued to owned by the Williams 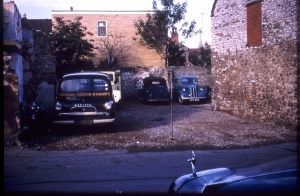 family, and following John Hodges’s death in 1934, it was inherited by his son, Henry William Williams.  Henry continued to own the property.  We have a copy of an indenture dated 1961 which shows that 2 St Mary Street was part of the estate of Henry Williams Williams who had died in 1960.  It refers to the property as being a cottage which has been demolished and the site was then now occupied by Thornbury Motors Limited.

As the photo on the left above shows taken in 1964 they used as a off-street car park.

In more recent times it was used as a car park for the business run by Green and Burton in the adjoining Malt House. When they moved to the Trading Estate, the site has been ‘awaiting re-development’ and blocked off to prevent access.