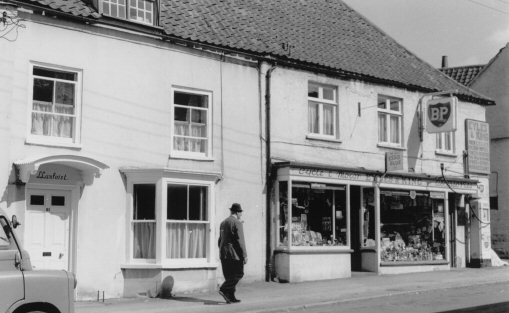 This photo was taken about 1969.  Number 21 St Mary Street is the house on the left – note it was then called ‘Llanfoist’.  Number 23 was the ‘Eyles and King Cycle Shop’ on the right.

We are grateful to Liz Blaker, a member of the King family who owned and occupied 21 and 23 St Mary Street during the 1900’s.  She allowed us to copy a wonderful set of indentures and other documents which show that these, and other properties including 19 St Mary Street, were built on a single burgage plot bordered by St Mary Street, Horseshoe Lane, St John Street and the house later known as number 17 St Mary Street.  Click here to read about the early history of the whole plot

Although we haven’t seen a document confirming this, we suspect that at some time in the late 1700’s part of this plot of land was separated from the main area.  We have copies of three later indentures that show us that 21 and 23 St Mary Street and some buildings at the rear of these two houses, were owned and developed as a separate area.  Thus we know that 21 and 23 St Mary Street were built by Daniel Burchell at some time around 1819 on the site of an old house and shed which had previously been owned by Thomas Sparks who sold it to John Tayler who passed it to his daughter, Ann Tayler.  Click here to read about the early history of 21 and 23 St Mary Street

Ann Tayler lived in her own house until some time between 1814 and 1819 when Daniel Burchell pulled down an old building on the site and built a new house and blacksmith’s shop.  In 1819 Daniel then purchased the new properties from Ann and the land tax records show that Daniel Burchell lived in number 23 until he moved about 1824 to number 19 St Mary Street which he had bought from Ann Caddy, Robert Caddy’s widow.  Daniel then rented out number 23.

At the time of the 1840 Tithe Survey the two houses were on Plot 221 owned by Daniel Burchell (who lived at number 19) and occupied by Maria Cam and William Clark.  When Daniel died in 1866 the properties were left to his wife, Hester, during her lifetime.  They were then purchased from Daniel’s estate by his son, Frederick, and continued in the ownership of the Burchell family up to the death of Frederick Burchell on 5th September 1905.

The 1926 Rate Book confirms that both properties had been acquired by William Eyles.  For most of the period until they were acquired for re-development in the late 1960’s they were used by the families connected to the business of ‘Eyles and King’.  On 14th June 1945 21 St Mary Street was sold by William Eyles to his daughter, Hilda, the wife of Charles King for £400.  On 23rd September 1963, number 21 was sold by Hilda to her son, Norman Colin King for £3,800.  On 25th September 1963 Minnie gifted number 23 to Hilda King.

On the photograph at the top of the page 21 St Mary Street is clearly shown as being given the name of ‘Llanfoist’.  The name first appears in 1950 electoral register when it was the home of Norman King.  Wikipedia tells us that it is name of a village in Monmouthshire near Abergavenny, but we don’t know what connection the King family had with that part of the world.

Hilda King sold 23 St Mary Street to Thornbury Rural District Council for £8000 on 4th April 1973.  At the time Hilda was living at Big Oak Station Approach, Minety, Malmesbury.  On 23rd March 1978 Norman King sold 21 St Mary Street to the Council for £17,000.  In the re-development of the Town Centre, both buildings were saved and opened as shops.

We have two thumbnail photos below – the one on the left taken in the 1970’s showing the properties in a sorry state and even the petrol pump has been removed.  The one on the right shows the new shops taken in 2009.   Click on the thumbnails to see the full image.