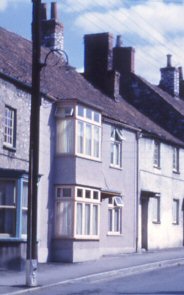 Number 27 is the house shown in the centre of the photograph on the left.  This photo was taken in the early 1960’s.  Click on the thumbnail on the right below to see the view of the top end of the street.

We are grateful to South Gloucestershire Council for allowing us to view the deeds of this property.  Early records from the 1780’s show that the property was then owned by Richard Williams.  He was a tiler and plasterer who appeared to own a large part of this area according to his will dated 1785.  On Richard’s death his property was put in trust for the use of his wife, Mary.  An abstract of title shows that the property passed from Richard William to Henry Wilkes on 24th and 25th April 1826.  On Henry’s death the property was passed to his wife, Mary.

The 1840 Tithe Survey shows that it was Plot 135 owned by Mary Wilkes and occupied by Martha Winstone.  When Mary died in 1849, the property was subsequently passed to her daughter, Ann Ann, the wife of Thomas Ann and on to their daughter, Mary Ann Ann.   Click here to read about the Wilkes and Ann families

Annie Lawrence – an agreement was made on 22nd June 1920 between George Mansell Williams and Annie Lawrence.  Annie was a widow living at Oaklands, Newnham on Severn.  At the time of the purchase, Annie was given the option to buy a strip of land including a coach-house at the rear of her property which belonged to George Mansell and his wife, Sarah following their deaths for £10.  George died in 1922 and Sarah in 1936.  By 1936, Annie was living at St John’s Vicarage, 12 Fitzroy Square, London and she took up the option of buying this land for £10 on 28th April 1936.  The next day, on the 29th April 1936, she sold all the property including the coachhouse on Rock Street for £150 to Cyril Mark Williams.

The house at 27 St Mary Street was acquired by the Council for the town centre re-development on 8th May 1969.  They paid £850.  It was demolished to make a pedestrian access to the library and behind the shops now forming 25 and 25A St Mary Street.

We have been told a few little stories about Cyril which show he was head of his time, at least with regard to re-cycling.  He had a reputation for not letting anything go to waste and for using features being replaced on one building on a different building on which he was involved.  It was interesting to see that the agreement he had with the Council over the sale of 27 St Mary Street reserved his right to have ‘the oak front door and the heart shaped stone erected over it’.  We would be interested in hearing where these features ended up!  Click here to read more about Cyril