Click here for the history of the property which was originally a single property but by 1885 had been divided into two properties, later known as 43 and 45 St Mary Street

On 25th March 1805 when Benjamin Leach jnr sold the property to Thomas Winstone, cordwainer, Thomas Moxham and William Herbert living in the house.

Martha Cullimore – Martha was living in the property on 14th March 1836 (when the house was sold to Daniel Pitcher).  The 1841 Census shows Martha still living in St Mary Street.  She was a laundress aged 50.  She seems to have a young lad, Edwin Ashwell aged eight, and three lodgers, Charles Eliott, a Scottish journeyman nailor aged 18, Charles Gibbs, a journeyman shoemaker aged 22 and Joseph Amos, a journeyman cooper aged 22.  By the time of the 1861 census she was lodging with Ephraim Wilson at 1 Bath Road.  She was described as an unmarried laundress aged 60 born in Thornbury.

Jacob White Withers – at the time of the 1840 Tithe Survey Plot 141 is shown as a house and garden owned by Daniel Pitcher and occupied by Jacob Withers.  Jacob was born on 12th September 1800, the son of William and Elizabeth Withers.  The IGI shows Jacob married Mary Bevan in Bristol on 17th December 1820.  The records also show that Jacob was a shoemaker and a shopman.  Their children include: Harriett Bevan baptised on 23rd September 1821, George Bevan baptised on 13th July 1823, Matilda baptised on 3rd April 1825, Edwin Bevan and William James both baptised on 15th March 1829, Louisa baptised on 3rd July 1831, Henry baptised on 29th June 1834 and Charles born about 1836.

We know from the land tax records that in 1831 and 1832 Jacob was living in a property owned by Thomas Morgan.  We don’t know where this property was.  We know that Jacob was occupying the property in St Mary Street at the time of the 1840 Tithe Survey.  In the 1841 census Jacob was living in Lower Clydoch, Llanelly in Wales.  He was working as a shoemaker living with Mary aged 45, Harriett aged 20, ‘Lewiza’ aged 6, Henry aged 7 and Charles aged 5.  By 1850, Mary had died and Jacob married in Bristol on 12th September 1850.  His second wife was Celia Gough who came from Alveston, the daughter of James Gough.  In the 1851 census Jacob and Celia were living in Olveston with three of Jacob’s sons, Edwin, Henry and Charles who had all become cordwainers like their father.  Celia died in 1858.  The 1861 census shows Jacob still living in Olveston with daughter, Lucy aged 9 and son, William aged 7.  In 1867 Jacob married again – his third wife was Hannah Milliner.  The 1871 census shows Jacob and Hannah in Haw Lane, Tockington.  He is now a bootmaker.  Hannah is aged 53 from Chipping Sodbury.  They were still both living there in the 1881 census.  Jacob died in 1884 aged 84. 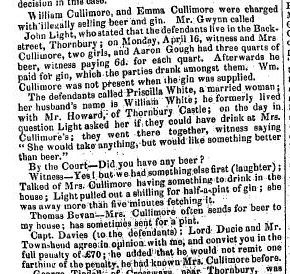 William Cullimore – at the time of Daniel Pitcher’s loan in 1847 William Cullimore was living in the property then a beerhouse known as ‘The Rose and Crown‘.  We haven’t been able to find any connection between William Cullimore and Martha Cullimore who lived in the house previously.  The 1841 and 1851 census shows that William ran a large beer house and lodging house in what would later be 43 and 45 St Mary Street.  In the 1841 census William was described as a beer retailer living with Emma Mowcell, Mary Mowcell and son, William aged 11.  There were eight other people living there who were either lodgers or servants.  In the 1851 census William was a beer house keeper aged 47 living with his wife, Emma aged 37 and son William aged 18 and William’s sister, Ann, a general servant aged 30.  Also living there were Emma’s widowed mother, Mary Mowcell a laundress aged 76, seven lodgers, one visitor and two servants.  That makes a total of fifteen people in the one house!

All this is particularly interesting.  The Rose and Crown was one of many such establishments operating in the area at the time – we have seen several reports of police raids on ‘Blind Houses’ as they seem to be called.  We are guessing that rather than any reference to visual impairment this refers to the fact that the customers were usually drinking behind windows where the blinds were down to hide the goings-on.  The article on the right appeared in a newspaper dated 11th August 1855 under the headline – ‘The Blind Houses again!’  They were fined £70 – which was a lot of money in those days.  We suspect that they were fined for selling gin, when they were only licensed for selling beer.

William Newton – the 1859 rate book shows that William is now living in the house.  Click here to read more

Charles Osborne  – the 1861 census shows the house was occupied by Charles Osborne, a sawyer aged 29 living with his wife, Ann aged 25 from Cromhall, Ann’s widowed mother, Elizabeth Smith aged 65 and two boarders.  Charles is also listed as the tenant in the 1862 rate book.

By 1885 the property had been divided into two separate houses, later known as 43 and 45 St Mary Street.  These continued to be let out to tenants.