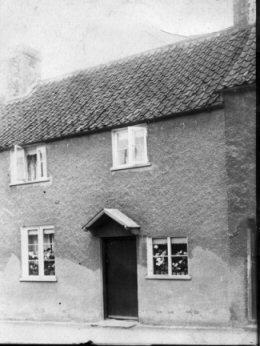 We are grateful to South Gloucestershire Council who allowed us to copy the deeds of this properties.  The records show that the two houses (later known as 43 and 45 St Mary Street) were originally a single property which had a very long history.

The earliest document is dated 29th May 1719 when the property was owned by Nicholas Chitts, but the history of the property goes back a lot further and the owners and occupiers are listed in the document.

The first occupant listed was John Reason(?), then his daughter, Margaret and her husband, John Byrd the elder (who was Mayor in 1651/2, 1653/4 and 1659).  The next occupant was Richard Chitts who bought the property from John Byrd the elder.  Then came John Byrd the younger (who was also Mayor of Thornbury) and his wife, Edith and then Elizabeth Chitts (the wife and relict of Richard Chitts).  She was followed by Richard Chitts (the grandson of Richard and Elizabeth Chitts and son of their son, also Richard) who inherited the house.  Richard Chitts left the property for the use of his wife, Jane, during her lifetime and then it was to be left to ‘her heirs begotten on her body by the said Richard Chitts her husband but if she was not with child by said Richard Chitts her husband then after her decease to return to his brother Nicholas Chitts and his heirs for ever’.  Richard and Jane had no children.  Following Richard’s death, Jane married Cornelius Lawrence, a shoemaker of Berkeley and in 1719 they were living in the house.

On 13th August 1718 part of the back garden ground of this property was sold by Cornelius Lawrence and his wife, Jane, Richard’s brother, Nicholas Chitts and Nicholas’s eldest son and heir, Richard Chitts, blacksmith of Westbury.  The new owners were a group of Dissenting Ministers from around the area.  They used the land to build a Presbyterian Meeting House on it.  By May 1719 the Meeting House was built. (Note this Meeting House was replaced by the new Chapel built in 1825 on a piece of land on the corner of Chapel Street and Rock Street.  The old Meeting House was initially used as a Brewery and then as a private house which became known as 14 Rock Street).

On 29th May 1719 Nicholas Chitts, husbandman of Tockington, sold the rest of the property.  At the time of the sale the property was described as ‘all that messuage  between the house formerly occupied by Robert Bedggood on the southward thereof and the tenement formerly occupied by Margery Barton alias Huggins and since of Margery Jones widow on the north’.  We note that Nicholas Chitts married Eidith Harrell in Coaley on 25th August 1692.

John Gayner – the new owner in 1719 was John Gayner the elder of Thornbury.  On 10th and 11th October 1740 John Gayner, an apothecary and surgeon of Thornbury sold the property to Theophilus Tanner a tailor for £25.  The property was then occupied by George Cossham, carpenter and Hester Cox a spinster.  Click here to read about John Gayner and his family.

Theophilus Tanner – Theophilus was baptised on 8th September 1700, the son of Samuel Tanner.  Theophilus became a tailor.  On 17th April 1748 he married Elizabeth Nichols at Thornbury. Theophilus died aged 52 and was buried on 23rd February 1752.  In his will dated 30th October 1749 he left the property for the use of his wife, Elizabeth, during her lifetime and after her decease it was left to their daughter, Catherine, the wife of Benjamin Leach. Catherine had married Benjamin Leach in Thornbury on 1st August 1752.

A schedule of documents in the deeds of 28 Castle Street suggest that Benjamin may have acquired that property from John Nicholls on 27th January 1756.  It is possible that John may have been related in some way to Benjamin’s wife through her mother’s family.

Benjamin was Mayor of Thornbury in 1762/63.  Benjamin and Catherine continued living in the property in St Mary Street.  Presumably it was while they were living in this house in 1765 that they had the alarming experience of the man in the closet as reported in the Bath Chronicle of 14th February 1765.  We have a thumbnail image of the report here on the right.  Please click on it to read it.

On 1st March 1793 they arranged a mortgage for £50 with Hugh Parnell gentleman of Kington.  In 1798, this mortgage was later assigned to William Osborne following the death of Benjamin and Hugh.  Benjamin died and was buried on 30th November 1794.  Catherine died on 25th April 1800 aged 63.  The property was inherited by their son, Benjamin Leach who had been living there with his parents.  He had also become a tailor.  On 12th January 1804 Benjamin jnr married Mary Latch, the daughter of Joseph Latch and his wife, Mary(nee Grove).

On 25th March 1805 Benjamin Leach jnr sold the property to Thomas Winstone, cordwainer.   At that time Thomas Moxham and William Herbert living in the house.  Benjamin appears to have moved to live in the house which later became 14 High Street.  Benjamin died aged 50 on 21st July 1824.  In his will Benjamin left the property to the use of his wife during her lifetime and then it was pass to Mary Ann Vaughan, his adopted daughter.  The 1840 Tithe Survey shows that 14 High Street was then owned by ‘Mrs Leach’ and let out to James Clutterbuck.  Mary Leach reached the age of 99 and she died in Banbury on 2nd April 1868.

Thomas Winstone – Thomas bought the property on 25th March 1805 from Benjamin Leach jnr for £165.  Thomas borrowed £150 from John Barton, a yeoman from Kington.

On 15th October 1808 Thomas Winstone a cordwainer signed an apprenticeship agreement with the Overseers of the Poor of Olveston regarding Isaac Watkins aged 14, “a poor boy of the parish of Titherington Olveston whose parents Joseph Watkins and Jane are not able to maintain him.”  The Overseers of Olveston  paid £15 to Thomas which discharged their responsibility to Isaac as a “poor boy.”  Isaac was indentured to live with Thomas and his family until he was 21 years old.  Isaac undertook  to faithfully serve his master “according to the power and ability of him the said Isaac Watkins.”  Thomas undertook to teach Isaac “the craft mistery (sic) and occupation of cordwainer” and to provide sufficient “meat, drink, apparel, washing, lodging and all other things needful or meet for an apprentice.”

Thomas died on 2nd June 1822 aged 61.  Unity died on 17th December 1833 aged 79.  Thomas died intestate and his son, Thomas, also a cordwainer, had to make a declaration claiming his right to the property.  He did this on 14th October 1836 and sold the property on the same day to Daniel Pitcher.  Click here to read more about Thomas jnr

Daniel Pitcher – the 1840 Tithe Survey shows that Daniel owned the property.  The Survey indicates only one house referred to as Plot 141 – a house and garden owned by Daniel Pitcher and occupied by Jacob Withers.

Daniel was a saddler living in the High Street and he had been Mayor of Thornbury in 1831.  We know that Daniel was a saddler born about 1775, the son of Daniel Pitcher, another saddler, and his wife, Elizabeth.  Daniel had first married Mary Forest from Olveston on 14th November 1811.  He married Bethia Taylor on 1st December 1822 and this was his second marriage.  Daniel died aged 77 years on 19th July 1852.  In a simple will written on 14th September 1849 he appointed his wife, Bethia, sole executrix and left all his real and personal estate to her.

An indenture of Mortgage dated 18th June 1847 shows that Daniel Pitcher arranged a loan of £200 from William Parker and put up several of his properties (including this one) as security.  Daniel died on 19th July 1852 and it appears his widow, Bethia could not repay the debt which stood at £15 15s.  On 13th July 1854 Bethia sold the properties to William Parker and this gave her £7 over and above the sum needed to pay the debt.  Click here to read more about Daniel Pitcher

William Parker – on 13th July 1854 William bought the properties from Daniel Pitcher.  William Parker was described as a gentleman from Frampton Cotterell.  The 1861 census shows William was was farmer aged 64 living in Frampton Cotterell.  the farm was 57 acres.  William is shown as being widowed, but he is shown as living with Louisa Blackmore noted as being ‘Mistress’.  Louisa was unmarried aged 28 and had seven children.  A family tree shown on the Ancestry website shows Louisa and William never married.  She moved in to live with him at Park Farm, Tovey’s Green in 1852.  They went on to have 12 children.  Eight of the children went to London and started a firm ‘Blackmore Patterns’ in 1895 which they continued running until the 1940’s.  William Parker died of ‘senile exhaustion’ in 1876.

John Honeyborne – on 25th March 1862 John Honeyborne bought the properties, as a part of a large number of other properties, from William Parker for £400.  John was described as a shopkeeper of Thornbury.  The property was to remain in the Honeyborne family until 1941.  At some time before 1885, they converted the single house into two separate houses, which later became known as 43 and 45 St Mary Street.  These houses were let the houses out to tenants.

By 1876 the two houses were owned by Emma Stevens (John Honeyborne’s widow who had re-married) and the 1880 rate book shows Emma’s husband, John Stevens, to be the owner.  The 1885 rate book shows that the properties had been transferred to Austin Honeyborne, who was Emma’s son from her first marriage to John Honeyborne.  This source also shows us that the building had now been converted into two houses.  Austin carried on owning the properties until his death in 1899 after which his wife, Maria Honeyborne, became the owner.   In the division of property which took place following Maria’s death in 1914, the two houses and the one next door (number 41 St Mary Street which was acquired separately) were left for Austin Walwin Honeyborne.  The Honeybornes were still shown as owners of the properties in the 1926 Rate Book.  Click here to read about the Honeybornes

On 3rd February 1941 Austin Walwin Honeyborne sold the two houses, 43 and 45 St Mary Street to Sir Algar Stafford Howard for £250.  On 25th July 1946 he sold the properties to Phyllis Mills, the wife of Robert Mills of Castle Street for £350.