About 1885 the single property was converted in to two separate houses, later known as 43 and 45 St Mary Street.  Click the link above to read about the occupants of the earlier single property

Hannah Duncombe – the 1885 rate book shows the property was occupied by Hannah Duncombe.  The 1887 Rate Book indicates that she has recently vacated the house and moved to one of the Staffords Almshouses.  Hannah was born about 1825, the daughter of James Ford, an agricultural labourer and his wife, Mary.  In 1851 Hannah had been a dairy maid working in Aust.  In 1861 she was living with her parents in Easton Hill Lane.  On 17th November 1868 she married William John Duncombe, a porter at the Workhouse.  Click here to read more about Hannah William and Eliza Cook – the rate books and electoral registers from 1887 to 1935 show that the house was occupied by the Cook family.

We are grateful to Debbie Kerr, a great grand-daughter of William’s for providing some of the details about William and Eliza and for providing the photo of them shown on the right.  Please click on the thumbnail to see a larger image.

William Olive Cook was born on 16th October 1846.  He was the son of Charles Cook, an agricultural labourer, and his wife, Mary (nee Birt).  The censuses shows the family lived outside Thornbury in the region of Falfield and Milbury Heath.  The 1871 census shows William was an excavator living at Brinkmarsh.   On 10th August 1874 William married Eliza Gough in Bristol.  Eliza was baptised on 19th September 1852.  She was the daughter of George Gough and his wife, Edith.

It would appear that Eliza had been married earlier as there is record of Eliza, the daughter of George Gough and aged only 16 marrying in Thornbury on 5th July 1869.  Her husband was Alfred Kimbry (or Kimbury), a labourer and the son of John Kimbry.  We are not sure what happened to this marriage but we do know that Alfred was sent to gaol on 14th Jan 1869 for stealing three sack bags, the property of Joseph Staley at Thornbury on 28th October 1868 and also stealing an iron head of a hatchet the property of Mary Mogg at Olveston on 26th December 1868.  Alfred pleaded guilty of larceny from his master with previous conviction and was sentenced to 6 calendar month’s hard labour.

In the 1881 census William was away from home, but we don’t know where.  We know from the family that William worked as a dynamiter on the construction of the Severn Railway tunnel and it is possible that he was working there, although we still haven’t found him in the census.  Eliza is living in the home of her sister, Edith, now married to Thomas Longman.  Also living there in Gillingstool Road were Eliza’s sister, Mary aged 20, and Eliza’s children: George aged 2, Edith aged 6 and Mary Jane aged 5 months who was also noted as being born in Berkeley. 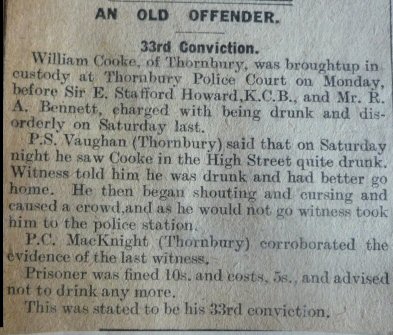 The 1885 rate book shows William was living in Gillingstool Hill, one of the two small cottages there.  The 1887 rate book shows ‘Mrs Cook’ as tenant of 43 St Mary Street.  The 1890 rate book lists William Cook as the tenant.   The 1891 census shows that Eliza is living with the children in 43 St Mary Street.  Eliza seems to be running a small lodging house as there are 3 lodgers living there with her and her children.  William is again away from home.  Their daughter, Edith, has also moved away to become a servant at the Ogborns in the High Street.  The 1901 census shows William and Eliza were still living in the same house with Dora, Rose and Alice.  Eliza was now listed as a laundress.

The Gazette of June 27th 1908 suggests one reason why William Cook was difficult to trace in the Thornbury area.  The report says that he was appearing in court on a charge of drunkenness and that on this occasion he had been seen chasing his wife down the road with a hatchet.  William it seems had recently been discharged from prison where he had been on a similar charge of drunkenness.  A newspaper report of the earlier incident says that in May 1908 William had been sentenced to one month in prison.  In June 1908 he was sentenced only to one day’s imprisonment.

We know from looking through the Gazette newspapers that William got into trouble with the police on various occasions, but initially chose not to mention it on the website as his behaviour seemed typical of a number of the inhabitants of the street who seemed to enjoy a good time.  When we saw the article on the right, we thought it worth displaying as it would be a shame to leave it locked away in the archives with no-one seeing it!

Of William and Eliza’s children:

John & Hilda Daley – the 1946, 1954 and 1958 electoral registers show that John Arthur and Hilda K Daley were living at 43 St Mary Street.  We understand that John was born in 1906 the son of an organ maker.  John married Hilda Johnson in the Bristol area in 1930.  Their son, Norman was born in 1931.  John worked for the fire service and partly as a result of his experiences fire-fighting in the Blitz he moved the family outside of the city.  After a short stay in Eathcott, they came to Thornbury where John had a series of jobs, working for Trayhurns, the butchers, Thompsons and Wilkinsons, the bakers, and he was a postman for a time before he got a job at the BAC aircraft factory.

Their first home in Thornbury was in 34 Gloucester Road where they were let rooms by Maud Phelps, the widow of John Evomy Phelps.  They then moved to 43 St Mary Street which they rented from Robert (Bob) Mills, the painter and decorator who lived at 28 Castle Street.  In 1955 Norman married Dorothy Rudledge and they moved to live at 20 Rock Street.  John and Hilda were listed as living in the house in the 1958 electoral register but had left by 1959.  By 1961 they had moved to Alveston and then to Roehampton, London.