About 1885 the single property was converted in to two separate houses, later known as 43 and 45 St Mary Street.  Click the link above to read about the occupants of the earlier single property 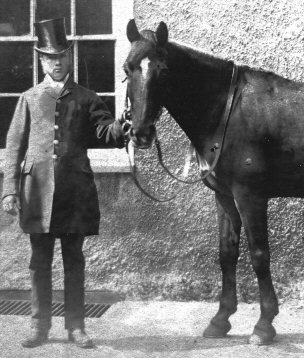 The Liddiatt family were living in 45 St Mary Street for over 80 years and they were only family to live in the house before it was demolished in the early 1960’s.  The first record we have of them living there was the 1885 Rate Book which shows the house occupied by William Liddiatt.  The photo on the right is copied from the Thornbury Museum photograph archive where it is noted as being William Liddiatt.

William Liddiatt – was baptised on 3rd July 1859, the son of Daniel Liddiatt, a labourer and his wife, Hannah (Diana) (nee Screen).  In 1861 William was living in the High Street with his parents and his sister, Ellen and brothers, Charles and Henry.  In 1871 census they were still living in the same house.  Click here to read about Daniel and Hannah Liddiatt

In 1878 William married Ellen Bennett.  Ellen was baptised at Oldbury on 24th October 1858, the daughter of Matilda Bennett.  The photo on the left below shows Ellen in 1922.

The 1881 census shows William and Ellen living with William’s parents at 23 St Mary Street.  William was a coachman and he and Ellen already had two children: Phyllis born about 1878 in Oldbury and baptised Phyllis Liddiatt Bennett in Oldbury on 12th February 1878 and Mary Diana born in 1879 and baptised on 1st January 1882.

The rate books show that by 1885 William had moved the family to 45 St Mary Street.  Beatrice Susanna was baptised on 1st January 1882 when William was a labourer.  When William Arthur and Herbert Thomas were baptised on 2nd March 1884 and 4th December 1887 respectively William was a groom.

In the 1891 census William was a groom and gardener aged 31 living there with his wife, Ellen aged 32 and their children: Phyllis aged 13, Mary aged 11, Beatrice aged 9, William aged 7 and Herbert aged 3 and William’s brother, Henry a general labourer aged 32. 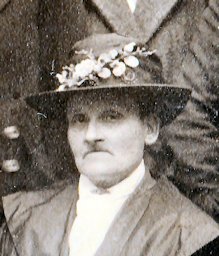 The 1911 census shows William was a jobbing gardener.  He and Ellen were living in the house with three of their children: Mary Diana, a cook aged 31, Herbert Thomas, a postman aged 23 and Mildred  Nora, an apprentice to a dressmaker aged 14.  William and Ellen carried on living in the same house.  The photograph on the left hand side shows Ellen Liddiatt in 1922.  William died on 18th September 1927 aged 68 years and Ellen died on 2nd June 1946 aged 87 years.  After their deaths, Polly (Mary Diana) carried on living there until at least 1961.  The photograph on the right hand side below is of Polly Liddiatt in 1922.  The 1965 electoral register shows Polly had moved to 3 Silver Street.  She died on 2nd August 1965 aged 85 years. 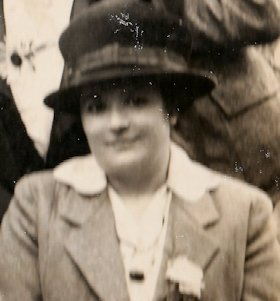 Of William and Ellen’s children:

Phyllis – married Robert Mills in 1903.  See also our album of photographs of the Mills and Liddiatt family

William Arthur – baptised on 2nd March 1884 William moved away from Thornbury but moved back by 1921.  Click here to read more

Wedding of Mildred Liddiatt to Alfred Stone in 1924

Mildred Nora Kate – born on 6th July 1896.  Thornbury Museum is fortunate to have been given a little package of school reports and other family information relating to Mildred and her family.  When Milly left the Council School in 1910 she was graded as ‘excellent’ in all her subjects and given the same grade for her conduct, progress and attendance.  She was noted as being the ‘Top Girl’ in one of her earlier reports.  Milly married Alfred Ernest Stone on 17th April 1922.  Albert was a compositor from Pontarddulais in Glamorgan and the son of Alfred Stone, a painter.  Below on the left we have a thumbnail image of what we believe to have been their wedding.  Please click on the image for a larger photograph.

Herbert Thomas – in 1924 Herbert married Elsie Burston.  In 1927 when their first child, Cecil Herbert, was baptised Herbert had become a postman and the family were living in Castle Street.  A second child, Beatrice Maud, was born on 26th January 1931.  The 1931 electoral register shows that they had moved to Eastland Avenue.  Herbert collapsed and died in the Gloucester Road on his way to the Post Office on 16th October 1946 aged 59.  The cause of death was the effects of pneumonia.  He had been a postman for 40 years.  He saw active service during the First World War.

Hilda – married William Ray Reeves on 27th September 1922.  William was a chauffeur and the son of Edward Reeves, a mason from Berkeley.