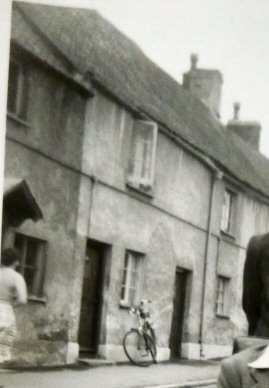 We apologise for the poor quality of the photo on the left, but it is the only photo we have of the numbers 47 and 49 St Mary Street.  The house on the extreme left of the photo is part number 45.  We believe number 51 was similar to numbers 47 and 49.  We would love to hear from anyone with any photos of this end of the street.

Three other houses were built at various times at the orchard at the eastward end of the garden, fronting Rock Street.  These later became 16, 18 and 20 Rock Street.  Click here to read more

A family tree published on the ‘Ancestry’ website shows that Sarah’s maiden name was Stagg, but we have been unable to confirm this.  Giles and Sarah were living in Oldbury when their son Mark was baptised on 13th May 1834.  They had moved to Thornbury however when their daughter, Emily was baptised on 25th June 1837.   These records show that Giles was a labourer.  Their son Charles was baptised on 23rd August 1840.

The 1851 census shows that Giles had moved the family into Bristol where they were living in Bath Buildings In Montpelier.  Giles was working as a milkman born in Oldbury.  He and Sarah had two of their children at home:  Mark a farm labourer aged 17and Charles who was aged 11 and still at school.  In 1858 Sarah died and Giles re-married.  His second wife was Ellen Savery.

In 1861 Giles and Ellen were living at 10 Union Place, St James in Bristol. Giles was working as a dairyman. He and Ellen had had one son, Frederick who was aged 2.   We have no further information about this family.

Charles Exell – the 1851 census shows that Charles was living in the house which became number 47 St Mary Street.  Charles was described as a labourer aged 52 from Thornbury living with his wife, Emma aged 40 and their children: Charles aged 17, Mary aged 10, Emily aged 5 and John aged 7 months.  Note in some sources the surname used by the family was recorded as ‘Excel’ – we do not know which of these names is correct.

Charles married Emma Thorne on 27th March 1830. They had several children:  Charles baptised on 9th June 1833, John baptised on 23rd July 1837, both whilst the family were living in Crossways.  When Ellen and Mary were baptised on 2nd February 1842, the family’s address was given as the Poorhouse.  Two more children were baptised when the records just show their address as ‘Thornbury’:  Emily baptised on 7th June 1846 and John baptised on 10th November 1850.  The first John had died aged 9 and was buried on 16th April 1845.

The 1876 rate book shows the occupants in the three houses in a different order as the 1881 census and later rate books.  It is possible that the families moved houses, but we suspect that the sequence of the people in the 1876 rate book is misleading.  We have therefore adjusted the sequence to reflect the position in other records.

Hannah Smart – the 1880 rate book and the 1881 census show that 47 St Mary Street was occupied by Hannah Smart.  We believe that she may have been living in the 1876 rate book.  The census shows that Hannah was a widow aged 44 living with her sons, Henry a labourer aged 17, Albert aged 14 and William aged 5.

Hannah was the daughter of George Gough, an agricultural labourer and his wife, Jane who were living at Crossways at the time she was baptised on 31st January 1838.  In 1860 Hannah married William Smart, a labourer and in the 1861 census we think that William and Hannah were living at 9 Upper Bath Road with Hannah’s father.  In 1871 William and Hannah were living in Chapel Street.  William was an agricultural labourer aged 34 living with Hannah aged 32 and their children: George aged 10, Henry aged 7 and Albert aged 3.  William Smart died aged 36 and was buried on 12th February 1877.

Hannah married again in 1889 – the marriage was registered in the Bristol area and her husband was Thomas Downes.  The 1891 census shows that Thomas and Hannah continued living in 47 St Mary Street.  Thomas was a sawyer who was born in Gloucester.  Hannah’s son, William Smart aged 14 was living with them.

In 1890 William and Hannah’s son, William got into trouble aged only 14.  He was one of a group of boys charged with assaulting a 14 year old girl, Mary Ann Tandy.  They were charged with “beating, wounding, ill-treating and doing other wrongs to her.”  The court was told that the two other boys, William Sainsbury and Morgan Riddiford, had been out following a group of girls in Thornbury with a third boy, 14-year-old William Smart, one Sunday evening.  Mary, who was one of the three girls being followed, was in the service of local farmer John Clarke at Vilner Farm.  When the boys set upon Mary, her father Lewis heard the screams and ran to investigate.  William Smart fled the scene but later the court records show he gave evidence about his two friends.

Later records suggests that Thomas and Hannah separated after a few years together.  In the 1894 ‘Hannah Smart’ is listed as the occupant of the house and there is no sign of Thomas.  In the 1899 rate book Thomas is living in 6 Bath Road and Hannah (shown again as Downes) still living in 47 St Mary Street.  The 1901 census confirms this separation.  Hannah is shown as being a married charwomen living in 47 St Mary Street with her nephew Albert Smart aged 11 and two lodgers, Thomas Spill an ordinary agricultural labourer aged 56 and Lilly Edwards aged 33.  Meanwhile, Thomas Downes was a wood sawyer visiting Elizabeth Prewett in 12 Upper Bath Road.   Hannah died aged 64 and was buried on 11th September 1901.  In 1905 Thomas was living in Chapel Street in a house owned by Mrs Shepherd.  He died in 1908 aged 70.

William Smart their son signed up for the army in 1895 giving his age as 19 years and 9 months. His mother Hannah was given as next of kin. He joined the Royal Artillery and served in India and China.  He was given a medal and clasp in 1900 for the Relief of Peking.  He was posted back to England in 1904 and transferred to the army reserve.

He married Eliza Parsons in 1904 in Bristol and the couple went on to have three children.

Samuel Barge – the 1905 and 1910 rate books show that Samuel Barge is occupying the house. We think that Sam may have lived in the house until his death in 1933.   Click here to read more

Reginald Charles Joseph Pearce – the electoral registers which we have seen from 1938 to 1954 show the house was occupied by Reg Pearce and his wife, Edith Mary.  Reg was born on 5th December 1913, the son of Albert Edward Pearce of Kington Lane and his wife, Gertrude (nee Peters).  Reg attended the National School in Thornbury (now called St Mary’s) from January 1918 until 1926 when he left to start work.

In 1937 Reg married Edith Mary Hopkins, whom we believe was born on 13th July 1913, the daughter of Charles Edward Hopkins and his wife, Clara May (nee Webb).  We understand that Reg worked as a gravedigger at the Cemetery.  We were also told that he was well known in Thornbury for growing wonderful mixed chrysanthemums on his allotment which he sold to the local shops or directly to the public.  Reg and Edith had one son, Derek C.  The 1958 electoral register shows that the family had moved to 77 High Street and they continued to live there for about 50 years.  Reg died on 9th December 1995 aged 82.  Edith died on 2nd July 2009 aged 96.

The house was demolished in the early 60’s to make way for the new car park.