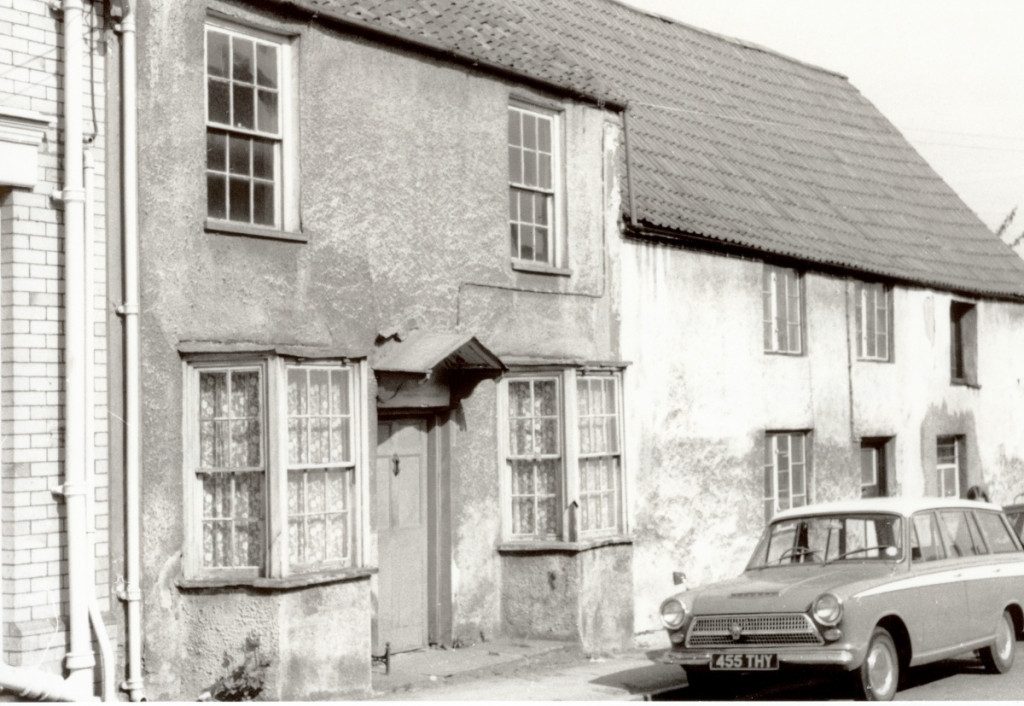 This photo was taken in 1969.  It shows the two houses on the west side of St Mary Street just down the street from the Barrel.  Number 6 St Mary Street was the house with the two bay windows on the ground floor and Number 4 St Mary Street was next door.  The part of the building at the bottom (northern) end of number 4 was a barn used for storage. 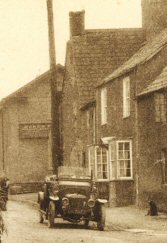 The photo on the right shows another view of 6 St Mary Street looking up towards the Barrell.

We are grateful to South Gloucestershire Council who allowed us to copy the deeds of this and adjoining properties in St Mary Street and Silver Street.  The records show that 6 St Mary Street was built by Alexander Thorne in the early 1830’s on the site where a stable or slaughterhouse stood which we know had been occupied by George Rice, the butcher.

Alexander Thorn (or Thorne) – the earliest reference to the property was an indenture dated 17th and 18th December 1831 in which Alexander Thorn, a tailor of Thornbury arranged a mortgage of £100 from Hannah Collings of Sodbury.  Alexander was listed as being the owner and occupier of the same property in the 1831 and 1832 Land Tax records.  In 1835 Alexander borrowed another £50 from Hannah.  By 1839 Hannah had died and the mortgage passed to William Collings.

An indenture dated 23rd and 24th February 1840 confirmed that Alexander had paid off his debts to William Collings, formerly an innkeeper of Kingswood and now a commercial traveller in Sodbury.  It mentions that Alexander had recently built the house on the site where a stable or slaughterhouse formerly stood which has occupied by George Rice as a tenant of Alexander’s.

The 1840 Tithe Survey shows that Alexander owned Plot 176, a little group of four houses and courts on the junction of St Mary Street and Silver Street.  Alexander occupied one of the houses. We assume that it was the one which became 6 St Mary Street.  The 1841 census shows Alexander was a tailor aged 35, Sarah was aged 30, Emily aged 12, Charles aged 10, Elizabeth aged 7, Henry aged 6, Kezia aged 3, and Edgar aged 9 months.

Alexander was baptised in Thornbury on 11th December 1802.  He was the son of Alexander and Mary Thorne who appeared to live in Silver Street.  Mary died aged 42 and was buried on 13th January 1819 and Alexander died shortly after, aged 45.  He was buried on 18th April 1819.  Alexander’s name appears in the Borough Rent Roll as being a property owner in 1807.  We don’t know when or where Alexander (Junior) married Sarah Virgo.  In the 1851 census Alexander was a journeyman tailor aged 46, Sarah was a tailoress aged 48 and their children: Emily a dressmaker aged 21, Elizabeth a milliner aged 17, Henry a tailor aged 16, Edgar aged 10, Albert aged 5 and George aged 2.  Alexander’s son, Charles, had moved away from home.  He married Esther Hunt in Bethnal Green in 1853 and spent the rest of his life in London.

Jesse Cossham – on 6th December 1852 Alexander and Sarah Thorn arranged a loan of £60 from Jesse Cossham, carpenter of Thornbury.  When Alexander and Sarah were unable to repay the money owed Jesse became its new owner although the Thornes continued to live there.   Following Alexander’s death in 1875, Jesse put the property up for sale at auction on 10th June 1875.  It was described as a ‘Substantially-built messuage with convenient offices and court-yard adjoining’.  On 24th July 1875 the property was sold to Samuel Crew, hotel proprietor of Thornbury for £100.  At the time of the sale the house was void.  Click here to read more about Jesse

Samuel Crew – the Rate Books show it was owned by Samuel Crew in 1876 and 1880.  Samuel was born in Bitton about 1835.  The 1861 census shows him living in St John Street with his wife, Elizabeth.  Samuel was a carpenter at that time.  Click here to read more

On 3rd December 1883 Samuel conveyed the property to John Powell of Thornbury, mason for £103. It was occupied by James Bendall at the time of the sale.

William Yarnold –  William acquired the property on 21st January 1885 for £117.  William was a watch and clock maker trading on the High Street.  William retired from watch making in 1926, when his fifth son Victor Gerald Yarnold took over the business.  In his will dated 18th September 1940 William appointed his sons Frederick William Yarnold of Malmesbury, Percy Yarnold of Nailsworth and Victor Gerald Yarnold of Thornbury to be his executors.  On 19th April 1945 in a codicil to his will he appointed Reginald Harry Yarnold of Gloucester to replace Frederick William Yarnold who had pre-deceased him. William died on 9th January 1947.  Click here to read more

The Hawkins Brothers – on 19th September 1968 they sold the property to Thornbury Rural District Council. Their address at the time was Hawkins House, High Street.  Click here to read about the Hawkins family

In the town re-development, the house was demolished and a shopping arcade was built there. Click on the thumbnail on the right to see where the houses were.