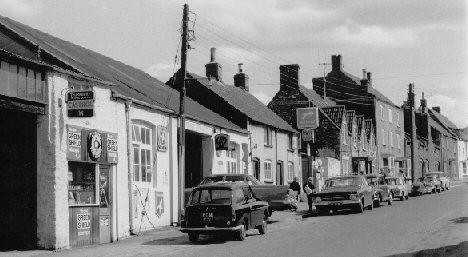 The photo on the left taken in 1969 shows the east side of St Mary Street just up from the Plough.  The buildings on the left were used by Thornbury Motor Company.  The pair of houses next to the tall sign advertising National Benzole were numbered 7 and 9 St Mary Street when house numbering was introduced in the 1950’s.

The early history of these two houses is hazy.  The 1840 Tithe Map shows it as Plot 209 described as a ‘schoolhouse etc’ owned by the Feoffees of Thornbury & Board of Guardians.  It was located at that time adjoining Plot 208 a group of buildings owned by the Board of Guardians and described as a ‘workhouse etc’.  We also know from other sources that this group of buildings included the old Court House.  We don’t know anything about this school, but it is likely to have been an extremely simple school servicing the workhouse.

We have a copy of a document headed ‘Charities vested in and under the Management of the Corporation’ seems to be written in about 1826.  This refers to the fact that “there were two old tenements in a ruinous uninhabitable condition standing in a corner of the street near the school house which appear to have been then used as an almshouse having four rooms below and four rooms above distinguished by the name of the Lower Almshouse. About forty years ago Mrs Kingsmill Grove who was then the owner of a field at the back of these old houses which were then in danger of falling down, took them down and built two cottages by way of substitution for the same on the site of old barn which was part of the premises belonging to Atwells Charity, situate in the Back Street adjoining the workhouse.  These cottages were for some time considered and used as belonging to Staffords Almshouses, but a few years ago the workhouse of Thornbury being let to farm Mr Isaac Roberts, an inhabitant of the parish to whom the management of the poor had been committed by the Vestry, converted the said two cottages into offices for the said Workhouse, which alteration appears to have been unwarranted, and in prejudice of Staffords Charity.  It is now intended to take into consideration at a vestry meeting the expediency of restoring these two cottages to the Feoffees of Staffords Hospital for the use of that charity”.

There is a reference in the Mayors Accounts Book which show that the two original houses (known as the Low Almshouses’ were donated to the Town by Katherine Rippe in 1594 at the same time as she donated her ‘Tan house’ which was used for a long period as the Parish Workhouse.  We can’t actually find any reference in the will to Katherine donating these properties.  She did stress in the will that the income of 3s 4d derived each year from her Tan House should be directed towards the maintenance of the almshouses so perhaps she had already given them before the will was written.

There is mention in Caffalls notes that “The Lower Almshouse had 4 rooms below and 4 rooms above.  They were designed for accommodation of 4 families.  The last occupiers were Mary Hill, Elizabeth Chappel, Elizabeth Worsley and John Liddiatt who had a wife and several children.  They all quitted the premises for fear they should tumble down upon them about the year 1794″.

In the 1841 census there doesn’t appear to be any houses mentioned in this part of the street.  By 1851 the buildings are occupied by two ‘almswomen’.  These almshouses were managed by the Feoffees of Thornbury Charities until the Thornbury Town Trust took over responsibility in 1890.  The Account Books appear to show that there was no rent for the use of the almshouse.

The houses continued to be used as almshouses by the Town Trust up to the mid 1960’s.  The Town Trusts records show that there were regular problems with the condition of the properties.  In the 1930’s there were plans to demolish both properties and to build new houses there, but these plans were rejected because of the cost.  Major refurbishment was agreed, but this seems to have been done on the cheap and it wasn’t long before there were further concerns about their state.  In 1960 the Trust received an offer of £4000 for the two houses from the Cleveland Petroleum Company.  The Trust approved the offer, wanting to use the money to build new houses elsewhere, but the petrol company never followed up the original offer.

About 1967, the houses were purchased by the District Council under a compulsory purchase order as part of the central re-development.  They were demolished and the land was eventually used in the 1980’s when a new road was made linking Rock Street to St Mary Street.