Licensees of the Horseshoe Inn 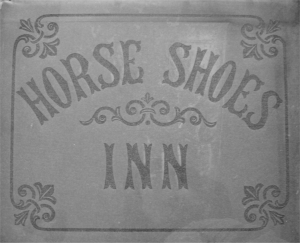 Our earliest reference to the Horseshoe being run as a public house was in 1755 when it was included in the list of licenced victuallers in Gloucestershire.  We are not sure if the beerhouse continued there without a break, but it finally closed in 1907.  It was called ‘The Horse Shoe Inn’ from the 1871 census onwards, although it may have been called that earlier.  It is interesting to see a sheet of etched glass in Thornbury Museum which was taken from the pub window – as the photo on the right shows it calls the pub “Horse Shoes Inn”.

On this webpage we have listed what we know about the licensees and their families:

William Attewell – William was referred to as the occupant of the property “called the Horseshoe” in the will of Richard Williams signed in 1785 but not proved until 1820.  We assume that the premises must have been a beerhouse even at this time as it as described in these terms.

We have very few records that show when and where William lived in Thornbury.  However the Land Tax records do show that William was the tenant of Richard Williams in a property that appears to be the Horseshoe from at least 1780 to 1784 (and presumably until at least 1785) but he is not in the record for 1775.  Sadly at present we do not have the complete set of Land Tax records and so we are not able to give further information about the dates.

Although it seems likely that this was the William Attewell who married Paulina May on the 6th April 1790 in Thornbury, we do not know where he was living in the parish at that time.  The record of their marriage appears on the Ancestry website which shows the original entry in the parish register.  The register merely says that the couple were both “of this parish.”

It is possible that the family at times either lived just outside the parish of Thornbury or that they attended a church other than the parish church of St Mary’s in Thornbury.

Scribes Alcove has a record that “Paulina Attewell” died in Milbury Heath aged 80 years and was buried on 16th February 1833.  Milbury Heath is outside of Thornbury but it appears that Paulina was buried in St Mary’s churchyard in Thornbury.

Ephraim Wilson – a newspaper article dated 17th September 1859 mentions that Ephraim was ‘of the Horseshoe beerhouse’ when he was driving his potato cart back from Bristol when Daniel Iles fell off and was killed.  The 1859 rate book shows Ephraim was occupying the property.  The 1861 census shows that the Horseshoe was occupied by Ephraim Wilson, a beerhouse keeper and potato dealer.  A trade directory shows Ephraim as a beer retailer in St Mary Street as early as 1856 so it is likely he moved there shortly after Emma Wilkes moved out following her marriage to Henry Knapp in 1853.

Ephraim was baptised on 25th February 1826, the son of James Wilson, a farmer from Crossways and his wife, Elizabeth.  Ephraim was not living with his parents at their home in Crossways in the 1841 census.  On 2nd March 1845, Ephraim married Charlotte Parsons, the daughter of Henry Parsons, a labourer.  The 1841 census shows that Charlotte had already left home and she was living with John Thatcher a journeyman shoemaker aged 25 in Back Street (later known as 8 St Mary’s Street) and that Charlotte had a son, Henry Enoch Parsons aged 5 months.  He was baptised on 31st October 1841.

In 1851 Ephraim was living at the house later known as 1 Bath Road.  He was described as a “potato hallier” aged 25 living with his wife, Charlotte, aged 28 from Cheddar and Henry Parsons aged 11, a son of Charlotte’s from before her marriage.  Also in the household were; Ephraim’s sister, Hannah Wilson aged 13, a visitor Lucy Ashwell aged 23 from Bristol and her son, Edwin aged 2 and lodgers, Martha Cullimore unmarried laundress aged 60, Thomas Savery a journeyman clock and watchmaker aged 57, his wife, Elizabeth aged 60, and their son, Robert an agricultural labourer aged 19.

By the 1861 census Ephraim had moved the family to St Mary Street where he was operating a beerhouse which was later to be given the name of the Horse Shoe.  He was also still working as a potato dealer so presumably Charlotte was running the beerhouse whilst Ephraim was away.  They now had a daughter, Annie aged 3, a servant, Hannah Hollister aged 16 who was described as ‘maid of all work’ and a lodger, Samuel Gough, a cordwainer aged 55.

Charlotte died aged 40 and was buried on 28th September 1862 and Ephraim died aged 37 and buried on 5th July 1863.  The beerhouse was then taken over by Ephraim’s brother, Thomas Wilson.

Thomas Wilson – Thomas Wilson took over the running of the Horse Shoe following the death of his brother, Ephraim in 1863.  He carried on running the in until he died in 1882 when it was taken over by his wife and then following her death in 1885 by their son, Henry Charles Wilson.  Click here to read more

Henry Charles Wilson – Charles took over the running of the Horse Shoe Inn following the death of his mother in 1885.  He is listed as a beer retailer and shopkeeper in a 1889 trade directory.  The 1891 census shows Henry Charles as a publican aged 26 living with his sister, Laura aged 22 and brothers, Joseph Thomas a saddler aged 19 and John a butcher aged 16 and a cousin, Annie, aged 33.

A newspaper report dated September 1892 shows that Henry Charles had got into trouble.  At the annual licensing meeting there was objection to the renewal of his licence on account of an unspecified conviction under the Licensing Act.  It was however noted that since the conviction the house had been thoroughly well conducted and it was decided not to proceed with any action.

The 1894 rate book shows Henry Charles had left the Horse Shoe and it had been taken over by his brother-in-law, William Charles Underhill, the husband of his sister, Laura.  Click here to read more

Charles was baptised William Charles at St Mary’s in Thornbury on 5 July 1868.  He was the son of William and Annie Underhill.  Charles also acquired an interest in running pubs.  His father had taken over the running of The Queens Head on the High Street and on 28 December 1893 Charles married Laura Wilson, the daughter of Thomas Wilson who had been the licensee of ‘The Horse Shoe’ from 1871 until his death in 1882.  The licence was then taken over first by his widow, Ann Maria, and then following her death in 1885 by her son, Henry Charles Wilson.  However in 1894 shortly after Charles and Laura’s marriage, Charles Underhill took over as beer-house keeper.  Charles left The Horse Shoe in 1898 and moved to ‘The Porter Stores’, which is now known as ‘The Barrel’.  Click here to read more

The 1899 rate book shows the Horse Shoe was vacant.

‘Mills’ – we understand from local pub historian, George Ford, that John Mills was a licensee for a short time in 1900.  The Bristol Mercury of 22nd June 1899 reports that the licence of the Horseshoe beerhouse was transferred from William Charles Underhill to James Mills.

Amy Emblin – a newspaper cutting of 1900 shows that Miss Amy Emblin from Nailsea had taken over the licence at the Horse Shoe Inn.  The 1901 census shows that Amy Emblin was the innkeeper, a single lady aged 30 born in Marshfield.  Her uncle, John Roberts, a widower aged 50 from Saltash in Cornwall was also living there.  She seems to have given up the licence in 1902 and in 1903 she married Frank Propert Peters.

Everett Delatour Cotterell – according to the Western Daily Press of 23rd October 1902 “Everett T Cotterell of Bishopston Bristol” took over the licence from Amy Emblin.  He was the publican at the Horse Shoe until 1904.  We don’t know anything about Everett except he and his wife, Gertrude Irene, had a daughter, Elsie Evelyn.  She was baptised on 1st February 1903 and the baptism record shows Everett as publican in St Mary Street.

Henry Thomas Holmes – took over the lease for the property on 5th September 1904.  His address previously was Chesham House, Lower Station Road, Staple Hill, Bristol and he is noted in the lease documents as having been a builder and contractor.  The Council School records show that the Holmes family moved from Fishponds to Thornbury in 1904.  They had two children at the school: Violet Maud born on 4th April 1896 and Edgar born on 24th March 1898.  One other child, Graham Archibald William was baptised on 21st November 1907.  The baptism record shows Thomas’s wife was Lavinia.  Henry had married Lavinia Perry in the Barton Regis area of Bristol in 1895.  Henry ran the Horse Shoe until it closed in 1907 and the school records show the family left Thornbury that year.  The Gazette dated 20th March 1907 reported that Henry was paid £175 in compensation for his loss of license.