Thomas was born on 19th April 1805 and baptised on 26th May 1805 in Thornbury.  He was the son of John Nelmes, a pig butcher and his wife, Hannah.  John died aged 48 and was buried on 11th December 1818 in the churchyard of St Mary’s in Thornbury in the same grave as William and Hannah Reeves.  It is possible that these were Hannah’s parents.  Hannah re-married in 1826 – her second husband was George Motley

The 1840 Tithe Map shows Thomas as owning Plot 207 located at the bottom of St Mary Street on its junction with St John Street.  This plot covers the area now occupied by The Plough Inn – there were no buildings where Trayhurns, the butchers were later to occupy.  The plot was described as a house yard and garden occupied by Ezra Amos.  It appears that Thomas Nelmes had moved to Bristol which is where he and the family were living in the 1841 census.  Thomas and Harriett had another son, Samuel on January 25th 1843.  The family moved back to Thornbury and in 1847 Thomas tried to sell the bacon-curing business at St Mary Street. 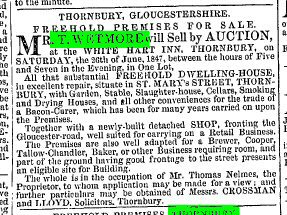 The advert on the right is interesting because it refers to a ‘newly-built detached shop, fronting the Gloucester Road’ which was included in the sale.  This clearly refers to the shop on the corner of St John Street and St Mary Street which we associate with the Trayhurn family.  The implication of the word ‘detached’ implies that the house (later to be called 1 St Mary Street) which lies between the shop and The Plough had not been built – and this is confirmed by the reference ‘part of the ground having good frontage to the street presents an eligible site for Building’.

An indenture dated 23rd June 1848 shows that Thomas sold the shop to George Thomas for £200.  The indenture mentions that a house was being erected on the land adjoining the shop.  Thomas retained the other house and his pig business which we believe to have been located at what we now know as The Plough.

The 1851 census shows that Thomas Nelmes was living in what we believe could be The Plough, or a building on the site of what we now know as The Plough.  The census shows him as a pig butcher, but the 1849 Hunt & Co. directory shows Thomas was also a beer retailer.  This might suggest that Thomas was running a pig butcher business and a beerhouse from the premises which came to be the Plough.  At the time of the 1851 census Thomas and Harriet are living in St Mary Street with their sons, Thomas and Henry.  Curiously their daughter, Harriett is living in Castle Street where she is described as a 21 year old unmarried school teacher who was living with her sister Mary who was 18 years old and her assistant.  They lived with their brother Samuel aged 8 and they seemed to be running a little school as they were other unrelated children listed as living in the house. 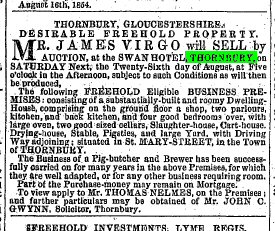 In August 1854 Thomas tried again to sell his remaining property in St Mary Street.  The advert on the left refers to the part of his property which we now know as being The Plough Inn.

It is interesting to note that the advert refers to the fact that ‘the business of pig butcher and brewer had been successfully carried out on the premises for many years’.  The 1849 Hunt & Co. directory lists Thomas as a beer retailer.  This might suggest that Thomas was running a pig butcher business and a beerhouse from the premises which came to be the Plough.

This time Thomas appears to have sold the property to Abraham Cole.  Thomas’s mother Hannah Motley died March 18th 1859.  By the 1861 census, Thomas and Harriet were living in 31 Crown Street, Glasgow in Scotland.  Thomas was aged 55 and Harriett aged 60.

We don’t know why Thomas and Harriett moved to Scotland or what happened to after 1861.  We know that Harriett died in Pasadena in California on 24th December 1891 in her 92nd year.  She was described as the widow of Thomas Nelmes of Thornbury, Gloucestershire.

We are indebted to Becky Croston who has sent us details of her family’s history, including extracts from a family bible which showed dates for various births and deaths.  We have used these in the following facts about the children of Thomas and Harriett Nelmes;

George – we believe that George was at first a teacher like his sisters.  The 1851 census shows that he was staying with a family in Chipping Sodbury High Street where he was a school master.  George married Mary Eliza Cole in Chipping Sodbury on July 3rd 1851.  Mary Eliza was the daughter of Rice Cole.  It is possible that the couple moved to Thornbury after their marriage.

The deeds relating to The Priory refer to a George Nelmes schoolmaster who lived there.  As two of their children were born in Thornbury it seems possible that George taught there in the early 1850’s.  A newspaper announcement of June 14th 1856 relating to the birth of their son may indicate that the couple had moved to Regent Street in Bristol by that time.

By the 1861 census George was living in Bath Buildings, Bristol and working as a printer’s traveller.  He was living with his sons, George A W aged 8 and William H aged 7, both born in Thornbury.  There is no sign of his wife.

The children of George and Mary Eliza included George Adolphus William born January 1853 in Thornbury and William Henry born in Thornbury on February 25th 1854.  The rest of their children were born in Bristol.  They were Alfred Ernest (1856), Alfred Hussey (1857), Arthur Hussey, Amelia Eliza, Ada Alice (1862) and Louisa Eliza (1864).

On December 30th 1865 there was a newspaper announcement that suggested all was not well in the Nelmes household “Caution -persons are requested NOT TO TRUST MARY ELIZA NELMES with goods of any kind after this date as I will not be responsible for any Debts she may contract. Dec 19th 1865 George Nelmes 33 Stanley Street Bristol.”

Harriett – in the 1851 census, she was living at 3 Castle Street.  She was described as a 21 year old unmarried school teacher who was living with her sister Mary who was 18 years old and her assistant.  They lived with their brother Samuel aged 8.  There are also some unrelated children, 7 year old boy Lacy Ford, 7 year old Sarah Screen and a 4 year old who we believe was called William Workman.  From this it would appear that Harriett is running a small school on the premises.  A trade directory for 1856 lists Miss Harriet Nelmes as running a ladies school in St John Street.

By 1861 Harriett was a teacher at the girls’ department of an orphanage which was in the district of St Andrew’s in Bristol.  Possibly this is one of the Muller homes.  The story of the George Muller Foundation is an interesting one and he was responsible for setting up five large homes for children in the Ashley Down area which accommodated an astonishing 2,000 poor children.

Harriett Nelmes was buried at what is now called the United Reformed Church in Thornbury.  She died aged 34 on 3rd September 1863.