The map of 1922 shown on the left clearly shows the position of the six small almshouses which were situated on the west wide of St Mary Street, just up from the rear access to the Swan Hotel.  These were known as Sir John Stafford’s Almshouses.

We only have a very fuzzy photo of part of the Almshouses which is shown on the right below.  The building is the one on the left of the photo.

The almshouses were managed by the ‘Trustees of Stafford’s Charity‘.  We have seen an indenture dated 25th December 1824 refers to an earlier indenture of ‘feoffment’ (i.e. the granting of a free inheritance of property) dated 1st March 1620 in which Sir John Stafford of Marlewood Park appointed as his trustees, John Sprint, Richard Attwells, Richard Hayes, Peter Hawksworth and John Parker.  He granted his trustees the ‘tenement or hospital house called or known by the name of Sir John Stafford’s Hospital and one garden adjoining to the same being then or lately divided into several small parts situate lying or being in Thornbury aforesaid in a certain street there called or known by the name of the Back Street then in one part in the occupation of certain poor people therein placed by the said Sir John Stafford which said houses were then lately erected by the said Sir John Stafford‘. 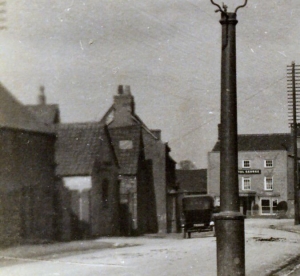 Almshouses on the left

So we know that Sir John erected a ‘hospital house’ some time before 1620.  It was described in the early 1800’s as being an ancient stone edifice with six rooms on the ground floor and six above inhabited by six poor aged widowers, widows or other single persons aged of 21 or over, of Thornbury and not having any child or children or other charge living with them.  Each person had an apartment below and one immediately above it.  Sir John Stafford made it clear to his his trustees or ‘ffeoffees’ should displace any misbehaved person.

The original garden of the almshouses which adjoined the main building was incorporated into the garden of the Swan Inn which was owned by Lord Howard.  This was later used for a coachhouse for the inn.  In 1970 the old coachhouse building was divided into two, one part being sold to the Council and incorporated into the service yard at the rear of St Marys Arcade, the other part retained by the Swan and used for storage.

In exchange for their garden the almshouse charity was given a garden plot on the opposite side of St Mary Street which was located between 9 St Mary Street and The Church Institute 11 St Mary Street.  This was more than double the size of the garden taken away.  This garden appears to have been let by the Corporation for income rather than used as a garden by the tenants of the almshouses and was used a car park in the late 1960’s until the new supermarket development was built.

Extra funding to support the almshouses and the widows living there was received from other sources including the bequest made by William Edwards and later the Will of Miss Mary Macdonnell which was proved 24th November 1870.  We know from a document dated 1893 that the bequest amounted to £108 4s 8d which was held in government stock at 2.15%.  The document transferred the administration of the trust from Mary Macdonnell’s trustees to the Charity Commission.

The 1910 rate book shows they were still owned by the Trustees of the Stafford’s Charity’, but we understand they were eventually incorporated into the Thornbury Town Trust which had taken over management of other almshouses in the town from 1890.  In 1923 the Trust applied for and received permission from the Charity Commission to sell the six almshouses which had been void for some time.  On 4th August 1923 the property including the 6 old almshouses were Helen Garfield Grace of West Shen for £50.  A newspaper article refers to the fact that they had void for several years ‘owing to lack of proper sanitary arrangements’.

The property was demolished by about 1928.  We are not sure what the Graces did with the property until the 1960’s when there were a group of single story buildings on it which were used as a garage.  On 16th January 1962 Helen Grace leased the property to Michael Edward Abbott Manning and others for £150 per annum.  The property was then described as ‘all that building fitted up and used as offices, lock-up garage showroom and greasing bay adjoining the entrance of the Swan Hotel yard’.  Mike Manning and his partners traded under the name of Thornbury Motor Company.  On 29th April 1968 Helen Grace conveyed the property to Thornbury Rural District Council.  The Motor Company were allowed to continue trading here for a few years (because I bought a car from them in 1969) before they moved to new premises built on Grovesend Road.

Click on the thumbnail below to see the full photo of the buildings used by Thornbury Motor Company.

occupants of the almshouses