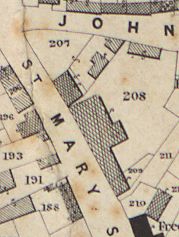 Early records of St Mary Street (or the Back Street as it was then called) in Thornbury mention a Tan house belonging to Katherine Rippe.  The first reference we have to this building is Katherine’s last will and testament dated 2nd August 1594.  She imposed a rent charge on this property ensuring that future owners would pay annually a sum of 3s 4d to the Mayor for the upkeep of an almshouse.

Thus, when we obtained copies of the Mayor’s Accounts we were able to trace the ownership of this property from that time.  We know therefore that as well as it being a Tan House, it was used as part of the old workhouse (which was replaced by the new one in Gloucester Road in 1839), then became a malthouse, a warehouse and finally a garage before it was finally demolished in the 1970s.

On the 1840 Tithe Map shown on the left above the Tan house was then part of the old workhouse buildings on Plot 208.  The large hatched area on this plot which adjoined St Mary Street was a group of buildings owned by the Board of Guardians of Thornbury Union.

We know that The Plough and the little almshouses (later known as 7 & 9 St Mary Street) existed in 1840.  The part of the Workhouse fronting St Mary Street was located between these two groups of buildings.  Another part of the Workhouse was a large house in the rear of these buildings with access to St John Street.  This became known as The Court House.  We have written about this property on a separate page.  Click here to read more

The photograph on the right below shows this stretch of St Mary Street in the 1960s when the buildings were used as part of the garage belonging to Thornbury Motors.  At least one of these buildings was thought to be very old.  In the 1960s the building to the right of The Plough was known as ‘the Malthouse’ (not to be confused with the other building on the opposite side of the road which was also known as ‘the Malthouse’).  We suspect that this building had its origins in Katherine Rippe’s tan house.  It is likely however that the building had been changed significantly in the 350 years since she owed it. 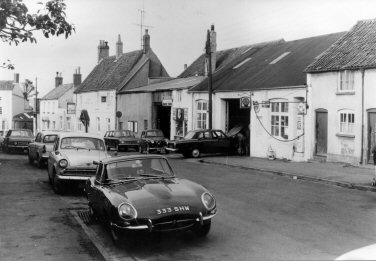 Katherine Rippe – in her last will and testament dated 2nd August 1594 she left her Tan House in the Back Street (now St Mary Street) with the adjoining land to her nephew Nicholas Baker subject to him and subsequent owners paying a rent charge of 3 s 4d each year to the Mayor for the upkeep of an almshouse for the poor.

Katherine was the widow of William Rippe, a tanner who presumably used the Tan House in connection with his business.  When Katherine died she left a considerable number of properties.  Most of these properties were left to nephews and nieces as her son had pre-deceased her.  She did however leave two properties, including the Tan House, for the benefit of the poor in Thornbury.  Click here to read more about Katherine and her family

The Mayors Accounts show that the owners of the property continued paying the 3s 4d right up to at least 1931.

Nicholas Baker – Nicholas was left the tan house by his aunt, Katherine Rippe in 1594.  She also left him the house in which she was living at the time she wrote the will.  We know they had a son called Henry.  It seems very likely that a letter in the calendar of Cecil papers in Hatfield House would tell us a little more.  According to the website British History online there is a letter there written in 1608 by Joan Baker to the Earl of Salisbury.  In it she apparently says that her husband Nicholas Baker of Thornbury is gravely ill and not expected to live.  Should she become a widow she would be left with five small children to support.  She requests that she be given the wardship of their son, John Baker, which would assist her to give a good upbringing and education to the children.  Nicholas died and was buried on 1st March 1608.

We do not yet know the outcome of this letter.  However we do know that John thrived, whoever his guardian was.  The south wall of St Mary’s Church in Thornbury has memorials to John Baker who died 14th February 1676 aged 80 years and his wife Jane who was buried on 20th October 1646.  The memorial mentions that they had thirteen children, eleven of whom survived her.

Henry Marsh – Henry is listed as the owner from 1626 to 1667.  We have various references to Henry Marsh being a tanner who lived in Kington.  Henry was listed as Mayor of Thornbury in 1632 and in 1655.  It is likely that the two Mayors were father and son.  The documents relating to Daggs indicate that by 1647 Henry was being referred to as Henry Marsh the elder and Henry Marsh the younger was also listed as a party to the agreements or leases.

We suspect that Henry the elder was the one who married Elizabeth Phillips in Thornbury on 1st February 1611.  Henry is referred to as a farmer in an indenture dated 1637 when he was a trustees of a different property.

The 1670 rent roll shows Henry jnr had the Bruern on the opposite side of St Mary Street and another tan house at the top of the High Street in the area of Daggs.  This was a fairly large property noted as being a burgage and three quarters of a burgage.  Henry married Joan Bird in 1643 and they had three children: Elizabeth, Henry and John. The records show Henry had other land totalling 6 burgages but we are not sure if these adjoined his land in the High Street or was elsewhere.  He also owned a property called The Corner House on the east side of the High Street on the junction with The Plain (now known as 1 The Plain).  Henry died in 1670.

Francis Fowler – the 1670 rent roll shows Francis was paying 6d for the Tan House (which was shown as having half a burgage of land).  Note that he was also listed against ‘the Cophall’ in Chipping Street (or Cobb Hall which later became part of 3 Silver Street) which was probably his home.  We know very little about Francis although we note that there is a reference to Francis Fowler a glovier of Thornbury who was a party to a feoffment in 1669.

The Webbs – the Mayors Accounts show that John Webb was paying the rent charge in 1685 and 1686 and Richard Webb in in 1692 and 1693.  In the years in between these periods, the accounts do not show any name, only referring to the payment for the Tanhouse.  There were several John and Richard Webbs in Thornbury around that time so we can’t be sure which ones were associated with the property.

Henry Marsh – another Henry Marsh listed as paying the rent charge from 1694 to 1709.  We believe that this Henry was the son of Henry Marsh junior mentioned above.  Henry married Elizabeth Thurston, the daughter of Robert Thurston in 1673.  He may have married again in 1681 to Mary Tanner, a widow.  Henry may be the one who was described in a feoffee document dated 1700 as being ‘a tanner of Chipping Sodbury’.  We also note there is a monumental inscription in St Marys Church for Henry Marsh of Morton, yeoman who died 21st September 1727 aged 75.

The Browns – the account books show that Thomas Brown was paying the rent charge in 1710 and 1711 and then Hester Brown from 1712 to 1738.  We don’t know much about the Browns.  Thomas and Hester appear to have had several children in Thornbury: Thomas was baptised on 24th January 1707, Margaret baptised on 22nd August 1708, Hester baptised on 12th February 1710, John Brown baptised on 7th November 1711 (who was buried on 10th October 1711) and Sarah baptised on 17th October 1712.  One of the baptisms noted that they were living in Oldbury.
Thomas was buried on 16th August 1712.  We don’t know how Thomas made his living so we are not sure whether they used the property as a dwelling house or as a place of business.

We are not sure when Hester moved away from Thornbury.  During the 1730’s she got into arrears in paying the rent charge – she was 10 years in arrears at one time and we note Thomas Brown, presumably her son, was listed as responsible for the payments during the last few years.  Both of them were living in Wheatenhurst in Gloucestershire in 1739 when they sold the property in St Mary Street to the Overseers of the Poor of Thornbury for £41.  Thomas was described as being a stationer.

The Overseers of the Poor bought this property and one adjoining it to enable them ‘to erect a Workhouse for the reception and setting on work the poor of the parish’.  Click here to read more about this Workhouse