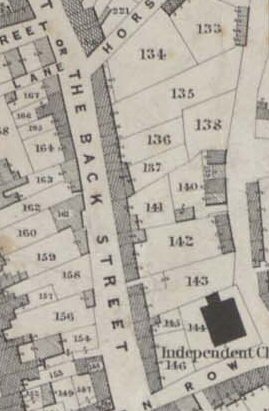 In the late 1830’s a survey of the area was made for the purpose of calculating the amount payable to the Manor in place of the tithe.  This survey provides the earliest plan of the area covered by St Mary Street and gives details of who owned and occupied the land, and its use at that time.  It was published in 1840 but seems to have taken two or three years to compile.  This means some information was out of date by the time it was published.

Plot 134 – house and garden owned and occupied by Mary Wilkes

Plot 136 – houses and gardens owned by George Cossham and occupied by John Birnall, one void, and John Davis

Plot 166 – house, slaughterhouse and garden owned by Corporation of Thornbury and occupied by Joseph Walker