Sport and Leisure in Thornbury

In researching the history of Thornbury we have come across snippets of information relating to various sports played in and around the town during the nineteenth and early twentieth centuries.  The clubs that were formed became a vital part of life in Thornbury as they are in most small towns.  Although the clubs were dominated by tradesmen, shopkeepers and schoolmasters they did offer some opportunities to meet a wider range of people from different levels in society.  They provided a chance to relax and have fun at a time when there were much fewer leisure activities than now.  In some cases they also provided the opportunity for young people to meet members of the opposite sex and many relationships must have been formed whilst serving refreshments or playing in mixed teams.

Most of the sports were played mainly by men, although there were opportunities for women to participate, particularly in bowls, tennis, golf, swimming and hockey.

In some cases, we have been lucky enough to acquire quite comprehensive histories of the way the sport was organised with mention of some of the major players; in other cases we have very little knowledge and would love to know more.

Bowls – the Thornbury Indoor Bowling Club was founded in 1980 using indoor bowling facilities at the Thornbury Leisure Centre.  However an earlier club, the Thornbury Bowling Club, had used an outdoor grass bowling green from around 1913 and the club continued until the mid 1950s.  Click here to read more

Cricket – Thornbury has a long and very distinguished history associated with cricket.

We were lucky to have found Les Summerfield, who for many years has been associated with the Cricket Club, both as a player and active committee member.  Les is now organising the archives of the club and adding memorabilia and records donated by others.  We are grateful to Les for sharing these records with us.  Click here to read more

It is interesting to see that the local ladies also played the game.  In 1898 here was a game played at the Thornbury Castle ground between a team captained by Miss H. Lloyd of Thornbury against a team captained by a lady from Clifton.  We assume that ‘H. Lloyd’ was Helen Margaret Lloyd the daughter of Henry Hume Lloyd.  Amongst the players of the Lloyd team were her sister Dorothy and ‘S’ Grace’ whom we assume was Sarah Martha Annie Grace, the daughter of Edward Mills Grace.  The scores were level after the first innings, but the Lloyd team were triumphant at the end, thanks to an early declaration by their opponents.

Football – note that newspaper reports mentioning a football team in Thornbury between 1881 and 1888 do not refer to what we now know as association football or soccer.  It was the game of rugby that was being played at that time, although the newspaper then called that game ‘football’.

Our earliest record of association football being played in Thornbury was a newspaper report dated 3rd March 1896.  This was a match against Yate.  Another report published on 5th September 1896 said that a public meeting has been held at the Church Institute with a view to forming a football club.  It mentioned that a club was already in existence but that it was restricted to members of the Working Men’s Club.  It was thought desirable to have a separate club in the town ‘not connected with anything’.

Officials of the new club were appointed: E. Stafford Howard as President, H. H. Lloyd as Vice President, H. P. Thurston as Chairman, the Rev M. Wade-Smith was Captain and R. Comely as Vice Captain, Hon. Secretary was E. J. Underhill and Hon. Treasurer was W. D. Canning.  The Rev Wade-Smith appeared to be the man responsible for the setting up of the team and when he moved away from Thornbury in 1899 it was said that ‘what their young men knew about association football was principally due to the careful training they had received from their captain’.

The history of the Thornbury Football Club was described in one the publications written by Wallace Phillips.  It was included in Wallace’s book ‘Thornbury (Pages from the Past)’ printed by F. Bailey & Son, 1977.  Copies are this book are held by Thornbury Library.  Click here to read about the article

Golf – the Thornbury Golf Centre at Marlwood was opened in 1992.  The buildings had previously been the site of Marlwood Farm.  Click here to see the Centre’s own website 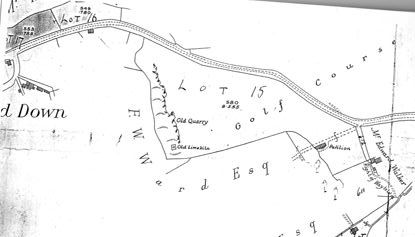 Victorian newspapers show that there had been golf matches involving teams from Thornbury in earlier years.  We have one report of a match between Thornbury and Henbury in 1894.  The ‘Gentlemen’ in the Thornbury team were Rev. E. Langley, Rev. J. E. Vernon, Hon. R. W. H. Rodney, Dr Irwin, Mr W. Robinson and Mr H. Child.  The ‘Ladies’ were Miss M. Grace, Miss Vernon, Miss G. Vernon and Miss Seymour.  The golf course was then situated at Lower Hazel.  In Edgar Mervyn Grace’s notes covering the early 1900s, he mentions that Lower Hazel was a nine hole course and he played there fairly often, reaching a handicap of 6.  We have been told that the course was divided by the little road running between Rudgeway and Old Down and that at least one hole had to be played by driving the ball across the road.  This required someone standing in the roadway making sure that there was no passers by when a shot was being played.

The image on the right above shows the golf course on both sides of the road.  The pavilion is also marked on the dotted track.  The plan was drawn up in 1928 for the sale of Thomas Crossman’s estate.

There was a planning application to convert the club house to residential use in 1928, but he Club seems to have survived for about 20 more years.  There is a reference on the Alveston page within Wikipedia that the Alveston Golf Club closed in 1948 and we understand the golf pavilion was sold to Tockington Manor School.  We’d love to hear from anyone with more information or photographs of the golf course.

Rugby – the present Thornbury Rugby Football Club was formed in 1963.  Click here to read the Club’s own website

We were surprised to find when looking through the Victorian newspapers several references to an earlier team playing rugby in the town in the 1880s and we were thrilled to be given a copy of an early photograph of that team.  See above.  We have identified in the back row William Penduck sixth from the left, John Evomy Phelps, seventh from the left and Henry Privett Thurston on the right.  The name of ‘A. E. Pitcher’ was written on the back of the photo but he would have been too young to have been in the photo (only being born in 1878).

In the newspapers the game was referred to as ‘football’ but it was clearly being played under rules similar to what we know as rugby today.  This early rugby club didn’t survive long and was replaced by a club playing soccer.  The Secretary of the present Thornbury Rugby Football Club, Dave Fox, a real rugby enthusiast, will be publishing a book on the history of the Club.  He has kindly given us permission to use an extract of this book covering the earlier history which includes details of how the game was played in those days.  Please contact the Club if you would like to know more about the book.  Read Dave’s account of the early history

Swimming – Thornbury has had an indoor swimming pool at the Leisure Centre since 1980 and another pool in the Castle School.

Swimming has however been a popular activity for locals for a long time.  There are various accounts in the nineteenth century of locals going to swim in the river at Littleton or Oldbury Pill.  It is difficult to imagine when one sees the dangerous muddy banks of the river and the notorious tides.  A public bath was available in the Town from before 1840 and this was used by the public and school until the 1950s.  When this closed the nearest swimming pool was the outdoor pool known as the Blue Lagoon in Severn Beach and the indoor public baths at Horfield.  Click here to read about the history of swimming

Tennis – tennis has been played in Thornbury from the nineteenth century onwards.  The earliest form of tennis was the one now known as ‘real tennis’ which was played in an enclosed room built into in the walls of Thornbury Castle.  The Thornbury Tennis Club was formed about 1911 on outdoor courts located at the bottom of the field now known as The Mundy Playing fields and where the tennis club still has its courts.  From around 1925 tennis was also played at the Grammar School and several of the larger houses in the area were equipped with tennis courts.   Click here to read more