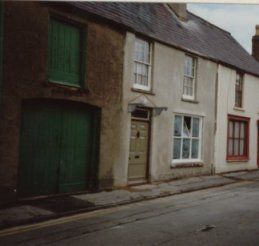 After the death of William Knapp in 1862, his blacksmith shop in Thornbury was converted into two houses which became 1 and 3 St John Street.  The rest became part of The Georgian House.  This is illustrated more understandably in the photograph on the right, taken in 1981, in which what is now 1A St John Street was still part of the Georgian House and was a “tallot” or loft over a garage doorway, but numbers 1 and 3 are separate residences, although the roofline and frontage are continuous.

The Walkers
The 1867 Rate Book and the 1871 census show 1 St John Street occupied by Hester Walker a widow (retired butcher’s wife) aged 65 from Hill, her son, Henry, an unmarried billposter aged 43 and a lodger Charles E Heaven, a railway contractors timekeeper aged 23 from Wotton Under Edge.

Hester was born in Hill about 1805, the daughter of James Prewett, a coach proprietor and his wife, Hester.  She married Joseph Walker, a butcher and they had several children including Louisa baptised 7th November 1824, Joseph baptised 10 September 1826 and Henry and Charles, twins baptised 12th February 1828.  Little Charles died after just 7 weeks and they had another son named Charles baptised on 5th September 1830, William baptised on 26th August 1832, (who died after 8 months), William Prewett Walker baptised on 4th September 1836 and Ann baptised 16th October 1839.  Joseph died and was buried on 13th August 1839 aged 35 years.

In the 1841 census Hester was living in Back Street (in the house which later became known as 8 St Mary Street).  She was working as a butcher and living with Louisa, a corset maker and Joseph an apprentice shoemaker and William and Ann.

In January 1841 a report appeared in the newspaper suggesting that young Joseph had been involved in a trifling quarrel with a group of other boys and shot Thomas Williams, aged 9.  Thomas was the grandson of Mark Williams, the blacksmith.  The report suggested that an inquest had returned a verdict of manslaughter.  The report said that Joseph had returned home and told his mother that he had murdered a boy and should be hung for it.  Joseph was described as being 15 years old, of small stature, has dark eyes and stammers in speech.  A week later the newspaper printed a correction saying that there were no grounds for saying that Joseph had wilfully discharged the gun and it was a pure accident.  The jury had returned a verdict of homicide by misadventure.  The paper noted that ‘The boy, Walker, bears a good character’.

Shortly after the census in 1841 Hester had moved away and the 1851 census shows Hester had gone back to live with her parents, James and Hester Prewett in the High Street.  She was working as a needle woman.

The 1861 census shows Hester was a schoolmistress then living in 4 Horseshoe Lane with her son, Henry, an agricultural labourer and 4 boarders.  Henry died in 1874 aged 46. The 1867 Rate Book, the 1871 census and the 1876 Rate Book show that Hester was living in 1 St John Street.  By 1881 Hester had moved to 6 St Mary Street where she had two lodgers and she was listed as living there in the 1885 Rate Book.  In 1891 she was living in 10 Upper Bath Road with her nephew Charles and Elizabeth Prewett.  She died and was buried on 25th January 1893 aged 89 years.

Walter was baptised on 21 April 1848.  He was the son of Lewis Davis, a painter and his wife, Eliza.  Lewis came from Wickwar to live in Thornbury before 1848 when their son, Walter was born there.  In 1851 Lewis was a plasterer and tiler living with Eliza in 21 St John Street with his brothers, Albert and Worthy, and with their son, Walter.  By 1861 Lewis and his family had moved to one of the Stokefield Cottages in Castle Street – Eliza’s widowed mother, Hannah Franklin was living with them.  Eliza died in 1864 and Lewis died in 1870 aged 54.  By 1871 Walter had become a journeyman painter and he was living with his grandmother in Castle Street.

Walter married Eunice Powell in December quarter 1877.  Eunice was born in Alveston about 1847.  In 1851 she was living with her parents on Alveston Down – they were Samuel a shoemaker from Cam, and Caroline – interestingly her name was spelt clearly as ‘Unis’.  The 1871 census shows her mother, Caroline, had re-married to George Smart, an agricultural labourer.

By the 1891 census, they had three more children: Walter William born in 1883 (when his mother’s name was spelt Unise), Mary Ann born in 1885 and Albert Davis born in 1891.  They were still living at 1 St John Street.  The 1899 Rate Book shows that Alfred Sealy had taken over ownership of the house but Walter Davis continued to live there.  On 24th August 1894 property included in the estate of Mark Crossman Meredith was advertised for sale by auction on September 4th of that year.  The tenant of 1 St John Street was said to be Walter Davis.

Walter died on 10th January 1901 aged 52 and he is buried in Thornbury Cemetery.  In the 1901 census, Eunice was living in the house with children, Walter, Mary Ann and Albert.  Her son, Walter had become a house painter like his father and grandfather. The 1905 Rate Book shows that Eunice Davis continued to rent the house from Mary Sealy.  It is not clear why the owner has changed because Alfred Sealy was still alive at this time.  By the 1910 Rate Book Eunice and Mary had moved to number 7 Pullins Green.

Miss Higgins remembers that they lived at 7 Pullins Green.  The Rate Book of 1910 shows that Eunice Davis was the tenant.  The 1911 census shows Eunice was a widowed dressmaker aged 60.  She was living at 7 Pullins Green with her daughter, Ann Davis, a dressmaker aged 22 and son, Albert, a shop assistant aged 20.  Eunice is listed as a dressmaker living in St John Street in the 1916 Prewett’s Street Directory.  Eunice and Mary were listed in the 1918 electoral register.

Eunice died aged 73 and was buried in Thornbury Cemetery on 9th April 1920.  The 1926 Rate Book shows Mary Ann Davis as the occupant of 7 Pullins Green.

Richard Collins
The Rate Book of 1910 shows that Richard Collins was the occupant and tenant of the house.  The 1911 census shows that Richard James Collins was a foreman tailor aged 32 from Frome.  He was living with his wife, Lilian Ellen aged 30 from Dursley and their three sons: Edward James aged 9 (born on 12th July 1901), Robert Austin aged 6 (born on 14th December 1904), both born in Dursley and Richard John aged 1 born in Bedford.

Richard was born in the district of Frome in the March quarter of 1879.  In 1881 he was living with his grandparents Richard and Lydia in Frome.  In 1891 he was one of three children living with his widowed mother Jane who was a tailoress in Frome.  Jane’s unmarried sister Elizabeth Longman aged 45 also lived in the household.  He married Lilian Ellen Workman in the Dursley area in 1900.  Lilian was born in 1880, the daughter of John Workman, a boot and shoe maker and his wife, Jane (nee Webb).  In the 1891 census the Workman family were living at Silver Street in Dursley.

The 1901 census shows Richard was a journeyman tailor living in Hill Road, Dursley with his wife, Lilian Ellen.  The records of the Council School suggest that the family moved to Thornbury in 1909.  Their son, Edward James moved to the school from the Frome Council School.  We understand that Richard worked as a tailor ‘in a shop in Gloucester Road’.  This was presumably John Williams’s business located at Gloucester House, 2 Gloucester Road. The 1913 Electoral Register shows that he was still living in St John Street at this time.  The photo on the right shows Richard John (Dick) when he was at the Council Infants School class 3 in 1914.  (Dick returned on a visit to Thornbury in 1979 and the class photo was published in the Thornbury Gazette).  The Council School records show that the family left the district in 1914.  We understand that the family moved to Aylesbury in Buckinghamshire.

Richard died aged only 42 and his death was registered in the Wisbech area in the December quarter 1921.  Lilian married again in Wisbech in 1926.  Her second husband was Herbert Negus.

The Sealy family – from as early as 1899, the house was owned and then occupied by Alfred William Sealy.  The family did not sell the house until 1988 when his third wife died.  Click here to read more

In the 1980s the house was bought by Donald and Helen Sparling.  At the time there was just a single tap in the house located in the washroom.  They made considerable changes to the house to bring it up to modern standards.  A collection of photos taken by them at the time the work was carried out is shown on the bottom of the main page for this house.  Click on the button below to go to that page.