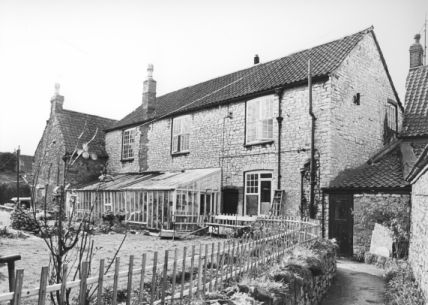 The house once known as number 2 St John Street has long since gone, having been demolished in 1982 to make way for Quaker Court sheltered housing.

It was accessed from St John Street down a lane running between the rear access to the Plough Inn and Trayhurn’s slaughterhouse in St John Street.  The building backed directly onto the garage built by Edmund Cullimore in St Mary Street, but as far as we know there was no direct access to St Mary Street. 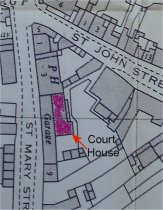 We don’t have a full history of the building, but we know that the building was very old.  The 1840 Tithe Survey shows the building as part of the property owned by the Board of Guardians of the Thornbury Union.  It was part of a block of buildings used by the old Corporation of Thornbury for community use.  We know that parts of these buildings once accommodated a school, the workhouse, the police station and almshouses.

It is interesting to note that we have found no reference yet to the building actually being used as a ‘court house’ although it is very likely that it was associated with its use by the Corporation.  The name, ‘The Court House’, does not appear in any of the records until the house was taken over by the Trayhurn family in the 1900’s.

The Workhouse – we don’t know much about the earlier workhouse before it was moved to the new building in Gloucester Road about 1840.  We have a copy of an indenture dated 1739 which refers to two purchases of adjoining messuages and adjoining garden and orchards in St Mary Street ‘for the erection of a workhouse for the reception and setting on work the poor of the parish’.  One messuage was bought for £41 from Esther and Thomas Browne of Wheatenhurst.  This messuage was the old tan house which had belonged to Katherine Rippe.  The second messuage cost £90 and was for a building adjoining the first building on the north end and previously owned by a Thomas Lewis from Kingswood in Wiltshire.  We believe that this messuage might have been the building later known as The Court House.  Unfortunately we don’t know anything about the earlier history of this building.

Click here to read more about the old Workhouse

Abraham Cole – on 4th December 1840 the Guardians sold the property to Abraham Cole.  He paid £425.  The property was described as being ‘All that large house lately used as a Workhouse with outhouse yard and garden adjoining’.  We feel it likely therefore that the Court House was indeed part of the old Workhouse building, possibly used in some way in conjunction with the old building which later became known as the Malthouse and in the 1960’s used as a garage by Thornbury Motors (see plan above).

Even before 1840 Abraham was already living in Thornbury was in business as a maltster.  The 1840 Tithe Survey shows he used a Malthouse on the western side of St Mary Street and part of the property which later became known as The Royal George.

The 1841 census shows Abraham was a maltster living in St John Street with his wife, Elizabeth and their children.  The 1851 census shows he was a maltster employing two men and that Elizabeth was aged 38 and born in Tytherington.  He continued to live and trade from the property in St John Street and he appears to have made full use of the buildings he acquired.  The 1859 Rate Book shows that Abraham owned a ‘Brewery’ in St John Street (which we assume to be somewhere on the site he had acquired in 1840).  The Brewery was being occupied in 1859 by John Shepherd.

In 1859 Abraham took over two other adjoining plots, one used as a beerhouse (which later became known as The Plough) and the other as butchers shop and house on the corner of St Mary Street and St John Street.  Click here to read about Abraham

Abraham died in 1883.  It took a long time before Abraham Cole’s trustees disposed of his property.  On 14th and 15th June 1910 the Trustees put up his property for sale at auction.   There were 16 separate lots to be disposed of.  Lot 13 related to The Court House and the adjoining Malthouse.  It was described to ‘All that Freehold Block of Buildings with frontages to St Mary Street and St John Street.  Part of the buildings were formerly used for Malting purposes and are now warehouses. (We believe this refers to the buildings which were later used by Thornbury Motor Company).  The accommodation includes ‘four bedrooms, box room, landing, two lofty front rooms, kitchen, pump and cistern.  There were two large store rooms on the base with five good-sized lofts over.  The outbuildings comprised two stall stable, two loose boxes, harness room, cart shed, hay and straw shed and stone-built shed formerly used as malt-kiln together with a warm productive garden’.  (This part we believe refers to the Court House and its outbuildings).

Henry W J Carter – the 1885 Rate Book shows that Henry occupied The Court House renting it from the Trustees of the late Abraham Cole.  We are not sure where he is in the 1890 Rate Book as he is listed in both The Court House and The Georgian House.  In the 1891 census describes him as living in one of these properties (we are still not sure which) as a timber merchant.  Click here to read more

George Hughes – the 1894 Rate Book shows that George was now renting the property from the Trustees.  The 1899 Kelly’s Trade Directory confirms this by giving George’s address as ‘Court House, St John Street’.  The 1901 census shows George was a carriage proprietor.  He was still living there according to the 1905 Rate Book.  He died in 1906.  Click here to read more about George

The 1907 Rate Book shows the property was unoccupied.

The Trayhurns – on 28th September 1910 Elizabeth Trayhurn and two of her sons, Henry Trayhurn and Albert Edward Trayhurn, bought The Court House and the Malthouse now used as warehouses.  At the time of the purchase, Elizabeth was shown as being the occupant of the premises or her under-tenants, and the warehouses were occupied by Edwin William Savery and Francis Williams.  The Trayhurns also bought the adjoining butchers shop, house, and premises which Elizabeth had been occupying since about 1891.  They paid £1050 for all the property.

The Court House continued in the ownership of the Trayhurn family until 1976.  On 16th December 1976 the Trayhurn Brothers sold all its property adjoining St John Street and St Mary Street to Northavon District Council for £43,500.  This included the butcher’s shop, the slaughterhouse, the Court House and garage.  At the time of the sale the Court House was occupied by Phillip Dagger at a weekly rent of £8.  Click here to read more about the Trayhurns

The buildings were finally demolished in 1982 and replaced by the Quaker Court elderly persons dwelling.

Local historian, Tom Crowe did a brief survey of the building before it was demolished in 1982.  He noted that:

“the building is of one period.  The windows have not been inserted.  The material appears to be all of white limestone, except the relieving arch over the door in the photograph is of brick, and the flue, inserted later, is also in-filled with brick.  The relieving arches over the down stairs window are of white limestone.  The roof does not overhang the gable ends, there are no barge boards and therefore the Higgins ante fix could not have come from here- moreover, the roof angle is around 95 degrees, the slots in the ante fix would fit a 72 degree included angle roof.

The outer wall of the “old court” was thick and had splayed window openings (like arrow slits of a castle).  The cistern under the whole building was a brick arched construction and had a water level of about 4 feet 6 inches.

It is thought to be 60 feet long and 18 feet wide inside the walls.  Partitions upstairs were all framed and single plank.  Partition between the kitchen and the “cold store” was lathe and plaster.  Kitchen/lounge diner wall single brick. Lounge diner entrance hall wall was single brick”.

The last tenant of the property, Phillip Dagger told Tom Crowe that he remembered ‘an historian’ visited the site in about 1976 with a view to getting it listed.  Phillip replaced a window and had to “restore” it at the insistence of the “planners”.  However when Northavon District Council purchased the building from the Trayhurn’s executors, they allowed it to fall into disrepair and it was eventually considered that it had to be demolished.