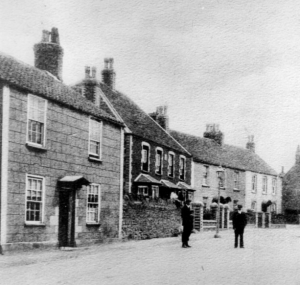 On the left we have a photograph of number 21 St John Street in Thornbury (the house on the extreme left of the photograph) as it looked around 1900.  Click here to see how it looks at the present day

Deeds of the property are held at Thornbury Museum and Gloucester Records Office, and they show that the house was owned by the following people:

A document dated 25th March 1812 shows that a mortgage was arranged with John Birt of Thornbury, innkeeper and Samuel Thomas of Thornbury, a yeoman, enabling John Niblett to purchase the property for £160.

John Neale – a family tree on the Ancestry website says that John was born in Berkeley 1742 and was baptised there aged one year on 13th January 1743.  Scribe’s Alcove says that he is the son of George Neale.  He is said to have married Hannah Harding on 4th March 1767.  However we are unconvinced about this marriage as John was described as a widower when he married Hannah Harding and we cannot yet trace a likely earlier marriage.
John Neale died on 14th October 1832.  His will was proved on 4th February 1833 by the oath of George Parker of Thornbury who declared that this was the true last will and testament of John Neale gentleman late of Thornbury and that he George William Parker a plumber was the sole executor of the will.

John Neale gave and devised the property described as “in which I now dwell” to George William Parker, late of Thornbury plumber and glazier, now of Dursley, and his wife, Mary. Mary also received £10.

George William Parker – George acquired 21 St John Street in 1832 in accordance with the will of John Neale, the previous owner.  He sold the property on 25th March 1834.

At the time George had already moved to Dursley.  George was a plumber and glazier. Later census records show George was born about 1809 in Westerleigh.   A family tree on the Ancestry website suggests George was baptised on 17th May 1808 the son of William Parker and his wife, Frances Wright.

The land tax records from 1826 through to 1832 show George as a tenant at 39 High Street.  He acquired the house in St John Street in 1832/3.  On 16th April 1833, George appears to have raised a loan of £100 using the house as security.  On 25th March 1834, George sold the house to Charles Hopton a labourer of Thornbury who was already occupying the house.  The loan was paid off by the sale of the house to Charles.  At the time of the sale George and Mary were living in Dursley.

The 1841 census shows the family living in Chancery Building, High Street Wickwar.  George was a plumber.  They had two children Edward aged 4 and Mary Jane aged 2.  The family were living in the High Street of Wickwar in the 1851 census then with children, Jane aged 12, Lucy aged 9 and Richard aged 2.  By the time of the 1861 census they had moved to Haw Street, Wotton Under Edge.  They were living there with their son, Edward now a plumber aged 23, Mary Jane aged 22, Lucy aged 18 and George aged 12. George was aged 60 and was still a plumber.  His wife Mary was 54. Both were said to have been born in Westerleigh.  George died on 8th August 1883 aged 75.

Charles Hopton – Charles bought the property on 25th March 1834 when he was already occupying it.  The property was conveyed to Luke Prosser on 30th August 1841.  Click here to read more

Luke Prosser – in the 1841 census Luke Prosser lived in Buckover with his wife Ann.  Their ages are shown as 75 in this census.  Luke acquired the property on 30 August 1841 when the previous owner, Charles Hopton, defaulted on the loan of £140.  Of this £140, Luke himself had borrowed £70 from John Smith, a maltster from Tytherington.  On 30th April 1842, the property became vested in John Smith because Luke’s outstanding debt to John Smith had not been be paid.  In August 1842 he made a will leaving the property to his daughter, Ann White and her husband, Charles White of Buckover, tiler and plasterer and he died shortly afterwards.  At this time, the house was occupied by John Thurston as tenant.

Charles and Ann inherited the property from Ann’s father, Luke Prosser, in 1842 following his death, subject to their repayment of his loan of £70 from John Smith.  They never occupied the house, letting it out instead to Lewis Davis.  It is possible that Lewis may have been related as both he and Charles White came from Wickwar and Charles White named his first son, Lewis.

On 26th August 1851 Charles and Ann sold the property to George Wiltshire, a mason from Thornbury.  The proceeds of the sale were used to clear the debt owing to John Smith.  By 1871 they had moved to a house in Grovesend – their widowed son, George and his three children were living with them.  By 1891, Charles and Ann were living on their own in their three roomed house in Grovesend.  Ann and Charles both died in January 1892, Ann aged 82 years and Charles aged 86 years.  They were buried on 18 January and 27 January respectively.

George Wiltshire – George was the son of William Wiltshire, a mason and his wife, Mary.  He was baptised in Thornbury on 9 July 1815.  George never married – in the 1841 and 1851 censuses he was a mason lodging with William Alloway who was living at 19 St John Street.

On 30 August 1851 George Wiltshire borrowed £50 from Luke Withers using the house as security.  By 20th January 1860, although George had paid the interest to the loan, he had still not been able to repay the £50.  George borrowed £60 from John Horatio Thurston, gentleman from Kington and used this to pay off his original debt to Luke Withers leaving him with £10 to meet other requirements.  At this time, George Wiltshire was living in the house.  The 1861 census shows George as a stonemason living on his own in number 21 St John Street.  On 25th March 1865 George Wiltshire had paid the interest owing to John Horatio Thurston but had not repaid the capitol sum of £60.  He contracted with Thomas Wilson, beerhouse keeper of Thornbury for the purchase of the property for £130.  Of this sum, £60 was paid to John Horatio Thurston to clear the loan and the remaining £70 went to George Wiltshire.  George died in 1870 aged 55 years.  He was buried on 7th April at St Mary’s Church in Thornbury.

Thomas Wilson –  in 1865, Thomas purchased number 21 St John Street from George Wiltshire at a cost of £130.  He never lived the house, continuing to live St Mary Street, and allowing the house in St John Street to be let to tenants.

The 1876 Rate Book shows that Thomas Wilson owned the house which was then being rented to James Underhill.  By his will dated 2 January 1880, Thomas Wilson, described as a grocer and beer house keeper, bequeathed his estate to his wife, Anna Maria.  The 1880 Rate Book shows that Thomas Wilson is the owner of the house.  Thomas died on 4th January 1882 aged 51 years.  The Rate Book of 1885 shows that Mrs Wilson became the owner.
Anna Maria Wilson died on 16 November 1885 aged 54 years.  Her will was proved by George Wilson, her brother-in-law and Thomas Honeyborne on 9th February 1886.   The Rate Books of 1890 and 1894 show that the owners of the house are the Trustees of Mrs Wilson.  Thomas sold the house on 25 March 1896 for £212 10s to Albert Edward Bevan, a boot and shoe maker from Thornbury.   Click here to read about Thomas 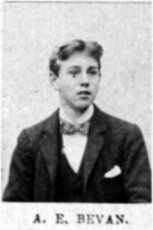 Albert Edward Bevan – Albert was born in Thornbury in September quarter 1878.  He was the son of James Bevan, boot and shoe maker from Thornbury and his wife, Ann from Pedington near Berkeley.  James had his shop on The Plain and the family were living there in 1891.

On 25 March 1896, when Albert was just 18, his father bought him a house, 21 St John Street.  The house was to belong to Albert, but James Bevan paid £212 10s for the property from Thomas Honeybourne, the trustee for the estate of Anna Maria Wilson.

It does not appear that Albert ever lived in the house.  At the time of the purchase, the indenture mentions it was occupied by ‘Representatives of the late Joseph Stevens’.  It is interesting to note that on 26 March 1896, the day after the purchase, Albert borrowed the sum of £150 from Frederick Jones with James Bevan acting as guarantor.  The Rate Book shows the owner of the house as James Bevan.  This is presumably because Albert Bevan is still not of full age.  However it does not explain why the 1905 and 1910 Rate Books still say that James Bevan is the owner.  Perhaps James Bevan was paying the rates for his son.

A report in the Bristol Mercury dated 20th May 1899 shows that Albert had for many years been the accompanist for the Gleeman, a popular choral society in the Town.  The article mentions that he was about to leave the group and the Town, going to the Conservatoire in Berlin to continue his studies.  He was presented with a travelling case and an illuminated and framed address signed by the members of the Society of Gleemen.   The 1901 census shows Albert at home with his parents on The Plain, but he is still being described as a musical student.

On 1 September 1908, Albert, now a teacher of music and living in Maida Vale, London, repaid the loan relating to 21 St John Street in full to Frederick Jones.  We do not know where Albert taught music but an article in the Beacon (an American newspaper for the blind) referred to Albert Edward Bevan as a music master at Christ College.  The 1911 census shows Albert living in Portsdown Road in London.  His occupation was said to be “Musician (pianist)”.  His wife was not at home in the census but his widowed mother in law Louisa Anderson was living in the household.

During the First World War he appears to have been living in London although his application for exemption from service in the war gave his address in Thornbury and said that his occupation was a boot and shoe manufacturer.  A personal letter amongst the exemption papers held by Gloucestershire Archives is addressed to Mr H P Thurston and appears to invite Lawrence Thurston  to London which implies that Albert was actually in London at that time.

On 4th June 1926, Albert Edward Bevan sold 21 St John Street to Miss Elizabeth Grace for £350.  On 3rd June 1931 Albert sold the Oxhouse cottages to Frederick James Bishop for £150.  Albert died at 55a Portsdown Road in Maida Vale on 15th June 1936 aged 57.  Albert’s widow, Kate Elizabeth, returned to Thornbury by 1946 when she was living at Auklands in the Gloucester Road.  She stayed there until the 1960’s.  In the 1965 electoral register she is listed as being at Thornbury Hospital.

Elizabeth Haley (nee Grace) – Elizabeth was the daughter of Frances Henry Grace and his wife, Elizabeth.  She acquired the ownership of 21 St John Street for £350 when she bought the property from Albert Edward Bevan.  She married Dennis Haley who was a pilot officer in the RAF and after the War we understand he took over the management of the Saw Mills.  She continued to own the property, although she never lived there until at least 1963.  During this period it was let out to Charles Staite, an employee of the Saw Mills.

About 2003 the house was bought by Brian and Jeanette Cason and merged with number 19 next door into one house.