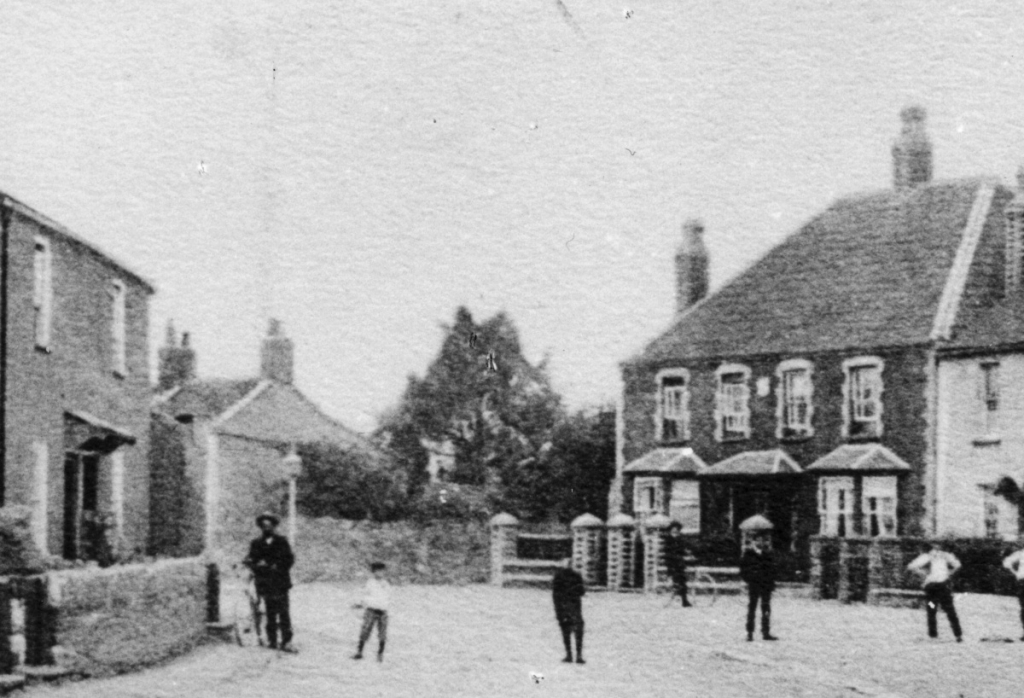 This property has gone through four distinct phases: initially garden land, it became a gas and electric showroom, then used as a hair and beauty salon and finally converted into apartments:

Garden land
The land on which number 23 was built was originally a piece of garden land attached to the house which became known as number 1 Saw Mill Lane.  On the 1840 Tithe Survey this house and garden were owned by George Taylor and occupied by Jane Hopkins.  Click here to read more

The photograph above was taken around 1905.  Taken from Pullins Green it shows the large gap between the properties in St John Street and those in Pullins Green.

Gas & Electric Showroom
In 1932 plans were submitted by Walter Pitcher and Sons, the builders for a new showroom for the Thornbury Gas Company.  The original plans shown in the plans were for a single story showroom.  We are not sure whether the showroom was ever built in this form or if it was built as the two storey premises which we see today.  Click here to read about how gas was introduced to Thornbury. 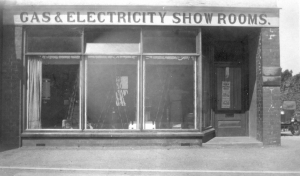 The photograph on the right was probably taken in 1934 or 1935 as the posters on the door are advertising two films being shown at The Picture House in Thornbury; “Little Friend ” and “Song at Eventide” and both of these films were made in 1934.  Outside on the brick wall next to the door are two brass plaques which appear to be those that a registered company had to have.  Two plaques were necessary because at this period the Trade Directories show two companies; the Electric Light and Power Company and the Gas Light and Coke Co Ltd.  Francis Grace was official secretary to both.

We know that the rooms above the showroom was used as a flat let out to tenants.  In 1946 this was occupied by Harold and Olive Davenport.  In 1954 Harold Henry Moss and his wife Brenda were tenants and they were still living there in 1958 when the building was put up for auction by the Trustees of Edmund Cullimore’s estate.  In the auction, the property is described as:

‘A valuable corner Showroom with Flat over.  The front showroom is let to the Gas Board on an annual tenancy at a rental of £39 per annum, the tenant paying rates, but the office at the rear is in hand.  The Flat over comprises front sitting room, living room, front bedroom, kitchen with sink and built-in cupboards and bathroom off, fitted bath, wash-basin and gas geyser.  W.C. on ground floor.  All main services connected.  It is let to Mr B. Moss at a rental of 15/- per week inclusive.  Rateable value £19 Flat, £10 Offices and Premises.’  The property was bought by John Fred Wallace Rowe, who was married to Edmund’s grand-daughter, Ruth Grace.

By 1965 the Mosses had moved to 3 Pullins Green, and there is no record of anyone living in the flat.

For more than forty years these premises were a hair and beauty salon and known for much of that time as “Adrian’s Hair Fashions.”  Thornbury Museum has a record of a sign that indicates that by the 23rd January 1965 the occupier or manager of the business was “G.R. Reeves. ”  We believe that this was Gwendoline R Reeves (nee Pinsent) who married William F Reeves in the September quarter of 1942 in Bristol.  Their son Alan was born in Bristol in 1943 and their daughter Lynn was also born there in 1953.  By 1961 William and Gwendoline Reeves lived in Blakes Road in Thornbury. 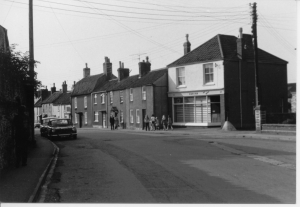 We have been told that the business was called Adrian’s by their son Alan.  Apparently it was thought that “Adrian” sounded more suitable.  We know from records held at Thornbury Museum that A.G and J A  Reeves had taken over the business by the early 1980’s.  We believe that this was Alan and his wife Jennifer Reeves (nee Taylor).

The salon kept the name of Adrian’s although the ownership of the business  changed and it was operated by Paula Wintour until December 2011.  Paula moved the business down to her home in Severnview Road when the owners of the property the Rowe family decided to convert the premises into a residential one and to build a separate house on the site of the former 1 Saw Mill Lane.

The photograph on the left was taken about 1971 showing number 23 being used as Adrian’s Hair and Beauty salon.

After lying empty for 18 months, work began in late Summer 2013 to convert the property for residential use.  This involved the removal of the shop frontage which had been there since the building was first erected and conversion into two apartments.  The first occupants moved in in September 2014.  An additional unit was built at the end of garden, accessed from Saw Mill Lane.  Click on the thumbnail on the right to see a photo of the new houses.