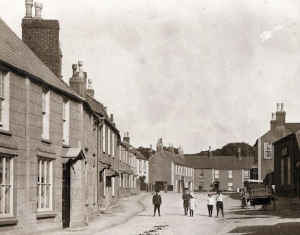 Prior to 1862, the house was part of William Knapp‘s blacksmith’s shop.  We believe it was probably converted into houses following William Knapp’s death in 1862 by Mark Crossman Meredith.

Alfred Harvey – the 1867 Rate Book shows Alfred in what we believe to be 3 St John Street.  We suspect that Alfred was the same person who been living at 42 Castle Street. Click here to read more

In the 1871 census the house appears to be vacant.

John Knapp – the 1876 Rate Book shows that John Knapp was a tenant of the house.  We are unsure which John Knapp this was.

The Grahams – in 1881 the house was occupied by William Richmond Graham, a boot and shoe dealer aged 34 from Keekirk in Scotland and his wife, Elizabeth aged 39 from Falfield.  William had married Elizabeth Kendall in Bristol in September quarter 1870.

William died in 1882 aged 35 years.  In 1884 Elizabeth was convicted at the Petty Sessional Court on 6th February of causing ‘filth’ to be deposited in St John Street on 24th January 1884.  She was fined one shilling or one day’s imprisonment if she refused or could not pay the fine.

The 1885 Rate Book confirms that the tenancy has changed from William Graham to his wife Elizabeth.  In 1891 Census Elizabeth was still living in 3 St John Street – she is now shown as a boot and shoe dealer and her son, William, is now a ‘traveller’ aged 19.

It is interesting to note that Elizabeth Graham appears in the Electoral Register of 1896.  As a woman she could not vote in the parliamentary elections, but as a head of household she could vote in the council elections.  Her son, John Kendall died in 1898 aged 18 years.  He was buried in Thornbury Cemetery on 29th May 1898.

In 1895 the house was put up for sale by auction because of the death of its owner, Mark Crossman Meredith, but the tenant of the house was still described as Mrs E Graham.

Elizabeth was still listed in the 1899 directory as a boot and shoe dealer, but by 1901 she and the family had moved away from Thornbury.  She was now living in 30 Upper Cheltenham Place, St Andrews, Bristol.  Of the children who were still living with her: William was a motor driver, Thomas had become a postman, Janet was a domestic and Ernest a mercantile clerk.  Elizabeth had one grand-daughter living with her, a Nelly M Hemmings aged 10 months.  Florence Elizabeth had married Frederick Kemball in Bristol in 1900.

Alfred Sealy – in 1899 the tenant who rented the house from Mrs Meredith was Alfred Sealy.  This name is crossed out which indicates that he moved from the house in that year.  Alfred W Sealy owned the house next door (number 1).  Read more about Alfred Sealy

Charles Reeves – was shown as the tenant of this house in the 1905 Rate Book.  Click here to read more

Reginald Higgins – the 1907 Rate Book lists Reginald as the tenant of Mrs Sealey.  We don’t know any more about him.

Edward Harman – in 1910 the name appears to be ‘Harman’ which is written next to the name of Sidney Screen which implies that this family moved in after Sidney Screen.  The 1911 census shows that it was Edward Harman, a confectioner aged 42 from Hastings.  He was living here with his wife, Ada who was aged 40 and also born in Hastings and their daughter, Lilian Kathleen, a dressmaker aged 17 born in Swindon.  Edward had married Ada Golding in Hastings in 1892.

In the 1901 census Edward was a pastry cook and baker living with Ada, his sister, Annie and daughter his daughter, Lilian aged 7 in St Margarets Road, Swindon.  The 1915 and 1916 Prewettt’s Directories show Edward was still living in ‘John Street’.  In the 1921 electoral register Edward was living somewhere on the High Street in Thornbury.  He had moved away by the time of the 1927 electoral register.

Mary Taylor – the 1925 Valuation List and 1926 Rate Book show the house was occupied by Mary Taylor.

Arthur Cripps was the son of Henry Cripps, a farm bailiff and his wife, Susannah.  Arthur was born in Duns Abbotts near Cirencester in 1866.  He married Maria Moore in the Barton Regis district of Bristol in June quarter 1889.  Maria had been born in Knowle near Bridgewater in Somerset on 23rd December 1866.  We don’t know her parents.  In the 1881 census Maria was a general servant living in Church Street, Bridgewater.  This census indicates she was born in Bawdrip.

The family moved to Rockhampton about 1893 where Arthur was a market gardener.  Two more children were born here: Arthur Charles born in Rockhampton on 4th March 1894 and Ethel Maggie born in Rockhampton on 4th September 1896.  The family appears to have moved from Rockhampton to Thornbury around January 1899 when the children started at the National School (now St Mary’s Primary).  Their address at that time was the High Street and the 1899 Rate Book shows Arthur was living at 32 High Street which he was renting from Samuel Pegg.  They had moved to run The Plough Inn in St Mary Street by the census of 1901.

Some of Arthur’s siblings seemed to help in running the pub and bringing up the children.  In 1903 when Maggie started at the Council Upper School, Charles Cripps, presumably Arthur’s older brother, was shown as being her guardian.  Arthur died on 11 March 1905 aged 38 years so perhaps he had been in ill health for some time.

Following Arthur’s death, the Trade Directories show that The Plough was taken over by Escott Frederick Cripps, one of Arthur’s younger brothers.  Escott is shown to be living in the Plough in the 1910 and 1918 electoral registers and the 1914 Trade Directory.

On 17th November 1915 Frederick Escott Cripps enlisted for the army and he appears to have been assigned to the 2nd Durham Light Infantry.  We have no further information about his military career.

However from 1923 onwards until 1935 it was Mrs Maria Cripps who is shown as running the Plough.  The 1935 Electoral Register shows that Maria moved from The Plough to number 3 St John Street where she was living with her daughter, Ethel Maria.  We know that one of her other daughters, Dorothy Mabel, married in 1911.  Her husband was Sidney George Gordon Wilkins, assistant innkeeper of Tockington.

Emily Jane Grant was recorded as living there when she died in Thornbury Hospital on 7th February 1956.  She was aged 83.  The house seems to have been unoccupied in the 1965 Electoral Register and in 1970 it was occupied by George R. Saunders.  We have also been told that this house was occupied by a teacher called Paul Hett and his wife in the 1970s.  We would like to hear from anyone who can tell us more about this house and the people who lived here.

go to the history of the house
Toggle Sliding Bar Area