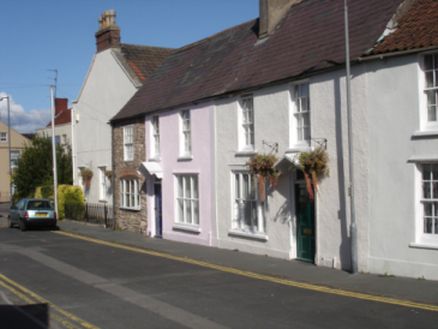 We believe that there was a very old building covering what is now the three houses, 1a, 1 and 3 St John Street in Thornbury.  This building was on a large plot of land which covered what is now The Georgian House.  Then around 1759 we think that the building was converted into a Must Mill and Toft.  We have copies of indentures which refer to this Mill.  A plan showing the Must Mill and adjacent buildings can be seen clearly on an indenture dated 1839 which is shown on The Georgian House page.  This clearly shows that the Mill covered the site of 1a, 1 and 3 St John Street.

The image on the left shows houses in St John Street.  The white house on the right with the hanging baskets is number 3, the pink house is number 1 and the stone faced house is number 1a.  It is easy to imagine that they were all once part of a single property.

The Must Mill appears to have been attached to an large ancient walled-garden which is mentioned in the deeds of number 5 St John Street. A must mill is usually concerned with the pressing of fruit. In this case we feel it is most likely to have been for the pressing of cider apples from the nearby orchard.

We know that in 1767 the property was purchased by George Rolph from Thomas Clark.   Following George Rolph’s death the property was inherited by his son, Thomas Rolph.  When Thomas died in 1814 his widow Frances conveyed the property to her son, also called George Rolph.  We assume that it was he who built a smart new town house, now known as The Georgian House, overlooking The Plain.  We believe that George may have closed the Must Mill around that time, although at the present time we don’t know what he used the buildings for.  Click here to read about the Rolph family

It would appear from the rate books that when William Knapp died in 1862, the buildings were acquired by Mark Crossman Meredith who re-developed them.  He created the two dwellings which became known as numbers 1 and 3 St John Street.  The remaining section (the part where 1a now stands) was retained as part of the ‘Georgian House’.

Numbers 1 and 3 St John Street were both owned by Mark Crossman Meredith according to the Rate Books of 1867, 1876, 1880, 1885 and 1890.  Mark died in 1884 and the Rate Book of that year shows that his wife then became owner of the properties. On August 24th 1895 there was an advertisement in a newspaper for the sale by auction of what was then Gloucester Villa but is now called the Georgian House and other property owned by Mark Crossman Meredith, including 3 St John Street.

We haven’t seen the deeds of the property and don’t therefore know much about the other owners and occupants of the house.  The 1926 Rate Book shows that the house was then owned by ‘William Sealy’ whom we believe to be Alfred William Sealy who lived at number 1.