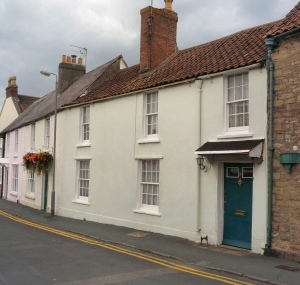 The present owners of 5 St John Street in Thornbury tell us they have seen the deeds of the house which mention that it was once a farmhouse surrounded by orchard and garden land.  We haven’t seen this document but there is plenty of other evidence to suggest that number 5 is one of the oldest buildings in the street.

Our history of the property starts with an indenture dated 20th March 1767 between Thomas Clark, a tallow chandler and only son and heir of the late Thomas Clark also a tallow chandler and George Rolph of Thornbury gentleman.  It relates to the sale of several properties in Thornbury to George Rolph, including ‘all that messuage or tenement wherein Joseph Williams wheelwright doth now inhabit with the workshop backside garden and orchard thereunto belonging situate and being in a street called Saint Johns Street‘.  This property was described as being adjoining the Must Mill which we know from plans to have been located in the properties later known as 1 and 3 St John Street.

There is some physical evidence suggesting that the original house was on this site before the Must Mill which adjoined it on the westward side.  There is a window on the westward side which is now bricked up but it would have looked out on to the land where the must mill was.  However this could also be explained by the fact that the Must Mill may have been a single storey building and the window may have looked out over the Must Mill roof.  The other interesting feature about the house is that it has a cellar.  We understand that none of the other houses in St John’s Street has a cellar (with the exception of The Georgian House).

The next reference to the property is in the last will and testament of George Rolph dated 30th July 1792.  The will referred to the fact that on 22nd September 1789 he had conveyed certain properties to his son, Thomas Rolph, surgeon of Southwark and his wife, Frances (then Frances Petty spinster).  These properties included the Must Mill, stables, orchard (of about one acre) with the press mill and ‘also all that messuage or tenement wherein James Wither carpenter did then dwell and Isaac Pullen currier doth now dwell with the workshop backside and such part and so much of the garden thereto belonging as then used and occupied therewith by the said James Wither‘.

An indenture of 3rd April 1818 concerning Francis the widow of Thomas Rolph describes a property as “that messuage or tenement wherein Joseph Williams wheelwright sometime since inhabited and James Withers carpenter afterwards dwelt and Isaac Pullin since dwelt but now divided into two messuages or tenements and wherein Richard Putley shoemaker and George Gough do now dwell with the workshop backside and such part and so much of the garden and orchard thereto belonging as is now used and occupied therewith by the said Richard Putley and George Gough.  All which said several messuages or tenements gardens and premises above mentioned and described are situate in or near the Borough of Thornbury aforesaid.”

Frances at that time was living in Charlotte Ville in Upper Canada and wished to sell her properties in Thornbury.  She placed them in the hands of her trustees, Edmond Salmon surgeon and Thomas Morris, gentleman, both of Thornbury.  Our next information is taken from a schedule of deeds and shows that George Rolph, presumably Thomas and Frances’s son, sold the property to James Ford in January 1824.

An indenture dated 1839, which also relates to the property now known as The Georgian House, states that it is ‘abutting Eastward on a building of the said James Ford formerly used as a flax shop but now converted into a stable‘.

The 1840 Tithe Map shows that the property was a ‘house etc’ owned and occupied by James Ford.

In 1849 it was bought by John Hodges, we believe, from James Ford.  The 1859 Rate Book shows it was owned by John Hodges.  On November 15 1873, John Hodges “agreed to convey settle and assume the messuage garden and hereditaments” for the use of his son, George Hodges, providing George paid an annual rent of £8.00 to his father and Martha Greenham (the daughter of George’s brother, James and now married to James Hobb Greenham).  We have learned about John and George Hodges as this family were responsible for building several houses in the area and owned quite a few others.

The Rate Books show that the house was owned by George Hodges up to 1905 when the owner is shown as the Representatives of the Late George Hodges and this is still the situation in the 1926 Rate Book.  In the 19th century many records refer to the house as number 3 St John Street until official street numbering was introduced about 1953 when it became number 5.

go to the occupants of this house
Toggle Sliding Bar Area