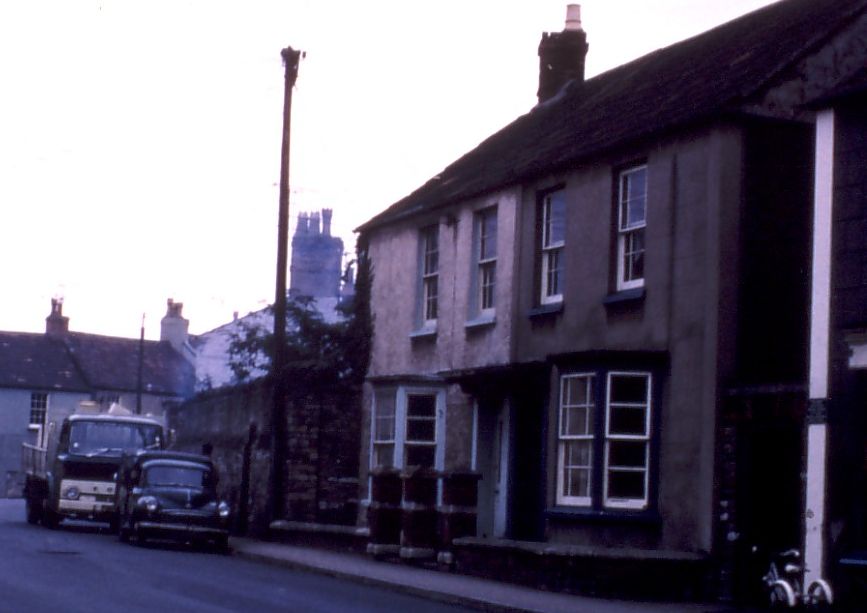 Numbers 6 and 8 St John Street in Thornbury were a pair of semi-detached houses alongside the bakery shown in the photo on the left.  We know an abstract of title dated 1941 that the houses were both built by Bryant Jenkins Burchell ‘on the site of two older houses.’

extract from the 1840 tithe map

The section of the 1840 Tithe Survey on the right below shows that there were 2 houses on the plot of land at that time and that the houses were obviously not the same ones which appear in the photograph of the Tithe Map on the right.

The 1941 abstract referred to them as ‘in which James Tether and Jane Morgan, Robert Harford, William Fowler successively dwelt and the other having been occupied by Richard Greenman and Sarah Greenman’.

At the time of the 1840 Tithe Survey the two houses were owned by Sarah Greenman who occupied one of the houses and the other was occupied by Charles Hopton.

Richard and Sarah Greenman– based on his age at death, Richard was born about 1762.  He was a labourer.  When he married Sarah Ball in Thornbury on 8th June 1807 he was already a widower.  We suspect that Sarah was baptised in Thornbury on 7th May 1786, the daughter of Daniel Ball and his wife, Martha (nee Gazard) who lived at Morton.

The Land Tax records appear to show that Richard lived in the same house in St John Street from at least 1812.

Of Richard and Sarah’s children,

From the Rate Books we suspect that the two new houses were built at some time in the late 1860s. Sarah Greenman was still listed as living in what was presumably still one of the older house in the 1851 Census.  Bryant Burchell didn’t own any properties in the 1859 Rate Book, but in the 1867 he owned one in St John Street occupied by James Powell and then in the 1876 he had the two adjoining houses.

He died on 15th December 1888 and in his will dated 22nd April 1872 he appointed his nephew, Henry Anstey and Henry Hume Lloyd his trustees and executors.  By an indenture dated 25th March 1889 they conveyed the two properties to Emily Weatherhead for £376.

Weatherheads – the two properties were acquired by Emily Weatherhead in 1889.  The Rate Book of 1890 describes Emily’s husband, John Weatherhead, as the owner of the property.  John was a draper in the High Street.  John died aged 54 in August 1891 but a planning application relating to number 4 St John Street shows that number 6 was owned by ‘Mr Weatherhead’ in 1898.  This must be an error as the 1894 to 1910 Rate Books show that Emily Weatherhead then owned both the houses.

Following Emily’s death in 1916, the two houses were owned by Emily’s trustees, her sons, Walter William and Ernest Percy and son-in-law, George Reuben Prickett.  The income from the houses were to benefit Emily’s daughter, Fanny Eleanor Weatherhead during her lifetime.  The 1926 Rate Books shows the two houses were still being owned by E. P. Weatherhead.  Fanny had moved away from Thornbury to live with her mother and continued living in Bedfordshire until her death in 1940. Read more about the Weatherheads

On 24th June 1941 the two properties were put up for sale at auction by Fanny Weatherhead’s executors (Emily Sophia Prickett and her sister, Ethel May Prickett, both living in Bedford).  Number 6 St John Street was described as ‘a dwelling house containing six rooms and garden, electricity installed.  Let to Mr L. C. Newport at £20 per annum, tenant paying rates.’ That house was sold to Leonard Charles Newport, a builder’s clerk living in John Street for £415.

Number 8 was described as a similar dwelling house adjoining and let to Mr S. Phipps at £20 per annum, tenant paying rates.  That house was sold for £430 but we don’t know the new owner.

On 1st June 1951, Leonard Charles Newport sold his property to Kate Wilkinson of Pullins Green for £1850.  Kate was the wife of Cyril Wilkinson, who ran the bakery at 4 St John Street.  The Wilkinsons eventually sold the house to their son, David, on 12th February 1973.

On 6th March 1974 6 St John Street and the bakery next door were sold by David John Wilkinson to Thornbury Rural District Council for £27,500.  Both properties were demolished as part of the town’s re-development.  They were replaced by a new section of road linking St John Street to Rock Street and an elderly persons residential home called Quaker Court.  Although we have not seen the deeds of number 8 St John Street, this was also part of the same re-development.