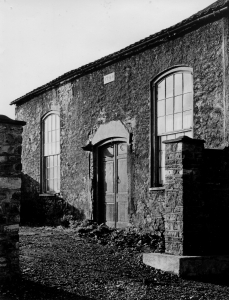 The photograph shows the Quaker Meeting House in St John Street in Thornbury.  This hall was built for the Quakers in 1794 as can be seen by the date on the stone plaque above the door.

The first people to become Quakers in Thornbury did so in the late 1650s and early 1660s.  As their numbers grew there was a need for a place for them to meet.  The first Meeting House was created in a barn in St John Street which was acquired in 1674.  Click here to read more about the Quakers in Thornbury

The building which was to become the Quaker’s first Meeting House was mentioned in an indenture dated 5th May 1606.  The property was being sold by John Hilpe of the Inner Temple London gentleman to Thomas Jones the Younger shoemaker of Thornbury for £5 10s.  The property was then described as:

‘all that one messuage tenement or barne with a garden and backside thereunto belonging containing half of one burgage be it more or less with all and single the appurtenances situate lying and being in Thornbury in a street there called St John Street and adjoining to the garden or backside of George Weare baker on one side and on the other side to a garden or backside of John Longe and which said premises now are or lately were in the occupation of the said Thomas Jones or his assign or assigns‘.

The above mentioned document is held by Bristol Records Office and their schedule of deeds includes the other deeds in the same packet.  We haven’t yet seen these documents but the schedule summary tells us that in 1613 Thomas Jones, then a shoemaker of Rangeworthy and his wife, Elizabeth assigned the residue of the 99 year lease on the property to a William Jones.  In 1651 there was a marriage settlement involving John Jones yeoman of Morton and Phillip Jones yeoman of Thornbury relating to the property then described as ‘barn, backside with orchard containing one quarter burgage in St John Street.’  The agreement gave the property ‘to the use of Ellianor Shepperd, widow of Morton and intended wife of John Jones’.  In 1668/69 there were several indentures showing the property was conveyed to Thomas Thurston, baker of Thornbury from the heirs of Thomas Jones, son and heir of the original Thomas Jones.  In 1671 Thomas Thurston was given permission by William Hayward to build a stone wall on William’s property at a rent of 2 shillings per annum for 20 years.

‘all that moeity, half part or half deale of all that one messuage or tenement or barne together with the moeity or one half of all that backside garden ground or plot of land thereunto adjoining or belonging or appertaining containing one quarter of a burgage (be it more or less) with all and singular the appurtenances situate lying and being in Thornbury aforesaid in a street there called St John Street adjoining to a house or tenement of the said Thomas Thurston now in the tenure or occupation of one Richard Bruan as tenant or assigns of the said Thomas Thurston on or nigh the North West and over against a parcel of land late of one Henry Marsh called Brayes on or near the North side and adjoining to the backside or lands of Edward Longe on or night the West part of the premises‘.

According to the schedule of deeds in Bristol Records Office the 1674 indenture is endorsed with the text ‘The owld wrighting of ……….the Meeting House in Thornbury’.  We don’t know anything about the size of the building nor what it looked like.  Our guess is that the property bought was the barn mentioned above with a small plot of land in the rear.

The Re-development of the Hall

We understand from Roger Howell’s account of the history of the Quakers in Thornbury that in the first half of the 18th century they flourished in Thornbury.  The original meeting house was rebuilt in 1702.  In 1715 the Quakers acquired the adjoining property.  The owner of that property, John Barley, left it to them in his will dated 24th August 1715.  John’s wife, Margery, had pre-deceased him and had been buried at the Quaker Burial Ground at Hazel on 22nd October 1714.   John’s will said

‘I give and bequeath my now dwelling house unto my cousin John Gayner the elder and cousin John Gayner the younger, John Thurston mercer and Edmund Howell the elder of Oldbury upon Severne and to their Heirs and successors for ever soe as upon Trust for the use and behoofe of poor friends called Quakers for evermore and they shall receive the Rents and Profits thereof for the use of the poor aforesaid and give an account thereof at the Quarterly Meeting once a year’.

Unfortunately the will was not executed properly according to the law so the two John Gayners and John Thurston bought the property from Thomas Barley, John’s son and heir and settled it on several trustees for the use of poor people in Thornbury.

The house was then converted to two tenements and rented out.  An indenture dated 1716 (which is very difficult to read) mentions Elizabeth Cook as one of two tenants.  An indenture dated 1757 involving changes to the trustees mentions that the tenements were then occupied by Jane Fowles and Thomas Gough.  The indentures describe the property as ‘adjoining the backside or garden late of one Charles Weare but now the Workhouse of Thornbury on or near the North West part thereof and to the backside or garden late of Samuel White but now of the burial ground on or near the South East part thereof and to the said street called St John Street on the North part thereof’.

An indenture involving the change of trustees dated 27th November 1809 describes some of the earlier history of the property.  It gives the impression that one of the two tenements was incorporated into the Meeting House at some time before the second house which continued to be let out to tenants.  Elizabeth Shepperd was specifically mentioned as being the tenant.  When that tenement became ‘very ancient and decayed state and certain other messuages or tenements also belonging to the said people or Society called Quakers and near adjoining thereto being in a similar state the same respectively were by the said Society in or near 1794 taken down and a new meeting house on an enlarged and improved form and a stable and shed were erected and built partly on the site’.  The residue of the garden plot that was not built upon was incorporated into the burial ground. 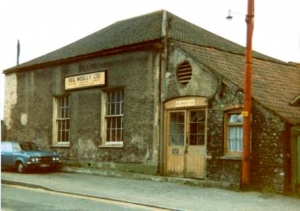 We assume that the new Meeting House built in 1794 appeared just like it does in the photo on the left at the top of the page.

We understand from Roger Howell’s account of the history of the Quakers in Thornbury that Thornbury meetings continued to be held at the Thornbury Meeting House until 1847.  As the numbers of Quakers in the town diminished, there was less need for a Meeting House in Thornbury.  It was decided to discontinue the meetings at Thornbury and its members were to consider themselves as members of the Olveston meeting.  The following year the decision was taken to let the redundant building out for use as a school or some other suitable purpose.  It was for a while, in the second half of the 19th century, used by the Council School for the infant classes until their new building was opened adjoining their main school.

On 7th July 1857 the property was transferred to new trustees who appear to be governed by the body known as the Charity Commission, subject to a yearly payment of fifteen shillings to the Society of Friends.  We are not sure what they did with the property apart from the letting it to the Council School referred to above.  On 2nd January 1934 Charity Commissioners sold the Meeting Hall, stable and other outhouses to Tucker Brothers for £300.  The burial ground was not included in the sale.  The Tucker Brothers were a firm of local builders.  Their offices were located opposite the Meeting Hall at 13 St John Street.  They used the Hall and burial ground as a builder’s warehouse.  Read more about the Tucker Brothers

On 25th July 1958 the burial ground (said to be 0.044 acre) was sold to the Tucker Brothers for £50.  It was said to be ‘land set aside for a burial ground, but no longer used for that purpose’.  We are not sure what happened to the human skeletal remains buried on the site.  We know at some time they were exhumed and re-interred at the Hazel Burial Ground at Hazel, but we have been told that this didn’t happen until 1981. 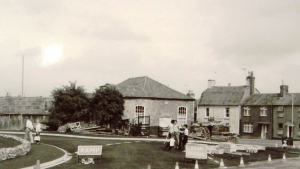 We are not sure when the Tuckers Brothers ceased operating.  On 13th November 1968 Ronald Tucker, the last surviving partner of the business, let the property to Reg Webley Ltd as a joinery workshop and yard.  The photograph on the right at the top of the page show the property being used by Reg Webley Ltd.  The company was dissolved in 2002 when the main office was located in Wine Street, Bristol.   On 19th February 1976 Ronald Tucker sold the property to Thornbury Rural District Council.  The price was £16,750.  Reg Webley’s business was still occupying the property at the time of the sale and they were allowed to continue there.  On 3rd November 1981 Reg Webley surrendered their lease to the TRDC who set about demolishing the buildings and clearing the burial ground for re-development.  They erected a building providing sheltered accommodation for the elderly which they called Quaker Court.