Occupants of 1 The Plain The Eleys – the land tax records show that James Eley was occupying the house that later became 1 The Plain in Thornbury at least by 1800, although he may have been living here from the date of his marriage in 1787.  James operated as a staymaker and linen draper from his shop in the house.  He died in 1831 and the premises was left to his daughter, Martha Eley.

Martha was a bookseller, stationer and fire and life insurance agent.  She shared the house with her sister, Elizabeth who was a milliner and straw hat maker.  Both Martha and Elizabeth died in 1850 and the property was left to their brother, James Eley.

James (Junior) had become a saddler and settled in Berkeley with his large family.  He continued to rent out the property on The Plain and on his death in 1861, his wife, Ann Eley, continued to live off the income until about 1876.  Click here to read about the Eley family

James Vaughan – James seems to have taken over the house following the death of the two Eley spinsters.  James Vaughan was born on 6th March 1812.  He was the son of John Vaughan, a tailor and his wife, Hester (nee Latch).

In 1841 James was a druggist aged 28 living with his mother, Hester in the house which later became known as 53 High Street.  It was then owned by James’s aunt (and Hester’s sister), Elizabeth Clark. Hester died aged 63 and was buried on 23rd June 1845.

James married in the Clifton area of Bristol area in 1844.  His wife was a widow, Eliza Leonia Boucher.  Eliza Bryant had been married in 1838 to John Boucher and they had two children: Eliza Nightingale born in 1840 and Lucy in 1842.  John had died in 1842.

The 1851 census shows John and Eliza living at the house which later became known as 1 The Plain in Thornbury.  James was a druggist aged 38 living with Eliza aged 30 from Bath, daughter-in-law, Eliza Boucher aged 10, daughter Selina aged 6, and a servant, Ann Cook aged 16.

In 1859 there was an interesting court case involving James.  It shows that James kept a number of fowls which were in the habit of going into the yard of the Boars Head (now the Royal George).  James felt that he had been losing hens and on noticing he had lost one more, James went around offering a reward of 10 shillings to anyone who would tell them where the hen was.  He asked two customers (Guy Smith and George Allen) in the Boars Head and they both denied seeing the hen.  Shortly after George Allen came and told James that the hen was under the tub where he and Smith had been sitting in the kitchen of the Boars Head.  James refused to give him 10 shillings and only gave him 3d.  He then went over to find his hen roaming around the yard of the pub.  Guy Smith admitted the theft but said he only did it for a lark.  He was charged with the theft, although we don’t know the outcome in court.

Thornbury Museum has an account of the Thornbury Flower Show of 1860 which is written in a broad Gloucestershire dialect and doggerel verse.  It seems to indicate that James Vaughan made hot air balloons but as there was more than one James Vaughan in the area we cannot be sure that it is the same man.  We would like to be certain;

“But that tuck my eye th’moost

(Tween you and I and vander pooust)

Az went up in th’arteroon,

Until it reached th’Church -Lane ground.“

The flight would appear to have been about 50 yards!

A transcription of letter written in 1920 from Canada by James Vaughan’s daughter is printed in the wonderful little book called ‘Aunt Beat’s Scrap Book’.  In this, she recalls how ‘5th of November was a great time.  About three in the morning we were awakened by cannons, which continued until broad daylight.  The huge bonfire on the Plain was lighted about 4.30, and everyone seemed to gather there.  My dear father, J. Vaughan, used to commence by putting a red light on one of the pillars outside his shop.  I remember all the firework lovers used to be waiting – Mr O. E. Thurston, Mr H. H. Lloyd, Mr Hatcher from The Grange and many others.  My father made his own fireworks and they were considered very good‘.

The 1861 census shows them still living in the same house.  They were now living with their daughter, Selina a milliner aged 16, step-daughters, Eliza and Lucy Boucher aged 20 and 19 respectively and niece, Emily Clark a dressmaker aged 16 from Bristol.

The 1871 census shows James and Eliza were now sharing their house with Eliza Balls, their married stepdaughter and milliner aged 28, Lucy Boucher stepdaughter and milliner aged 25, daughter, Selina a milliner aged 23 and Percy Balls, grandson aged 4.  James’s step-daughter, Eliza Nightingale Boucher had married Charles Balls in Bristol in 1866 and they had a son, Percy James W. born in 1866.  We don’t know what happened to Charles as Eliza continued to be shown as ‘married’ and Charles was not listed as living with the family in any of the censuses.

In the 1891 census the house was unoccupied. James Spencer Palmer – James Spencer Palmer set up his chemist shop and dental surgery at 1 The Plain in 1891 following the death of James Vaughan.  The Rates Books of 1894 and 1899 shows there as does the 1901 census.  This shows that James was a chemist and dental surgeon aged 48 born in The Lizard, Cornwall and he was living in the house with his wife, Amy aged 38 from Charfield and their seven children.  In 1902 James moved to newer and larger premises at Coronation House, two doors down from The Swan Hotel.  Click here to read more

John Hodges Williams – John opened his Bon Marche store in 1902.  John was a draper and outfitters who had at least one other shop in Thornbury and acquired a large number of properties in the town.  He carried on business at 1 The Plain until he died in 1934.  Click here to read about John 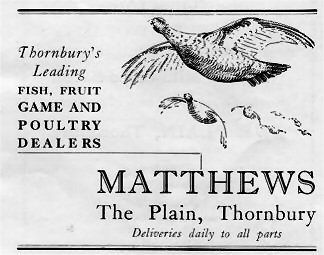 David John & Elsie Matthews – in 1931 the Matthews family moved from Oldbury to 4 The Plain where David ran a shop selling fish and fresh fruit.  At that time their son, Roy David, who was born on 2nd August 1924 transferred from Oldbury School to the Council Upper School in Thornbury.  In 1936 Roy gained a scholarship to the Grammar School.

Jack Pridham who lived nearby at that time says he can remember Roy being confined to bed for a long time due to a bout of Scarlet Fever, which was a very serious and not uncommon complaint then.  Jack remembers this specifically because Roy had a toy that went up and down on a string which he had dangling from his bedroom window.

By 1938 the family moved to 1 The Plain where he continued trading in fish and fruit.  The register compiled in 1939 in preparation for the War shows David as a shopkeeper (fish, fruit and greengrocer) born on 17th February 1893.  He was an ARP Warden during the War.  Elsie was born on 1st March 1895.

During the War, Jack Pridham recalls that the window was piled high with yellowy cream whale meat which was not particularly popular.  Initially the shop was run by David John and Elsie Matthews, but the electoral registers from 1954 to 1958 show their son, Roy David, and Joan E there.  In 1955 the Gazette reported that Roy David was caught speeding in his pickup van at Almondsbury.  In his defence Roy said that as he was driving a licensed goods and private vehicle he did not realise that he was subject to the restriction.  He was given a conditional discharge and his licence was endorsed.  The Thornbury Flower Show programme for August 1955 shows that the shop sold fresh fish and fruit and traded as R. D Matthews.

William and Fay Holdaway – from about 1959 the house and shop were taken over by William A and Fay G E Holdaway.  They have moved from Chippenham.  We have been told by Mrs Holdaway that when her husband wanted a change from his factory job in Chippenham they looked for business opportunities and were brought to Thornbury by an agent.  When the car stopped outside of 1 The Plain, she said straight away – ‘This is it’.

They continued to run the same business as the Matthews had before them – fresh fruit and fish – which were bought early each morning in Bristol.  In 1968 they purchased Epworth House in Castle Street and in 1970 they sold the shop on The Plain to T & J Owen.

T & J. Owen – they took over the business in 1970, initially carrying on the same business as their predecessors, the Holdaways – selling fresh fruit and fish.  The Owns had been trading at 26A High Street for a few years before moving to The Plain.  They gave up selling fish after a short time and gradually gave up the green grocery side of their business.  They have since established a well respected florists and an associated business as landscape gardeners.  As you would expect with her floral interests and artistic talent, Jean has been a regular winner of the Best Decorated Window Display at different times of the year.  The Town is also indebted to her for the wonderful work she does to make the Town Pump on The Plain look so attractive throughout the year and the efforts she makes towards the Thornbury in Bloom.  Click here to hear Jean talk about the services she provides