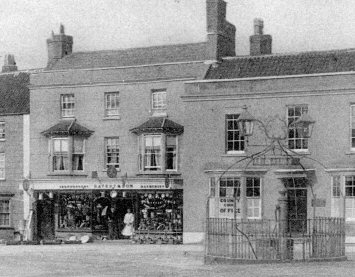 Most of us recognise the shop in the photograph shown on the left above as Savery’s shop.  The photo on the right below is less recognisable, but it shows the same building, taken before it was bought by the Savery family in 1898 and converted into a shop.

The actual building is much older.  We don’t know how old.  An indenture dated 24th August 1897 refers to it as ‘the messuage or tenement now known as Prospect House formerly erected and built by Thomas Hulbert.  We know however of two, may be three, Thomas Hulbert’s with Thornbury connections.  The earliest was a baker who died in 1763 aged 76.  Another Thomas was listed in the Universal British Directory as being a chandler in Thornbury in 1791.  Then, we have the record of a marriage of a Thomas Hulbert at the Friends Meeting House on 21st February 1835.  He was described as being ‘of Thornbury, formerly a soap boiler in Bristol.  His wife was Miss Elizabeth Holly of Bristol. 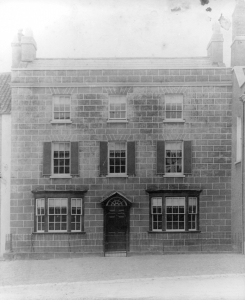 The earliest owner we can put a date to is William Scott.  The 1840 Tithe Survey shows that William Scott owned the property, clearly identified on the Tithe Map as Plot 261 a house and garden.

William Scott – on 23rd June 1788 William (then described as William Scott Bird married Hester Wetmore the daughter of John Wetmore.  The 1791 Universal British Directory shows William was a surgeon and apothecary in Thornbury.  The and tax records show that William almost certainly owned the property from 1800 onwards, may be even earlier as we have no records covering the years from 1784 (when William was not listed as being in Thornbury as an owner or occupant).

It is interesting to see that the 1800 and 1809 land tax records lists William as owning two properties.  One of these is called the Mill House which we now know to 1 Bath Road.

We are not sure if William ever lived in the house on The Plain or where he may have lived in Thornbury.  The 1800 land tax record does show William as the occupant of the second house which he owned in the listed (valued at only 3s 6d).  On 24th June 1807 an indenture in which William and Hester sell the property called the Mill House describes William as “late of Thornbury and now of St Paul’s” in Bristol.

In 1830 he is shown as the occupant of the 13 The Plain property.  The naming of the owner as being the occupant does not always imply that he was actually living there, as in some cases this would mean that the same person would be living in several properties at the same time.

We know that in the 1841 census William was shown to be living in central Bristol, in the area of St James and St Pauls, which suggests that he continued to live in that area after 1807.  He was described as a surgeon aged 75 living with Eliza aged 50 and two other independent ladies.  There is an entry of Pigots Directory for Bristol showing William Scott as a surgeon whose address is given as 11 North Street, Bristol.

Edward Gough Councell – the 1830 rent roll shows that William Scott owned the property at that time, but the name of Edward Gough Councell was written above William’s name indicating that Edward owned the property at a later (unspecified) date.  Usually this indicates that Edward would have owned it at some stage within the next 20 years of 1830.  Click here to read more

James Jones – the 1859 rate book shows the house was owned and occupied by James Jones.  The 1861 census shows the house occupied by James Jones, aged 45 born in Bristol and his wife, Charlotte aged 37 born in Thornbury and their servant Elizabeth Barton aged 21 from Tytherington.  The census stated that James was a member of the Royal College of Surgeons and a Licentiate of the Society of Apothecaries and GP.  Click here to read more

On 29th September 1868 the house was put up for sale at auction by James Jones.  It was advertised as a ‘Freehold Residence – all that modern and substantially built messuage or dwelling house with the large and productive walled garden attached to the same, eligibly situate adjacent to The Plain in the High Street of Thornbury and now in the occupation of the Proprietor, James Jones Esq.  The house contains well-proportioned drawing and dining-rooms, breakfast-rooms, kitchens, china pantry, six bedrooms, large underground cellar, rain water cistern, and the usual domestic offices and is in good repair‘.

Nicholas Cornock Grove – in 1868 the property was sold by James Jones to Nicholas Grove.  Nicholas tried to sell it almost immediately – a notice appeared in the Bristol Mercury classified adverts dated 15th May 1869.  It said ‘Thornbury – Prospect House – situate in the best part of the town; just put in thorough repair, with a large walled garden attached. Immediate possession. Bus passes the House to and from Patchway station four times daily. Address- Nicholas Grove, Thornbury‘.  It failed to find a buyer.

Nicholas never lived in the property as far as we know.  Click here to read more  When Nicholas died on 19th December 1877, he left his property to his wife, Julia, and on her death in 1879 it was left to her daughter Stateira Elizabeth.  Stateira married William Hanslip Partridge in the Clifton area in the early 1879.  William was the son of Rev John Partridge and was already serving in the Navy at the time of his marriage.  In 1879 he fought in the Ashanti War serving on the HMS Barracuta and went on to become Paymaster Commander.

On 28th February 1879 the property was put up for auction.  It was described this time as: “All that commodious and well-built dwelling house, with large productive garden, newly built four-stall stable, coach-house, and saddle room, with lofts over, situate in the High Street containing altogether about an acre, in the occupation of Dr Grace at a rent of £55 per annum.  The house contains – On basement, underground cellar: ground floor, entrance hall, dining, drawing and breakfast rooms, surgery or study, kitchen and scullery; and six bedrooms.”

Thomas Henry Taylor – on 28th February 1879 the property was sold by the Groves to Thomas Henry Taylor for £850.  In 1851 Thomas was a medical student in Bristol.  In June quarter 1864 Thomas married Sarah Norris in Clifton.  Sarah was born in Out Liberty, Tenby in March quarter 1841, the daughter of Richard and Charlotte Norris.  In 1861 Richard was described as a gentleman farmer and fundholder living at Lodge Farm, Tenby.  The farm was 120 acres and employed 2 labourers.

In 1871 Thomas was serving as a surgeon in the Royal Navy stationed on the H.M.S. Black Prince at anchor in the Clyde off Greenock.  The 1881 census shows Thomas and Sarah had settled in Thornbury.  He was described as a ‘Staff Surgeon R. N. Retired M. R. C. S. Eng. L. S. A. in General Practice’.  He was aged 51 and born in Falmouth in Cornwall.  His wife was Sarah aged 40 and born in Tenby.  They were still living there in 1891 census and the 1894 Rate Book, but by 1897 they had moved to Wales.  When Thomas sold the property on 24th August 1897 he was described as a ‘surgeon of Saundersfoot’.  The 1901 census shows Thomas and Sarah had moved to live with Sarah’s mother, Charlotte Norris in her home at Rhodewood Lodge, St Brides Hill, St Issells.

When the house was sold by Thomas Henry Taylor, the conveyance describes the full extant of the property as:

The Western Daily Press of February 2nd 1903 announced that Thomas Henry Taylor of Rhodewood Lodge Saundersfoot Pembroke (formerly of Prospect House Thornbury) had died on 14th December 1903 and that probate was granted to his widow Sarah and to Thomas Sturge solicitor.

The Savery family – the house was bought by Edwin Savery in 1898 and converted into a shop.  Edwin and his descendants have traded there and lived above the shop ever since.  Click here to read more.