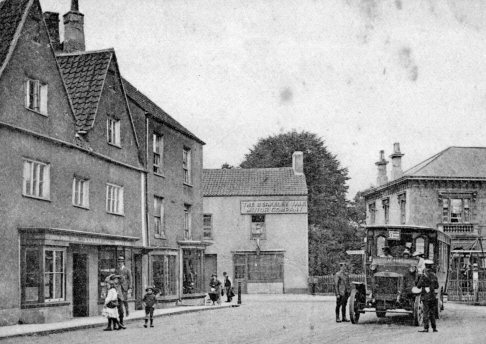 Number 2 The Plain is the house and shop on the left of this photo.  Many Thornburians still refer to this shop as ‘Dorothy Gubbins’.  It took this name from Dorothy Gubbins who ran a sweet shop here for a few years in the 1960’s, although it continued trading under that name when the Whittalls acquired the business.

We don’t know when the house and shop were first built and nothing about its early owners until 1800.  We have ben told that the gabled roof indicates that it probably originated in the seventeenth century.

The Eleys – the land tax records show that James Eley owned the property in 1800.  James also owned the house next door, number 1 The Plain, which was his home and shop.  He died in 1831 and both properties were left to his daughter, Martha Eley.  Martha died in 1850 and they were then left to her brother, James Eley.  The 1859 rate book shows James as the owner of the two properties which later became 1 & 2 the Plain.  James (Junior) had become a saddler and settled in Berkeley with his large family.  He continued to rent out the two properties on The Plain and on his death in 1861, his wife, Ann Eley, continued to live off the income from the rents until about 1876.  Click here to read about the Eley family

James Vaughan – the 1880 rate book shows that the house and shop had been acquired by James Vaughan.  James was a druggist who had been living next door at number 1 The Plain since about the time of the 1851 census, perhaps earlier.  Although James continued to rent number 1 from the Eleys and then the Williams family, he bought number 2 for his step-daughter, Eliza.  Following James’s death in 1891, the property became owned by a ‘Mrs Day’.  Click here to read about James Vaughan

Selina Eliza Day – the 1894 rate book shows the property was owned by ‘Mrs Day’.  This was Selina Eliza Day, the wife of John Day the butcher.  Selina was the daughter of James Vaughan and had obviously inherited the property following James’s death in 1891.  The rate books show Selina continued owning the property up to at least 1905.

Fred Church – the 1926 rate book lists Fred as the owner and occupier of the shop.  Click here to read more about Fred

Click here to read about the OCCUPANTS of 2 The Plain