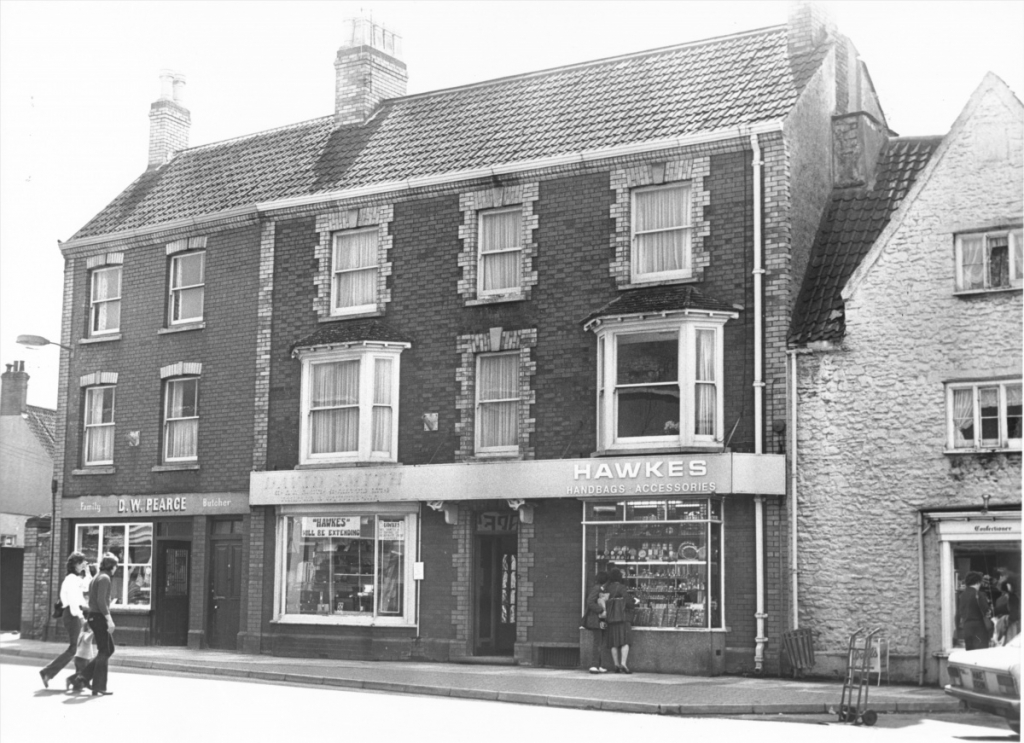 The two large impressive buildings we know today as numbers 3 and 4 The Plain were built in the 1870’s.  We are fortunate to have copies of various indentures referring to the earlier history of the property and several other sources providing information about about what was on this this site before 1870, who owned the property and who occupied it.

The clearest picture is provided by the 1840 Tithe Survey which shows that this was Plot 203, three houses owned by Thomas Crossman and occupied by Henry Withers, Thomas Lavis and William Eddington.

However we can go back further to 24th and 25th March 1796 when there was an indenture of lease and release conveying the property from John Neale, a gentleman from Thornbury, to John Croome.  We are not sure exactly how many properties the earlier documents refers to, although an indenture dated 1821 refers to the ‘premises were formerly divided into two messuages’.  This might suggest there may have been two houses on the site, but only one in 1821 and that the three houses were created shortly before 1840.  The following is the list of owners of the property up to 1840:

John Croome – we know from the 1800 land tax record that John Croome owned and occupied the premises.  John is listed in all the land tax records as the owner and occupier of the same property up to 1819 and was still the owner in 1821 when it was occupied by Richard Scarlett.  John was born about 1760 according to his age at death.  He could therefore be the John Croome baptised on 17th February 1760 at Rockhampton, the son of John and Sarah Croome.

John married a widow, Lydia Gastrell, in Thornbury on 21st June 1791.  The report of their marriage in the Bath chronicle of 30th June 1791 says that John was a schoolmaster and Mrs Gastrell was governess of a school for young ladies.  The witnesses at their wedding were Hester Child, Flora Knapp and William Knapp.  Lydia’s maiden name was Pook and she had an illegitimate child, James, baptised on 16th August 1780.  She had married a Thornbury cooper, James Gastrell, on 9th June 1782.  The witnesses at this wedding were Hester Gastrell, Flora Child and Edward Gastrell.  James and Lydia had four children: twins, Edward Gastrell and Mary Thomson Gastrell born on 4th October 1783, Martha Thompson Gastrell born on 17th February 1785 and Hannah born on 7th September 1787.  Their son, Edward, died in his infancy and Hannah died aged 3 on 6th May 1790.  James Gastrell died on 2nd December 1787 aged 35.

We have seen receipts from John Croome dated 1809 for the education of three of the sons of Thomas and Frances Rolph, namely John, George and Romaine.  The following year’s receipts show that John Croome continued to teach them writing and arithmetic.  John was Mayor of Thornbury in 1808/1809.

John and Lydia had one daughter, Eliza born on 30th July 1792 and baptised on 26th August 1792.  Lydia died aged 56 on 31st August 1810.  John is party to an indenture dated 25th March 1820 which suggests that he was selling property he owned on Pullins Green on the corner of Mutton Lane.

John died aged 61 on 10th April 1821.  The burial record shows John’s abode at the time of his death was Winterbourne.

We know that Eliza became a schoolteacher like her parents and she married John Lane, although we haven’t been able to find confirmation of the marriage. (see below)

John Lane – the land tax records for 1822 and 1823 show the owner of the property was John Lane.  John was married to John Croome’s daughter, Eliza, so following John Croome’s death in 1821 the property must have passed to John and Eliza as they are both named as owners when it was sold on 2nd April 1824.  John Lane was described as a plumber, glazier and house painter of Corsham in Wiltshire.  We know that in the 1841 census John and Eliza were living in the High Street between the Register Office and the White Hart.  Click here to read more

In the sale of 1824 the property was described as ‘all that messuage or dwelling house with the yard garden and outbuildings thereto adjoining and belonging now in the occupation of John Bevan cooper situate in the Town and Borough of Thornbury aforesaid at a place there called Bells Cross or the plain and abutting and adjoining to the East to a tenement belonging to the Corporation of the said Borough and now used as an almshouse and to the West to a messuage belonging to Mr James Eley said premises were formerly divided into two messuages and were purchased by the said John Croome of and from John Neale of the Town and Borough of Thornbury aforesaid Gentleman and were conveyed to him by indentures of lease and release bearing the date respectively of 24th and 25th March 1796‘.

John Bevan – the land tax records from 1824 to 1832 (note 1832 is the last land tax record we have seen) show the house was owned and occupied by John Bevan Junior.  John was one of twins born on 9th January 1793, to John Bevan and his wife, Esther.  He was baptised on 28th July 1793 with his twin sister, Susannah.  John’s full name was John Withers Bevan, his father, John Bevan had married Hester Wither on 30th September 1782.  It is somewhat confusing when looking through the various records to see that John is sometimes described as John Bevan and at other times uses the names of John Bevan Junior or John Withers Bevan.

We are grateful Ruth Withers for telling us that John married and Grace Gibbons at St Pauls Church, Portland Square, Bristol on 4th December 1820.  They had at least two children: John Frederic baptised on 16th December 1821 and Henry baptised on 1st October 1823.  Both these baptism records show John was a cooper.

On 9th April 1824, John and Grace acquired the property on The Plain.  It was bought on 2nd April 1824 from Jane and Eliza Lane by a widow, Anne Gibbons, who was Grace’s mother.  Anne must have bought it for Grace and her husband as it was conveyed to them only a week after Anne bought it.  Grace only lived for another month.  She was only 23 when she was died and she was buried on 23rd May 1824.  In her will dated 10th May 1824 Grace refers to an indenture of lease and release dated 8th and 9th April 1824 which conveyed the property from Anne Gibbons to Grace and John Bevan.  The property was then described as ‘all that the messuage or dwelling house in which my said husband and myself now reside situate in the town of Thornbury aforesaid at a place there called Bells Cross or the Plain with the yard garden and outbuildings thereunto adjoining and belonging‘.

It is worth noting that as well as the property on The Plain which John acquired through his mother-in-law, Anne Gibbons in 1824, he also acquired from her another separate piece of garden land.  It was described as ‘And also all that garden now in the occupation of the said John Bevan situate in the Town and Borough of Thornbury aforesaid and bounded on the North Westward side by a garden belonging to and in the occupation of William Rolph Gentleman and on the North side by premises belonging to (blank) Taylor on the Northeastward side by a messuage and garden belonging to James Ford maltster and fronting and abutting on the South to a street or highway leading from Bells Cross or the plain aforesaid to Saint Johns Cross and commonly called Saint johns Street and which said garden was purchased by the said John Croome deceased of and from the said William Rolph and were conveyed to him by a certain indenture bearing the date 3rd May 1817‘.

We know that John got into financial difficulties and he appears to have lost his properties.  In 1831 he appears to have served time as a debtor in Kings Bench Prison in London.  When charged at Gloucester Courthouse on 16th July 1831 he was described as a cooper and dealer in coals and also licensed to let post horses, currently out of business.  John’s properties appear to have passed to his mortgagee, Thomas Smith.  By 1840 the properties in St John Street were owned by Luke Withers.

A later indenture dated 8th January 1833 show Thomas Smith of Henbury as the owner.  As well as the property on the Plain this indenture shows that there were three houses built by John Withers Bevan on the garden in St John Street.  We believe the three houses referred are those now referred to as numbers 13, 15 and 17 St John Street.

On 20th June 1829 John was charged with the assault William Nostaw in Thornbury.  He was fined 2s 6d with 2s 6d costs.

We are grateful again to Ruth Withers for finding them in the 1871 Canadian census.  This shows John and Sophia living in West Toronto, Ontario in Canada with their daughter, Grace aged 37.  John was a cooper aged 76.  Another entry in the 1901 census suggests that Grace had emigrated in 1840 which is presumably the same time as her parents emigrated there.  In 1901 Grace was living with Florence Owena Godfrey, her grand-daughter and the daughter of Owen Theophilus Bevan who was also known to have been in Canada.

Although we have a copy of a 1833 indenture referring to Thomas Smith and Joseph Hignell we don’t know how each of them were associated with the house.

Thomas Crossman – by 1840 the Tithe Survey was showing that Thomas Crossman was the owner and that there were now three houses on the plot.  We do not know when this happened. Thomas was still listed as the owner of the three properties in the 1859 rate book.  Click here to read more