Occupants of 4 The Plain

By 1876 the two houses which know as 3 & 4 The Plain appear to have been built.  Both houses were owned by William Bevan, the one nearest St Mary Street was occupied by William himself.  The 1880 and 1885 rate book shows that ‘E.B. Lonnen’ was the owner.  Edwin Boyes Lonnen was a draper.  He married Ann Elizabeth Dodd in 1866 and they had at least 5 children.  They owned several other properties in the High Street but after living on the High Street for a short time and then in Porch House, Castle Street, they appeared to move out side of the town.  The 1877 trade directory shows Edwin running a shop as a linen and woollen drapers, hosiers, boot and shoe dealer and grocer.  In 1877 he was also the Mayor of Thornbury.

By 1890 John Hodges Williams had acquired the property and he was still listed as the owner in the 1926 rate book.

John and Selina Day – the 1880 rate book and 1881 census shows the property was occupied by John Day.  The census shows John was a butcher aged 31 from Hill and he was living there with his wife, Selina Eliza aged 35 from Thornbury and their son, Charles V who was aged 6 and born in Abergavenny.

John was born in Hill about 1850, the son of Charles Day.  In 1861 he was aged 20 living with his uncle James Day and James’ sister, Ann Day aged 66.  John became a farmer.  On 19th May 1873 John married Selina Eliza Vaughan, the daughter of James Vaughan, a chemist.  They had one child, Charles Vaughan Day born in 1874 when the family were living in Abergavenny, Monmouthshire.

Further rate books up to 1890 show John continued living here.  The 1891 census shows however that they had moved to Oldbury Naite where John had become a farmer.  After the death of Selina’s father, James Vaughan in 1891 Selina inherited the ownership in number 2 The Plain.  She continued to let the property to her half-sister, Eliza Balls, and then Eliza’s son, Percy.

The 1901 census shows Selina was of ‘independent means’ and she was living in the home of her son, Charles.  He was a tramways inspector living in Nether Hallam, Sheffield with his wife, Minnie H who was aged 23 from Cradley in Warwickshire.  We don’t know where John was at the time of the census and what happened to either of them after this time.

John Nathaniel Bartlett – the 1891 census shows John was occupying the house.  He was a butcher aged 27 living with his wife, Ellen aged 28 from Westerleigh and their son, Arthur John aged 2.

John was born 3rd June 1863, the son of John Bartlett, a stonemason, and his wife, Sarah.  The 1871 census shows the family living in the Hackett.  The 1881 census shows John had already become a butcher and he was living in 19 St John Street at the home of his uncle and aunt, James and Emma Underhill.

On 6th September 1887 John married Ellen Withey in the Thornbury Congregational Church.  Ellen was born about 1862, the daughter of George Withey, a farm shepherd, and his wife, Ann.  In the 1881 census Ellen was living with her parents at Box Hedge Cottage, Westerleigh.

John and Ellen had one son, Arthur John, baptised in Congregational Church on 21st August 1888.  The 1890 rate book shows that John and Ellen lived initially at 6 Pullins Green.  By 1891 census they had moved to 4 The Plain. 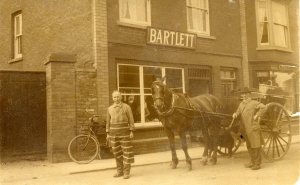 John was a member of the Congregational Chapel.  The photograph above was taken from one hanging in the Chapel which shows the name of ‘John Bartlett – Deacon’ so we assume this to the same John.

Ellen died on 30th March 1894 aged 31.  John married again – his second wife was Elizabeth Celia Sainsbury on 22nd March 1897.  Elizabeth was born June 28th 1861, the daughter of Frederick Sainsbury, an agricultural labourer and his wife, Ellen (nee Webb).  John and Elizabeth had three children.  A daughter, Hilda Elizabeth, born on 28th June 1898.  She started at Council Upper School in 1905 and the notes in the school’s admission book records she left in 1913 to go to Thornbury Grammar School with the intention of becoming a primary school teacher.  She was only at the Grammar School for one year and we do not know whether she ever became a teacher.  The school register just notes that on leaving she was ‘At Home’.  A son, Herbert Frederick was born on 12th September 1900, but he died on 7th April 1901.  A daughter, Nora May was born on 19th May 1902 and she died on 18th April 1903.

In 1901 John was living on The Plain with his wife, Elizabeth Celia aged 39 from Thornbury and their three children: Arthur John aged 12, Hilda Elizabeth aged 2 and Herbert Frederick aged 6 months.  Little Herbert did not survive until his first birthday and he was buried in Thornbury Cemetery on 11th April 1901.

The Western Daily Press of December 12th 1906 had a long account of a court case which arose from a dog biting the horse of the carriage that John was driving.  Not only was John thrown from the carriage, sustaining a broken arm, but the horse according to the vet John James now had badly injured legs and was not suitable for a brougham.  The claim was that the dog was accustomed to behave like this and chase horses.  John was awarded £40.00 damages and costs.

The 1911 census shows John, Elizabeth, Arthur and Hilda still in the same house.  Elizabeth died on 24th July 1914 aged 53.  In 1917 when he completed an application form for his son to be exempted from National Service it appeared John’s health was not very good.  He wrote  “My son has always worked with me in my business worked with me in my business and for many years has taken full charge of the country rounds. and for the last five or six years since my health has become impaired he has been doing most of the slaughtering.  I have no other employee of military age.”

Despite these problems the trade directories show John continued trading on The Plain until at least 1931.  The special register compiled in 1939 in preparation for the war shows John was living with his daughter, Hilda and her husband, Lionel Riddiford at 51 High Street.  John died on 22nd January 1941 aged 77.  Click here to read about his son Arthur Bartlett

David John & Elsie Matthews – in 1931 the Matthews family moved to 4 The Plain from Oldbury.  Click here to read more

Stanley Albert Godwin Coombs  – the 1938 electoral register shows Albert was living in the house with his wife, Ellen.  Stanley was born in Bristol on 10th March 1900.  He was the son of Henry Coombs, a carpenter and joiner and his wife, Edith.  In the 1901 census they were living in 10 Dover Place, St Andrews in Bristol.  In December quarter 1931 Stanley had married Ellen Cornock, the daughter of William Joe Cornock and his wife, Hannah Maria (nee Knapp).  Ellen was born on 17th March 1906.

We know from a Gazette newspaper article dated 1938 that Stanley was a butcher on The Plain.  The article reports on the tragic death of Stanley and Ellen’s only child, William Godwin Coombs who was killed in a road accident aged only three and a half.  William had been taken out on the van delivering meat around the area.  Another boy, George Payne, was also being given the treat of a ride out.  Whilst the driver, William Charles Pitt of The Plain, went to the back of the vehicle to cut up some meat for a customer at Falfield, ‘Billy’ got out and was run over by another vehicle.  An inquest was held and returned a verdict of accidental death’ without anyone to blame.

A. E. Baylis – we have a copy of a photo of The Plain taken in the 1940’s/early 1950’s which shows the name of ‘A.E. Baylis’ over the shop window.  At the present time we don’t know any more about this Baylis family and would be grateful of more information.

The Pearces – we understand that Donald Walter Pearce took over the business in 1952.  Donald’s family came from the Chew Valley area and he moved to Thornbury in 1952 after living in Olveston and Bevington.  The electoral registers from 1954 to 1965 (of the ones we have seen) list Donald W & Vera J Pearce as living at 4 The Plain.

Donald’s marriage to Vera J Newman was registered in the Thornbury area in 1945.  We believe Vera had been born in 1925, the daughter of William J Newman and his wife, Laura S (nee Whitcombe).

In 1967 Donald and Vera moved to Olveston and the shop was taken over by their son, Howard.  The shop continued trading under the name of ‘Pearces, the butchers’, right up to about 2003, although Howard and his wife, Sally (nee Rogers) moved away to live with their three children in Ingst about 1974.

In more recent years the shop was used as a clothing shop, initially by Box 2 until 2010 and then by Tia Tia for two years until 2012.  In 2013 the shop was converted into offices and occupied by Cadman Wealth Planning.