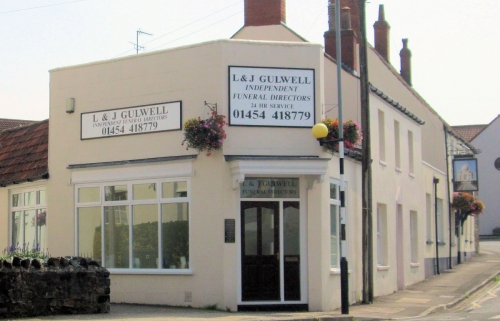 In recent years this property has been used as as undertakers, but older Thornburians will associate it with the butchers shop known as ‘Trayhurns’.

The 1840 Tithe Map shows the plot on the junction of St Mary Street and St John Street was un-developed at the time.  It was part of Plot 207 described as a house yard and garden owned by Thomas Nelmes and occupied by Ezra Amos.  Based on what we can tell from the Tithe Map, we believe that the house was on part of the plot where The Plough pub stands.  Read about the early history of The Plough Thomas Nelmes – Thomas was a pig butcher and he is listed in the 1830 Thornbury Directory.  It appears that Thomas moved to Bristol which is where he and the family were living in the 1841 census.  At some time before 1847 Thomas built a shop on the corner of St Mary Street and St John Street.  This is confirmed by an advert for the sale of Thomas’s property on 26th June 1847.

The advert on the right is interesting because it refers to a ‘newly-built detached shop, fronting the Gloucester Road’ which was included in the sale.  The implication of the word ‘detached’ implies that the house (later to be called 1 St Mary Street) which lies between the shop and The Plough had not been built – and this is confirmed by the reference ‘part of the ground having good frontage to the street presents an eligible site for Building’.  The house, garden and outbuildings must refer to the part of Thomas’s property on the the site of where the Plough now stands, but we cannot say for sure whether it is the same building.

An indenture dated 23rd June 1848 shows that Thomas sold the shop to George Thomas for £200.  Thomas Nelmes retained the house and advertised it for sale again in 1854.  Read more about Thomas Nelmes

George Thomas – on 23rd June 1848 George bought the newly erected shop on the corner of St Mary Street and St John Street for £200.  At the time George was a shopkeeper in Rudgeway.   The 1851 census confirms that they were still there.  George is listed as a grocer aged 44 from Berkeley living with his wife, Hannah aged 43 from Elberton and their children: Edwin aged 18 born in Almondsbury, Ann aged 13, Jane aged 10, John aged 8, all born in Alveston and a visitor John Bendall an unmarried agricultural labourer aged 46 from Elberton whom we know was Hannah’s brother.

George Thomas married Hannah Bendall in Thornbury on 13th March 1831.  The 1841 Census and other sources shown George was a baker.  Following the purchase of the property in St Mary Street George borrowed money totalling £250 from Elizabeth Hewitt of Marsh Common.  It appears to have funded the erection of the house between the shop and the beerhouse.  This building was being built at the time of the mortgage with Elizabeth Hewitt on 24th June 1848 and it seems to indicate that this is period when 1 St Mary Street was built.  George had some difficulty in repaying the debt and on 14th July 1859 he sold the property to Abraham Cole for £450.  The 1861 census shows George living at 4 St John Street – click here to read more

Abraham Cole – Abraham bought both the shop and the house in 1859.  He also The Court House where he was living and the adjoining building on St Mary Street which he used as a Malthouse, and The Plough.  In 1886 following Abraham’s death in 1883 his trustees sold the Plough to George Hughes.  They kept the remaining buildings until 1910.  At that time they held an auction of Abraham’s estate.  On 8th September 1910 Elizabeth Trayhurn bought the butcher’s shop and adjoining house in St Mary Street and the Court House and adjoining Malthouse.  She paid £1050 for these properties.  Click here to read about Abraham Cole

John Barber – the 1867 rate book shows John living in the house.  He may have moved to 1 Castle Street, but we don’t know any more about him.

William Cole – the 1871 census shows William was occupying the property.  He was a butcher aged 43 born in Tortworth living with his wife, Ellen aged 44 born in Wotton Under Edge and a lodger George Birt aged 30.  We can’t find any connection between William and Abraham Cole who owned the property.  Read more about William and Ellen The Trayhurns – the 1891 census shows that Elizabeth Trayhurn was now living in the property.  Elizabeth was a butcher and she had moved here from Silver Street with seven of her children following the death of her husband, George Trayhurn.  The family butchering business was to continue trading here for the next 80 years.  In 1910 Elizabeth and two of her sons bought the shop, the adjoining house, and The Court House and the adjoining Malt House.  Read more about Elizabeth and her family

The Trayhurns Brothers finally sold the property to Northavon District Council on 14th January 1977.  The Council paid £43000 for the shop and adjoining house and the Court House and Malthouse.  The Courthouse and Malthouse were demolished and the land used by the Council as part of the Quaker Court residential home for the elderly.  A new link road was built to the rear of the property joining the bottom of St Mary Street with Rock Street.  This became known as Quaker Lane and the property previously known as 1 St Mary Street became known as 1 Quaker Lane. The shop and the house have been let by the Council.  The shop was used for a short time as a cafe known as Laval’s (see photo on the right), then by an insurance broker, Greenman’s Insurance.  A shop selling bowls equipment also traded there for a short time, taking advantage in the sudden interest in bowls following the opening of the indoor bowling centre at the sports and leisure complex.

The property was taken over by Les Gulwell as the home of his undertaking business.  Les had previously worked as an undertaker with Elwyn Pitcher in his Gloucester Road premises.  Les died on 2nd February 2009.  The business continued under Les’s name.