The premises now known as The Georgian House on the corner of The Plain and Gloucester Road  has a long and interesting history.  We have been able to find mentions of a number of people who lived in it.

The very earliest known document, an indenture dated 20th March 1767, refers to the property as a ‘toft in the tenure or occupation of William Barrow’.  We have no information about William Barrow.

William Knapp appears to have to have occupied the house until just before his death in 1862.  Read more about William Knapp

Although the Georgian House on The Plain in Thornbury was actually owned by members of the Meredith family during the period from 1862 to 1898, they chose not to live there.  We have been able to trace some of the tenants of the property during this period from rate books and censuses.

William Shepherd.  The 1862 and 1867 rate books show that the house was occupied by William Shepherd.  We have no other details and so it is difficult to identify this person.  It seems possible that this was William Evans Shepherd who married Emma Screen in 1879.  There may be a link between William Shepherd and the next tenant Charles Pauley as shortly before his marriage to Emma Shepherd a settlement was drawn up appointing Joseph Staley and Charles Pauley as trustees.  This was to ensure that Emma’s income from her own property should be paid to her independently of her husband.  Click here to read more about William and Emma Shepherd

Charles Pauley.  We know that Charles lived in this house in 1871 because the census enumerator at that time referred in his description of the route to the property as ‘late Knapps house (Pauleys)’.  The 1871 census shows that the house was occupied by Charles Pauley and his wife, Sarah Ann (nee Rendell) who was thirteen years his junior.  They had not been married very long when they moved into the house as they married in the December quarter of 1868.

Their marriage was registered in Bristol, but both of them came from Hinton St George in Somerset.  Charles had been a grocer before he retired and Sarah’s family had been in the same trade.  At the time of the census, Sarah’s parents Charles and Catherine Rendell were staying with them.  Charles and Sarah had three children whose births were registered in Thornbury; Silla in 1872 and Charles and Florence in 1873.

The family had moved to Southampton by the 1881 census, where they remained until Charles died aged 91 in the final quarter of 1910.  We assume that Charles Pauley maintained some contact with Thornbury as he appears to have remained a trustee of the estate of Emma Shepherd.  Certainly the trusteeship passed to his son as ‘Charles Pauley’ was named as a trustee in the sale of her properties in 1917.

Misses Annie and Mary Paynter.  By 1881 another family had moved into the house.  This time it was occupied by a spinster lady, Miss Annie Elizabeth Paynter and her two sisters, Mary Rebecca Paynter, also a spinster, and Harriett Edwards, a widow.  They lived with a young servant, Ellen Pym, to look after them.

All three ladies were the daughters of Commander John Meyrick Paynter and his wife, Mary and they were born in Pembrokeshire.  John was in the Royal Navy and worked as a coastguard.  The 1851 census shows the family living in West Hill Villa near Dartmouth in Devon.  By the 1861 census John, now widowed, had moved his family to Main Street, Pembroke.  John died aged 75 in 1866.  The 1871 census shows Mary was boarding with an aunt in Pembroke whilst Anne and another sister, Katherine, were visiting John and Mary Griffiths in Mumbles Road, Oystermouth. Harriett married William Edwards on 8th July 1869.

We are not sure why the three ladies ended up coming to Thornbury.  There is a record of Joshua Whittaker Paynter marrying in Thornbury on 14th June 1851.  Joshua’s wife was Mary Sophia Holcombe of Thornbury.  She was the widow of Revd James R. Holcombe and the daughter of Thomas Woods, clerk of Upton Castle, Pembrokeshire.  Joshua was a surgeon, also a widow, but the interesting detail is that he came from Pembroke.  It seems likely that he may have been the uncle of the two Miss Paynters.  We know Joshua was the son of David Paynter, a solicitor.

The first reference of the two ladies living here is a mention of ‘Miss Paynter’ occupying 10 The Plain when it was advertised for sale by auction in February 1879.  We believe that the house failed to sell at this time.  The 1880 rate book shows the Paynters had moved across the road and were now living in the Georgian House.  The three ladies did not stay in that house for very long either, as they had moved by the 1891 census to Butt Lane in Morton, just outside of Thornbury.

The family appear to have been widely dispersed.  We are aware that the Lyttelton Times of New Zealand reported the marriage of another sister Jane Frances Paynter the youngest daughter of John Meyrick Paynter to Albert Bellemin.  The marriage took place on 16th January 1895 in Christchurch New Zealand.

Mary Paynter died aged 71 and was buried on 29th May 1896.  Harriett died aged 70 and was buried on 7th December 1896.  Both were living at Morton House at the time of their deaths.  The 1901 Census shows Annie moved to share a house with her brother, Parker Evans Paynter.  This house later became known as 60 High Street.  Parker was a retired master mariner aged 77.  Parker died 17th March 1904 aged 81.  Anne is not shown in the 1905 rate book which might suggest she moved outside of town or became a tenant in someone else’s home.  Anne died in Bishopston aged 87 in April 1909.  She was buried in Thornbury Cemetery on 10th April 1909.

Henry was from a well known Thornbury family.  He was baptised in Thornbury on 15th October 1845.  His parents, Henry Carter and his wife, Ann Carter (nee Whittard) were the master and mistress of the Free School in St Mary Street.  His father Henry began having children rather late in life with Ann, who was 28 years his junior, and his youngest child was born when he was 64.

The 1861 census shows Henry still living with his parents in St Mary Street and he was being trained as an architect’s clerk.  Henry seems to have been quite versatile.  In 1871 he was a solicitor’s clerk still in St Mary Street.  In 1874 Henry was described as an accountant when he went into the property business in partnership with George Mansell Williams, another accountant.  They bought the two properties at 11 and 13 Pullins Green.  This partnership lasted until 1st November 1883 when there was a deed of partition in which George and Henry agreed to split the properties.  George kept 11 Pullins Green, then occupied by Ann Carter, widow and Henry kept 13 Pullins Green, then occupied by Mark Williams.  To balance out the division Henry paid George £40.

In the last quarter of 1875 Henry married Sarah Ann Howell in the Clifton area of Bristol.  They had their first child, Augustus Robert Archibald in Clifton.  The next seven children were born in Thornbury.  They were; Walter Henry Shipway Carter, Henry William W. Carter, Miriam Louisa Carter, Arthur Edward Norman Carter, Eugene Victor Carter, Mary Annette Shipway Carter and Nina Shipway Carter.  One housekeeper, Sarah Harris, was employed to look after them all. 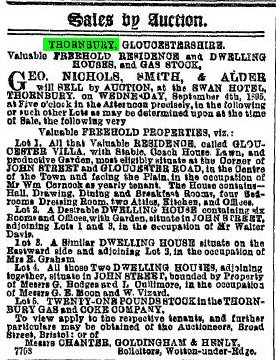 On 25th March 1877 Henry started leasing the house and garden at 58 High Street from the Borough.  In the lease, Henry was described as an accountant of Thornbury.  The annual rent was set at £20 per annum and the condition was placed that the premises could only be used as a private residence.

The 1881 census shows he was a coal merchant living with his family at 58 High Street.  He was still living there according to the 1885 rate book although that source also shows him renting The Court House later known as 2 St John Street.  We are not sure where he is in the 1890 rate book as he is listed in both The Court House and The Georgian House.  In the 1891 census describes him as living in one of these properties (we are still not sure which) as a timber merchant.

The 1901 census shows that Henry and Sarah were living apart.  He was boarding in Upper Borough Walls, Bath and Sarah was living at 74 York Road, Montpelier, Bristol with 7 of their 8 children. 1911 census he is described as a widow but Sarah Ann was alive and living at that time with her daughter Miriam and son in law.

The 1911 census shows that Henry lived at Egerton Road in Bishopston and that he was a widowed Land Surveyor.  Although Henry is noted in the census to have been a widower, his wife Sarah Ann was still alive and living with their daughter Miriam and her son-in-law.

Henry died on 16th September 1915 aged 70.  Although his name appears with his parents on a tombstone in the graveyard of St Mary’s Church, Thornbury he was actually buried in Pau Cemetery in France.

We had wondered what took Henry to Pau which was a very fashionable resort at the time and a favourite place for rich British people to retire to.  We are grateful to a descendant, Mary Howell, for giving us the reason.  Mary explained that Henry William John Carter went to Pau in France sometime between 1911 census and 1915 to stay with his son Eugene Victor Louis Carter who had married a French lady.  She has a letter written by Henry saying ‘he very much regretted going to Pau, he was very disappointed with the country, everything seemed 50 years behind the times and  the food was atrocious’.  He was hoping to return to England but obviously didn’t make it as he died and was buried in Pau in 1915.

The Thornbury rate books lists Henry as the owner and tenant of several properties in the town in the 1880s.  The probate record shows his residence at the time of his death in Pau as Blarney Cottage in Pau, although his address was said to be 2 Queens Road Ashley Down in Bristol.  It gives his occupation as Retired Timber Merchant.

William Cornock.  The rate book of 1894 shows that William Cornock was a tenant of Mark Crossman Meredith.  There is more than one William Cornock in the area.  This might be the one who who appears in the 1901 Census in West Shen in Gloucester Road.  If this is the case, in 1901 he was a 78 year old retired farmer from Aust living with his wife Anne aged 69 from Henbury and their daughter Margaret aged 25 and also born in Aust.

There was a newspaper article on 24th August 1895 selling amongst other properties a house which was then called Gloucester Villa but is now known as the Georgian House with its stable coach house and other outbuildings.  At this time the yearly tenant is still William Cornock.  The sale includes other property also owned by Mark Crossman Meredith and appears to be the selling off of his estate.  Mark Crossman died in 1894.

read about the history of the property
Toggle Sliding Bar Area