We are grateful to South Gloucestershire Council for letting us see the deeds that they hold for this house and its neighbours.  From these documents we have learned the details of some of the early owners and occupier of this property.

It is clear from the documents in the folder that numbers 10 Bath Road was built on what had once been a large close of ground called the Paddock.  Part at least of the Paddock was planted with fruit trees and became known as the Orchard.  Click here to see a plan of the original paddock and who bought the land

This page summaries the occupants of the house.  Click here to read about the OWNERS of this house

Richard Greenwood – at the time of the 1840 Tithe Survey the house and garden was referred to as Plot 114 which was owned by John Dorney and occupied by Richard Greenwood.  The only Richard Greenwood we have traced in the 1841 Census was a sawyer aged 25 who was then living in Colwell Street (what we now know of as The Plain).  His wife was Sophia aged 35 and they had one son, Edwin aged 3.  Click here to read more

Henry Sargeant (or Sargent) – the 1859 and 1862 rate books and the 1851 and 1861 censuses show the house was occupied by Henry and Mary Sargeant.  Henry and Mary had married at Thornbury St Mary’s on 4th January 1847.  They had both been widowed.  The marriage record shows that Henry was the son of Richard Sargent, a labourer and Mary was the daughter of Thomas Limbrick, labourer.  Mary may have been the Mary Lanfear who had earlier lived in 5 Gloucester Road.  Click here to read more

In the 1851 census Henry was a journeyman wheelwright.  Living with them were Mary’s daughter, Edith Lanfear a general servant aged 28 born in Tiverton, Charles Lanfear who was baptised in Thornbury in 1840 and a lodger, Richard Gale, a widowed Chelsea pensioner aged 83 from West Littleton.  The 1861 census shows Henry was a master carpenter aged 67 from Yate.  Henry was living with his wife, Mary aged 64 from Thornbury and two lodgers, Charles Williams and John Mitchell who were journeymen cordwainers.  Mary died aged 74 years and was buried on 1st March 1870.  We don’t know when Henry died.

William Fry – the 1871 census appears to show that William Fry was living in the house.  William was a cordwainer (shoemaker) aged 35 from Wellington in Somerset.  He was living with his wife, Mary Ann aged 31 from Hanham and their children: Lucy Ann aged 12, Emily aged 11, Fanny aged 9 and William aged 5, all the children were born in Thornbury.  We can’t be sure but we suspect that William was baptised in Wellington on 9th February 1834.  He was the son of Aaron and Elizabeth Fry.  William married Mary Ann Coole in Bristol in 1858.  Mary Ann was born in Hanham on 12th June 1837, the daughter of Samuel Coole and his wife, Hannah (nee Bees).

We have no record of the family after the 1871 census.  According to a family tree on the Ancestry website the family emigrated to America.  The tree shows that William and Mary Ann had another daughter, Mary Ann, born in Quincy, Mass. on 9th June 1874.  Tragically their daughter died and Mary Ann, the mother, died a few weeks later on 29th July 1874 aged 37.  William married again in Woolaston in 1876 – his second wife was Ellen M Lester.  They had one son, Harry L born in Woolaston on 13th April 1880, but he died on 18th October 1880.  William and Ellen continued to live in Woolaston and he died there on 25th December 1922 aged 89.

They were still living in 10 Upper Bath Road in the 1885 and 1887 rate books.  He was using the stables at the rear of the property that had been the Beaufort Arms (57 High Street).  In 1888 William took over as licensee at the Queens Head in the High Street.  William and his sons were subsequently connected with several pubs in Thornbury as well as operating a carrier service to Bristol.  Click here to read more about them

Charles Prewett – the 1890 rate book and the 1891 census shows the house was occupied by Charles Prewett.  The census shows Charles was a labourer and gardener aged 31 living in the house with his wife, Elizabeth Amelia aged 31 from Bristol with their children: Emma aged 6, Mabel A aged 4 and Charles aged 3 and an aunt, Hester Walker, a widow aged 86.  Click here to read more about Charles and Elizabeth

Sam Barge – the 1899 rate book shows the house was occupied by Sam Barge (shown in the photo on the right below).

Sam was born in 1857, the son of Thomas Barge and his wife Mary (nee Bendall).  In 1874, Sam had married Emma Fowler who had been baptised on 25th May 1851, the daughter of Kesiah from Crossways.  Sam and Emma had three children: Leah Matilda baptised 17th October 1875, John Lawrence baptised on 5th June 1887 but only survived 3 months, and Arthur John baptised on 1st July 1888. 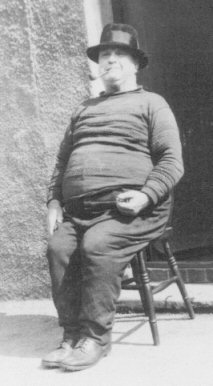 An interesting report of Thornbury Police Court for November 1903 says “At the police court, on Wednesday Samuel Barge, Henry Smart, William James, Henry Jefferies, Thomas Cornock and William Ball for obstructing the highway at the entrance to Chapel Street Thornbury on the 29th ult. by standing thereon for 10 minutes and preventing persons passing, were each fined 6d and 4s costs.”  Luckily standing and chatting in Thornbury High Street these days no longer attracts a fine.

In the 1905 and 1910 rate books Sam was listed as living in 47 St Mary Street.  The 1911 census shows Sam and Emma in St Mary Street and their son, John, a chauffeur aged 22 was living with them.  Emma Barge died aged 60 and was buried on 30th December 1912.  The electoral registers from 1918 to 1931 show Sam as still living in St Mary Street so he may have been living in the same house.  The Western Daily Press of January 11th 1918 shows that Mr S Barge had been the purchaser of the house in Castle Street occupied by John Barge.  We assume that shows that Sam bought the house that became 34 Castle Street for his son John.  Sam died aged 79 in 1933 and was buried in Thornbury on 25th March.  The Thornbury trade directories from 1914 to 1935 show Sam as a bill-poster living in St Mary Street.

Of Sam’s children, we know that Arthur John Barge (or Jack as he was known) became a chauffeur.  Click here to read more about Jack

Thomas Boulton – in 1901 the house was occupied by Thomas Boulton, a retired postman aged 62 and his wife, Mary A aged 68.  Thomas was born in Kington about 1838.  We have had problems linking Thomas to his parents.  The most likely Thomas was living in Kington in the 1851 where he is shown as being an apprentice shoemaker aged 12.  His parents were John Boulton, an agricultural labourer from Kington and his wife Susan who came from Frampton Cotterell.

Thomas obviously didn’t take to shoemaking.  By 1861 he was living in Regent Street, Finsbury, London where he had become a letter carrier.  He was also now married – his wife was Mary Ann aged 27 from Westbury on Trym in Bristol.   There is a record of a Thomas Boulton marrying Mary Ann Smith in Bristol in 1860.  Thomas’s mother, Susan was visiting Thomas and Mary Ann at the time of the census.  She was described as a midwife aged 61.  She died in August 1861 aged 62 and was buried in Thornbury St Marys Churchyard.  Her husband, John died on 14th October 1869 and is buried with her.

By 1871 Thomas and Mary had moved to 57 Shepherdess Walk, Shoreditch in London.  Thomas had become a ‘Letter Carrier E.C.D.’ and he and Mary Ann had four children: Ernest W aged 9, Jane aged 6, Elizabeth aged 3 and Arthur aged 1.  They also had a niece, Eliza Holden aged 14 from Westbury on Trym who was acting as nursemaid and there were two lodgers.  In 1881 they were still living in the same house.  Their children had slightly different names, Ernest B was an unemployed printer’s assistant aged 19, Jessie was aged 16, Elizabeth aged 13 and Arthur aged 11.  There was one extra child, Walter aged 9 and two lodgers.  In 1891 they were still at 57 Shepherdess Walk.  Arthur had become a letter carrier like his father.  Walter was an auxiliary carrier and Elizabeth a bookfolder.  The other children had left home.

The 1901 census shows that Thomas and Mary came home to Thornbury when he retired.  We don’t know when Mary died, but by 1911 Thomas was a widower.  The 1911 census describes Thomas a ‘post office pensioner’.  He is living in the house with just a housekeeper, Blanche Brooks, unmarried and aged 64 from Thornbury.  Thomas was listed as living in the house in the 1915 Prewett’s Directory and is mentioned as the tenant when the house was put up for sale in 1916.  Thomas died in 1917 aged 78 years.  Blanche died in 1932 in Gloucester but was buried in Thornbury on 30th November.  The 1925 valuation list shows that Henry Boulton was the occupant of the house.

The Staffords – the 1926 rate book shows that the house was occupied by ‘R. Stafford’ and the electoral registers show that the family of Robert and Emma Stafford lived there between 1927 and 1935.  Click here to read more about the Staffords

The Wilsons – from about 1938 until the time when the house was demolished about 1960, it was occupied by the family of Harry Wilson and his wife, Gertrude Annie (nee Davis).

The register compiled in 1939 in preparation for the war shows Harry and Gertrude were living at 10 Upper Bath Road.  Harry was described as an ‘aircraft fitter of gun turret pumps’.  He was born on 16th April 1912.  Gertrude was born on 12th July 1906.

We understand they had a son, Peter Wilson born in 1938.  He went to Thornbury Grammar School.  The 1965 electoral registers shows that Harry had moved to 15 Buckingham Parade where he was housed by the Council after the house in Upper Bath Road was demolished.  There was no sign of Gertrude at that time so she must have died.